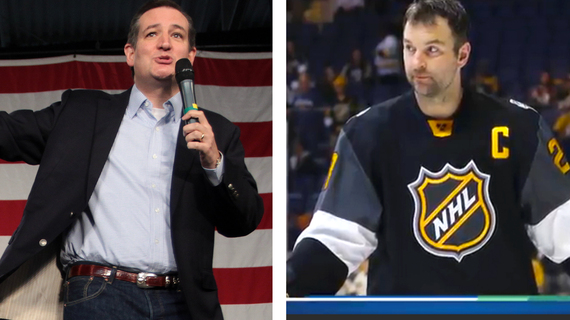 We found ourselves this week talking about two very different guys, both born in Canada, who skated to triumph thanks to their fans.

If you follow hockey, you have already guessed the name of one of them: John Scott, the 6'8," 275 lbs., unlikely Most Valuable Player in last Sunday's NHL All-Star Game. As Kelly McEvers put it on NPR's All Things Considered, Scott is a "goon-made-good." She was invoking hockey slang to describe an enforcer -- the "goon" who is charged not to score goals but to knock heads. A professional brawler, if you will, who relies more on brute force than technical skill. He protects his teammates by starting a fight; defends the goaltender by starting a fight; and entertains the crowds by, yes, starting a fight. Scott was a "journeyman" to boot, meaning that he travels from team to team and isn't considered an elite player. Essential, yes; elite, no. Sort of like the bouncer at a nightspot.

Goons are the unlikeliest candidates for the All-Star Game and you have to scratch your head to remember the last time one made it. But John Scott's fans adore him, and they voted him into last Sunday's game over the protestations of the NHL brass, who seemed to loathe the very idea of a low-life in their big showcase competition. When officials stepped in to try to stop him, even sending him briefly to the AHL, the minor league of hockey, these regular-guy fans went crazy. As Greg Wyshynski of Yahoo Sports told McEvers, "A chaotic group of miscreants and NHL fans on Reddit and social media pushed John Scott to the top of the popular vote."

How did they do it? They took to the Internet, campaigned hard, and overrode the NHL to secure Scott's berth. Not only did he score two goals for the victory, his teammates hoisted him aloft (all 300 lbs. of him with his gear), his fans voted him MVP, and the NHL brass had to hand him the gold, a million dollars in prize money. By the end of the night, Scott was the people's champ -- an everyman's hero, triumphing despite hockey's elite snobs doing their best to keep him down.

Now if you follow politics (as of course you do) you know the other Canadian-born guy in this story is Ted Cruz. He is another kind of enforcer who is always spoiling for a fight. Instead of brawling on the ice, he brawls in the courts, on the Senate floor, and on the campaign trail. In Iowa, if they had wanted an enforcer, you might think the call would have gone to Donald Trump. But Trump is merely a bully who bungles scripture. Cruz is a brute, the Crusader Warrior, armed with spike and shield and holy zeal, summoning true believers to war against the infidels. Deus vult! they cried out in those days. "God wills it!"

Unlike John Scott, who is said to be a nice guy, and humble, there's malice in Ted Cruz's swagger. When the Christian right in Iowa bested Trump and the GOP establishment on Monday, lofting him to victory, he shouted to the exultant worshippers, "To God be the Glory" -- his self-referential pronouncement that a new Messiah had come to town.

Yet while Cruz may have won Iowa fighting the GOP elites, he's no outsider, and he's no down-to-earth "journeyman." There is hardly an all-star team that he hasn't made: Princeton, Harvard Law School, Supreme Court clerkship, boutique DC law firm. As a teenager he told people he intended to be president. With a sharp mind and sharper elbows, he has always been determined to win MVP at all costs, never backing down from a fight, or an opportunity to climb higher.

Now, there's nothing inherently wrong with ambition, but here is another striking difference between John Scott and Ted Cruz. Even as the fiercest of enforcers, Scott remains a team player. As he says, "I make my teammates feel safe to do what they do best."

Ted Cruz is no team player. He's out for no one but himself. And he has a history of switching teams until they fulfill his ambitions.

Cruz was on George W. Bush's team for the Florida recount in 2000, helping to stop the vote tallying there before Al Gore could be declared the winner -- an ambitious 29-year-old gunning for a top post in the White House. When he didn't get one, Cruz wrote in his 2015 autobiography that it was "a crushing blow." He landed a job at the Federal Trade Commission instead.

Cruz didn't stop fighting, but when his colleagues still didn't value him as he thought he deserved, he switched leagues and went local back in Texas. As the state's solicitor general, he began climbing the political ladder again, eventually considering a run for Texas attorney general. And when he saw an opening on the tea party team in 2012, he used it to campaign for the US Senate, picking fights with the Washington establishment that he felt had rebuffed him, and scoring an upset victory.

Once in the Senate his goon-inspired behavior soon antagonized just about everyone, including his fellow Republicans. No one was beyond the reach of his brass knuckles, sharp elbows, and forked tongue. He fought against the Affordable Care Act (including a 21-hour rant on the Senate floor), immigration reform, Planned Parenthood -- and against the Anti-Christ, Barack Obama.

Now, to win the White House, Cruz has switched to the God Squad. He is the new Chosen One. His ground game in Iowa relied on scores of fundamentalist clergy, hundreds of volunteers, and his own father, Rafael, a Texas pastor who told a Christian TV channel that his son's race for the White House was divinely inspired by the Holy Spirit.

It is as calculated as any of his previous plays. Robert Draper, in The New York Times Magazine, did the math: "Of the 22 states that will be casting their ballots for a Republican nominee between Feb. 1 and March 5, 11 of them feature a Republican electorate that is more than 50 percent evangelical. Even more significant, the first state to vote is Iowa, roughly 60 percent of whose Republican caucus-goers describe themselves as evangelical Christians."

Let us pause, and think upon the words of 18 century satirist Jonathan Swift, a man so versed in the vagaries of faith he served as dean of Dublin's St. Patrick's Cathedral:

But mark me well; Religion is my name;

An angel once, but now a fury grown,

Too often talk'd of, but too little known...