Spend some time cruising around the Aegean Sea, and it's not hard to slip into the adventures of Odysseus on his long trip back to Ithaca from the Trojan War. You can almost see yourself battling a three-headed monster on one island, steering clear of the Sirens on another and matching wits with the witch-goddess Circe (who turned you and the rest of the guys into pigs for awhile) on still another.

This story is about two islands poking out of the Aegean, one known for its good times and another -- just a few minutes away by boat -- for its old times. 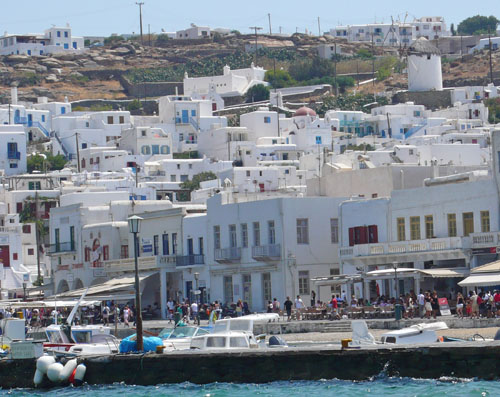 The swinger of the pair is Mykonos, dubbed "the place where the world goes to party." Merry-makers pour in almost around the clock on jetliners and private planes and on an armada of water ferries, yachts and small boats from the Greek mainland.

During the day, thousands of tourists jam the outdoor tables of wall-to-wall tavernas lining the island's beachfront village. Other visitors take up so much room on the beaches -- including "clothing optional" stretches here and there -- it's hard to see the sand.

It's at night, though, when Mykonos really comes alive. Dozens of bars such as Speedance Experience, Galleraki, Nine Muses and Skandinavian are packed through the morning. There, dreadlocked DJs whip the crowds into frenzies with tunes running from the disco hits of the old-time Village People to the techno blitzes of bands like Apokolypse and BlueZeus.

After that, it's back to your hotel, inn or villa for a few hours of sleep before another day of people-watching from the tavernas and trying to elbow in on the beaches. And then another night of flipping your arms to "YMCA," belting down shots of ouzo, whooping it up on table tops and trying to get the hang of Zorba-style line dancing.

Staying there: The island offers some three dozen tourist-class hotels, typically in the range of USD $200-$300 a night. 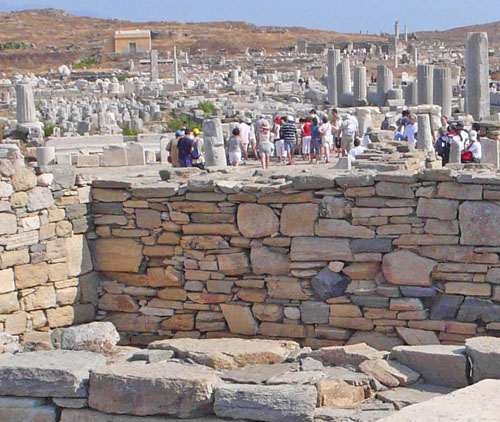 The Greeks love a good legend, and none more than the tale of how their sacred island of Delos came about. One version of the story goes back to 3,000 B.C., when the big buzz on Mt. Olympus was that Zeus, the god of gods, was about to become a proud daddy, thanks to his girlfriend Leto. The dad-to-be's delight, however, wasn't shared by Mrs. Zeus -- who let it be known that anyone who allowed the shady lady to give birth on his turf would be turned into a frog.

But Zeus wasn't the top god for nothing. He got his brother Poseidon, god of the sea, to simply push a new island out of the waters. And up came Delos, where the Greek superstar Apollo and his twin sister Artemis first saw the light of the bright Aegean sunshine. 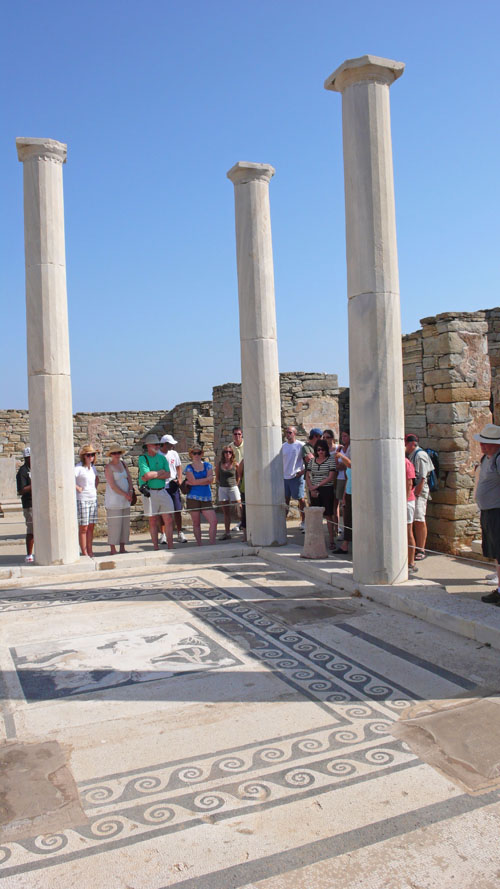 Temples had to be built to mark that event, of course, and along with them homes, courtyards, fountains, sports arenas, theaters and even what amounts to shopping malls. Delos soon became the religious hot spot of the Aegean, a distinction it held for a thousand years.

Fast forward to today, and ferries full of tourists from nearby Mykonos start arriving at Delos around 9 a.m. Visitors are free to explore the island's archaeological wonders until 3 p.m. (about the time some merry-makers back on Mykonos are getting up) when everyone has to leave the island.

Among highlights of the ruins is the much-photographed Terrace of the Lions (dedicated to Apollo around 600 B.C.). Other big draws include the House of Dionysus (a 2nd century B.C. private home) and the Platform of the Stoibadeion (dedicated to the Greek god of wine and pleasure Dionysus, also known as Bacchus).

Archaeological items too precious to be left outside can be seen in a museum on a hill overlooking the main section of the ruins. Next to the museum you'll find visitors lined up at a little snack bar (the only one on the island) offering -- at outrageously high prices -- fresh orange juice, watermelon pieces and sandwiches. 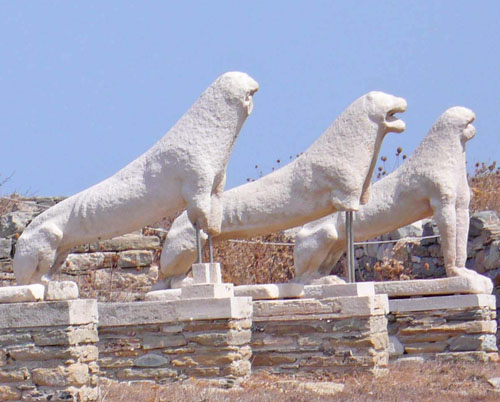 All four images by Bob Schulman