My brother's partner came into our lives when my oldest daughter, Izzy, was 3 years old, months before I became pregnant with my second child. Ingenuous and trusting, Izzy led him by the hand into her bedroom and spent the next 20 minutes doing puzzles with her new "best buddy," Brandon. To this day, over four years later, she still refers to him as her "best buddy," and always rushes to greet Brandon before she hugs her biological uncle. In the months that followed their introduction, a baptism by play, I wondered if my preschooler would ask me why Uncle Brian always brought Brandon along when he visited our home. I found it difficult to gauge exactly how much she understood about their connection; the greater challenge was determining whether I was supposed to do something to illumine the nature of their relationship.

By the time they had been together long enough to refer to them as "the uncles," my daughter had turned 6, and it seemed awkward to initiate a conversation on the details of their partnership. It seemed a bit like asking someone's name after you have spent months sitting next to her at PTA meetings and it was implied that you already knew it, because clearly, she knew yours. What's the statute of limitations on bringing up questions that should have, theoretically, been answered years earlier? 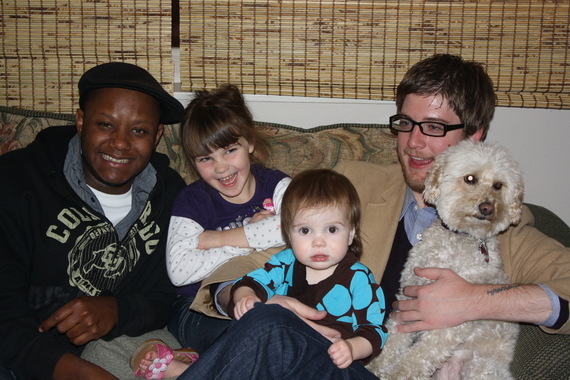 Explaining the partnership of the gay uncles seemed to fall into the list of topics that I kept waiting to arise -- but never did. The complicated, multi-layered conversations such as, "From where, exactly, did my baby sister exit your body?" and, "How precisely did she get in there?" or maybe even, "Why do I have so many grandmas?" I was certain, with her constant chatter and never-ending curiosity, that we would be broaching these delicate subjects sometime soon, but I never wanted to push those crucial discussions about reproduction, divorce or the mechanics of childbirth before it was time.

In the same vein, it seemed disingenuous to insist on a formal debriefing on same-sex relationships, but I worried that by avoiding educating my daughter, I would be inadvertently sending a message that I was uncomfortable with their relationship, or that there was something innately wrong with gay partnerships. The last thing I wanted was for our family to unconsciously bury the uncles' sexual orientation as one of the "things we don't talk about." I knew that our daughters would grow up supporting gay rights and feeling proud that their uncles were an important part of the family; I just didn't know when we would teach them about gay marriage, court rulings and prejudice.

Truth be told, I had absolutely no idea whether my 6-year-old intuitively grasped the fact that the uncles are together. I continued to wait for a day when my daughter might ponder aloud, "Hey Mommy, I know that Uncle Brian is your brother, but why is Brandon my uncle, too?" or maybe, "Why doesn't Uncle Brian have a wife? Why does he live with Uncle Brandon?" Then one day, the opportunity naturally presented itself. On an early morning drive to school, my burgeoning young reader, with her infinite creativity, began reading the exit signs aloud. "What if Kipling and Ward got married?" she began, inventing her own interstate love story. "Which one do you think would be the boy? Kipling or Ward? Is Kipling a girl's name or a boy's name?"

I saw my moment, and I seized it.

"What if Kipling and Ward were both boys?" I asked her tentatively. "Could they still get married?"

"No," she said dismissively.

"Actually, yes, they could," I replied, ignoring the nauseating legal technicality that in our state, no, they couldn't. "Boys can marry boys, and girls can marry girls, if they love each other."

Yes, I thought. She does get it.

"Did Uncle Brian and Uncle Brandon have a wedding?" she asked, "With flowers and music?"

"No," I answered, "Not yet. But maybe someday they will."

My youngest daughter is not yet 2, and such questions would never occur to her. I recently observed a fascinating phenomenon; my toddler seems to believe that the uncles share the same name. I was curious why she only talked about "Bandon" and never mentioned my brother, so one day, as she sat between them on the couch, I asked her, "Where's Uncle Brandon?"

She looked slowly back and forth between the two of them, unable to respond, her mind having thoroughly been blown. Given the fact that my brother is 6'4, bearded and as white as humanly possible, and his partner is average height, clean shaven and Black, it would be hard to imagine she has somehow mixed them up. Rather, she appears to perceive them as one entity. In her tiny brain, her uncles are united.

Since our illuminating car ride discussion, the uncles have become engaged. They plan to get married next spring, after Brandon completes his graduate program. I can only hope that by the year 2015, our state legislation will have caught up with the benevolent, intuitive brain of my toddler, and she can walk down the aisle, in her home state, as their flower girl. 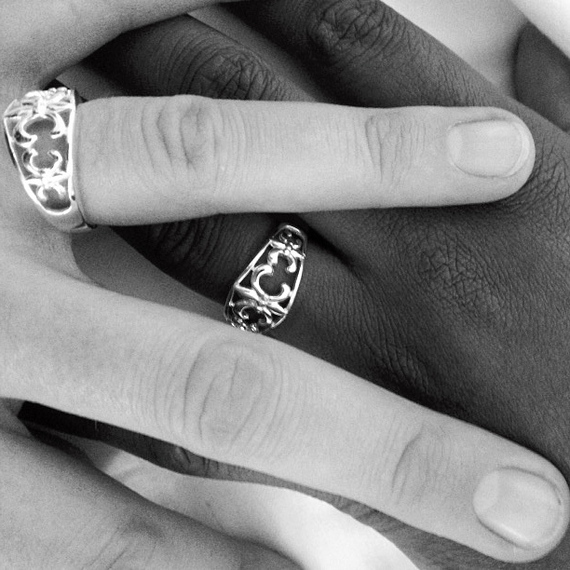 A version of this post originally appeared on The Epistolarians.