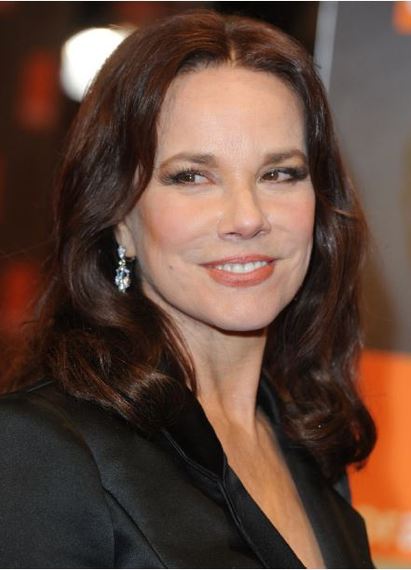 Barbara Hershey is a multi-award winning actress who has been gracing us with her presence on the big screen for quite some time. She is an Emmy and Golden Globe Award winner for Outstanding Lead Actress in a "Killing in a Small Town" and was nominated for an Academy Award for a "Portrait of a Lady" as well as a BAFTA award for "Black Swan". In the 1980's Barbara was at the height of her career. She has played many roles, from "The Stunt Man", "The Right Stuff" to "Hannah and Her Sisters" with Woody Allen, and "Hoosiers" with Gene Hackman and Dennis Hopper, Barbara is the epitome of what it takes to have a lifetime career pursuing your dreams and doing what you love. From her award winning role in "Anne of Green Gables" for PBS for which she received a Gemini Award to co-starring opposite of Rose Byrne and Patrick Wilson in "Insidious" Barbara's gift of acting is beyond amazing.

I had an opportunity to speak with Barbara about her long-standing career and to find out what's next for her.

ABCs "Once Upon a Time" is an amazing show, so let's talk about your return to the show this season.

I was in two episodes this season. I was truly excited about it because I was asked to do more than I'd ever been asked to do before on the show. It was really an exciting show to get to do, and a very emotional show. They're wonderful people and I enjoyed doing it and touching base again.

You play the standout character Ann Rutledge on the A&E series "Damien", what has your experience been like?

Well one of the things that attracted me to it was the question, 'what would you do if you found out you were the Antichrist?' because we are starting with the iconic version of the film, the first one with Gregory Peck and Lee Remick and not dealing with any other sequels or anything since, and the little child at the end of that first film that looks at the camera and smiles, is Damien. This is him all grown up and during that period, the human part of him blanked out who he was. He couldn't deal with it. He then found himself always drawn to pain so he became a war photographer. He's now thirty years old. My character Ann Rutledge, has been in the shadows his whole life guiding him and protecting him, unbeknownst to him. He's not aware of her at all, and at this moment she steps out of the shadows and lets him know who he is. But we approach this like the original film in that we approach it realistically. It's much more like a psychological thriller with edges of horror rather than out of horror. We deal with a lot of interesting issues about good and evil and what is preordained and what isn't. I find it very interesting and very surprising. The words Antichrist and Damien bring certain images to mind, but the show doesn't really go in the obvious direction.

You've had a long a successful career, what has been your best and favorite role?

This is a very hard question to answer. I have five or six favorite roles and then as soon as I say that, I feel disappointed that I didn't say something else. It's hard. It's like picking your children and saying which one you like best. They're all a part of me and it's a difficult thing to pick.

Let's talk about "Black Swan" and how amazing the film was and your role in that.

I really loved the film. I don't think I ever worked on a film where I had less of an idea of how the actual film was going to turn out. I don't mean in terms of good or bad but in terms of my performance specifically, but the film itself. Darren's way of directing is getting a lot of different varieties on a scene so you do lots of takes that are different from each other, and then he puts it together. The first time I saw the film, I didn't know what the effect of my character was going to be. Especially that film because you're looking at the movie through the eyes of someone who is going insane. It's a subjected film. The character's version of that is very warped and accelerates. You're not just presenting a character, you're presenting what's going on and her perception of what's going on kind of at the same time. It was a fantastic film to do and Darren is a really huge talent and wonderful to work with. It was intense. I came in the last three weeks of filming after they had done all of the ballet and everyone was pretty exhausted.

How did winning an Emmy and Golden Globe Award, change the direction of your career?

I don't know if it did. I won the Cannes Film Festival twice too. It doesn't seem to affect anything with me. I haven't noticed any difference. But on a personal level, it has meaning. Film actors actually act in a vacuum, since they don't have an audience. When you do get an award, it's kind of an undeniable circumstance where you have to admit what you did which is gratifying. But I always think acting awards are writing awards anyway.

What's next for you and do you have any aspirations to work behind the camera?

I don't know what's next which is often where I've been in my life and that doesn't bother me but I have to stay in a state of openness. Hopefully "Damien" will get renewed and that will be next, but you never know about things. And behind the camera, I don't know and I don't think that's a good enough answer to step behind the camera. I think you have to know. Sometimes I think it would be good but I don't know. It's not a big aspiration. I've always been just an actor. That's my love.