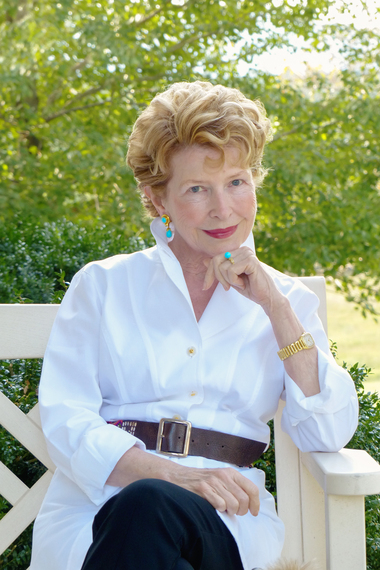 Nine years ago, Jan Karon, the author of the hugely popular Mitford series of novels, announced that Light From Heaven (2005) would be the last Mitford book. Now, she's back with a new Mitford novel featuring Father Timothy Kavanagh and his wife Cynthia, along with the rest of their family, neighbors and friends set in this fictional North Carolina town. The series has sold many millions of books and there's no doubt that untold numbers of Jan Karon fans are ecstatic about the publication of Somewhere Safe With Somebody Good

After nine years, what made you return to the Mitford series?

I had a lot of prompting from my fans, who are very vocal about what they want. I don't always listen to them because any novel has a life of its own. I want always to be true to what I'm led to write. I was impressed that over the years, so many people asked for another novel set in Mitford. I think readers missed the character of the village of Mitford itself. I pondered it in my heart and realized I wanted to go back, too. So, I did return and had a wonderful time writing this book.

Why do you think this series about small-town life has sold so many millions of books?

Of course, there are many reasons. I think one important factor is that when we turn a corner in Mitford, we know we're not going to be raped, robbed or experience murder and mayhem. There will be problems -- illnesses, disasters of all sorts -- but we can trust the author. My fans say they can place trust in turning a blind corner with me and know they will not be horse-whipped by some flagrantly ugly situation. It's a safe place.

Father Tim, now in his early 70s, is struggling with the challenges of retirement. What does this novel say about this stage of life?

I think everybody's going to have a different take on that. I do know about the struggle with being retired. It has a very dirty reputation, as you know. Men, particularly, struggle with it because very often their entire identities are wrapped up in their work. So, it's a time to really let go, which in itself, is scary. But we can learn how to be not retired from life, but really retired into life--into something more visceral and wonderful, open and promising. I'm seventy-seven and not retired. I'm still working like a hound dog. And I look forward to the work. Father Tim has struggled with this issue for a long time. He had to retire at sixty five because he had complications with his diabetes. He's learned how to control it, and his wife, Cynthia, keeps after him like a stinging bee.

Somewhere Safe With Somebody Good is such an appealing title. What does it mean in this story?

It means if you were to walk into anybody's life at any moment, that person would be looking for a safe place to be with somebody good. It's something we all long for. Some of us have found it with another person. Many have found it with God, with His consolations. Some are able to find it with both God's consolations and those of a mate. The world is an unsafe place. We know that. It probably always has been. But I think right now, in our culture, we've reverted back to the Wild West.

So what do we want? We want to be somewhere safe with somebody good. Father Tim's wife, Cynthia, wrote this in a letter to him. She proposed that they write love letters to each other as they did when they first met. He was aghast; he didn't want to do it. In her letter to him, she said she had found that place with him -- somewhere safe with somebody good.

Is this novel in some ways a commentary on modern life in America?

When I wrote the novel, I didn't have any particular agenda in mind. In fact, I almost never do. I go into a novel -- and pardon me for sounding a bit corny -- but I go into it with my whole heart. I just go where it leads me. I go where I need to go. I do believe fiction writing is simply a way of processing the author's life. The best way to get to know me is to read my work. It's more revealing than I'm going to be if we were to sit and talk over dinner.

Is there beauty in what some would term "the ordinary life"?

There is deep, resonant, lovely, tender beauty in the ordinary life. It's also in the extraordinary life, but I'm more interested in capturing what happens to the person on the street; the woman at home; the one working in a flower bed or trying to raise her grandchildren. I just want to know what goes on with the common person. I find great might in that.

Readers and reviewers have said reading the Mitford novels has made them laugh and also cry. How does that make you feel?

I think that's terrific because writing a Mitford novel makes me laugh and cry. I think it was Carl Sandburg who said, 'No surprise in the author, no surprise in the reader.' But I also think, 'No tears in the author, no tears in the reader.' And the same thing goes with laughter. I try to write so much from the heart, and people just get it. It flows from my bloodstream into theirs. When I write, I laugh out loud and I weep. when I write. I grieve the death of one of my characters. When I'm with my characters, I'm totally committed. So, I hope I can take my reader there, too.

Somewhere Safe with Somebody Good partly addresses dealing with life changes. You made a major life change, leaving the advertising world. Will you tell us about that and the challenge you faced?

I'm telling you, it took such guts to do it. You've got a steady job; a good business reputation; you've worked hard; you have health insurance coverage; and a steady paycheck, and all of a sudden, you say, 'I just can't do this anymore.' I'd wanted to write a novel since the age of ten. I wasn't getting any younger. In fact, I was fifty. So I prayed ardently for two years, and finally got the green light to quit my job. Let me tell you, there's no hallelujah moment when you step out over the cliff.

For the first few years, I had great difficulty writing a novel. It was all new to me and I had much to learn about the process. `And then, once you've written it, just try to sell it. People were scared to death of touching it: there was a Christian protagonist who was actually a likable guy, and nobody was writing that sort of thing. So, here was a whole new genre the publishers decided to avoid. There was a long period when I was actually hungry. People say, 'Reading one of your books makes me hungry because there's so much food in them.' It's because I was starving when I was writing them. It was not an easy time. When making an important life move, we need to get over the expectation that the transition will be stress-free. But, what I can promise is that it will be worth it.

What about writing has surprised you over the years?

I think what's surprised me is how much fun you can have writing. And also, how much torment it can be. There's torment in trying to craft a novel, trying to get the timing just right so it falls upon the ear or the spirit in just the right way, as does a piece of music. Just the book's title, Somewhere Safe with Somebody Good has rhythm, is musical. If it doesn't feel right and isn't in some way balanced, I've got to reconstruct it. There's a lot of torment in that. Also, you can't separate your writing life from your actual world. Your real life keeps intruding. It's very jealous of your writing life. It says, 'Who am I? Chopped liver? Real life comes after you while you're trying to write a book.

I love my work. There's much joy and laughter, but there are tears, too. It's hard work to write a novel.

It would seem that sometimes, life gets in the way.

Have you had difficulty relegating time between your real life and your writing life?

The trouble is I can't relegate time for writing. That's what you're supposed to do, and many authors have successfully done it. But for the last decade and a half, it's been very difficult to relegate time to my work because my life is so demanding. But the demands of this life make the writing much juicer. I mean, when you think you're on your last leg, if you wait and work at it, you will get it right. People ask, 'What if you don't have anything to say?' I say, 'Sit down and write anyway, because something will come to you. And typically, it's going to be pretty good.'

Are you saying in part that conflict -- whether in your own life or in your characters' lives -- makes for a juicier novel?

I think so. That's what I'm learning more and more as I go along. As I said earlier, I believe the author processes his or her life through fiction. If we process a demanding life, something juicy happens in the fiction. I don't know how to explain it. It's a mystery.

Speaking of mystery, do you ever take your own novel off a shelf and wonder where the dialogue and descriptions came from?

I do. You hit the nail on the head. You must be writing a novel. (Laughter) But I sometimes see things in there I'd like to change -- especially all those exclamation marks. Yes, I do often wonder where all this stuff comes from.

What's coming next for Jan Karon?

I don't want to throw in a spoiler, but I think the end of this novel directs the reader to what's coming next. I would just say that Father Tim will be very much alive as long as I'm writing. The story will carry into the next generation. It would be time for that in real life, and it's time for that to happen in my fiction.

Congratulations on writing Somewhere Safe with Somebody Good and thank you for bringing readers back to a fictional town that resonates so deeply in people's hearts.