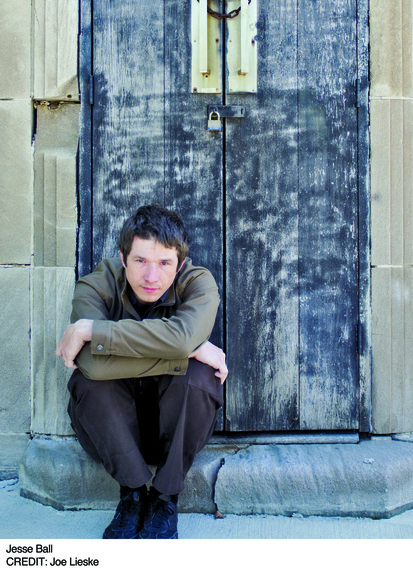 Jesse Ball's new novel Silence Once Begun has just been released by Pantheon. His three previous novels are The Way Through Doors, Samedi the Deafness and Curfew. He's also written several works of verse. He won the 2008 Paris Review Plimpton Prize and is the recipient of a 2014 National Endowment for the Arts Creative Writing Fellowship. He teaches at the Art Institute of Chicago's MFA Writing Program.

Silence Once Begun concerns a Japanese fishing village where eight elderly residents have disappeared. Although he didn't commit a crime, Oda Sotatsu signs a written confession prepared by Sato Kakuzo. He's arrested, tried, convicted and sentenced to death, yet remains inexplicably silent throughout this ordeal. The novel is written as a series of transcripts of interviews with those who knew Oda, providing different versions of what may have happened.


Why this format for telling this intriguing story?
In typical novelistic structure, a speaker narrates a story. A burden falls on the speaker to give a continuous, sensible narrative. In Silence Once Begun, I wanted to portray the gap between different accounts. There are many versions of the world -- many viewpoints -- and when they collide, there's a separate, special space created. A different meaning resides there, in that space.

Are you saying multiple perspectives can give a more truthful picture of what happens than the version given by a single narrator?
Certainly. The idea of a single viewpoint is problematic. Let's say I was going to call you. You had an idea of what would happen, but really, you had many ideas of what could happen. There was the possibility we might not have talked at all. Perhaps I'd be in a train accident and would die; the call wouldn't happen. Different potentialities exist simultaneously as we contemplate the future. It's difficult to cull from these possibilities, only one viewpoint. This forms the basis for the narrative of our lives. I'd rather not reduce the plurality of existence to a single viewpoint.

In that sense, I think your novel says a good deal about what we construe to be "truth."
I would humbly resist such generosity (laughter) but I think it's true. It's certainly something to seek out -- as a human being -- to have empathy for all possible viewpoints. I guess it means trying to see any one situation from above.

Some reviews have compared Silence Once Begun with Rashomon. Did that come to mind while writing this novel?
I didn't actually think of it when I was working on it, but I always loved Rashomon. I've always favored anything that creates a more accurate, or should I say, ambiguous picture of things.

Some people have said this novel indicts the Japanese criminal justice system. Others compared it to the movie The Life of David Gale. Did you intend either?
Justice is a grander version of fairness. Certain things appear fair in one culture but not in another. When you codify rules about how people should behave and live together -- in any justice system -- punishment becomes part of the equation. There may not be a better world than the one we currently inhabit. Still, it seems right to speak about those things that are inconsistent with kindness and compassion. In many parts of the world, things could be handled in a more rational and gentle way.

It's hard to know if the Japan in Silence Once Begun is Japan itself. I mean, is Kafka's America our America? I would hesitate to say yes. I think the novel's Japan is that of my imagination. It's the gathered world of Kobo Abe and other Japanese writers, combined with my hopes and dreams. On a political level, it's hard to say more than that. However, we have all these intellectual constructions of justice which are delightful to explore. The very peculiar Japanese justice system is endlessly fascinating to me.

The novel's narrator investigating this strange case is named Jesse Ball. He wants to understand a tragedy that occurred in his own life -- apparently his wife became suddenly silent. Does the novel's construct reflect something about your life?
Writing this novel was a necessity for me, beyond any creative endeavor. I went through a difficult period. I was trying to reconcile the world I knew with the one I found myself in.

So you were addressing some personal issue in this novel?
Yes. My wife had become ill at that time.

As a novelist and poet, can you describe the differences between writing a novel and poetry?
Poetry has been a crucial human birthright for thousands of years. But it's been separated from the masses. Many people don't read poetry. A poem is a constricted or circumscribed effort where you're in the sad position of not writing for everyone. I think it's important to try to reach as many people as you can. But there's a feeling, especially among students and young people in our education system that poetry isn't really for them.

I believe there shouldn't really be a difference between poetry and fiction -- that it's all the same thing. Just as I would say there isn't much difference between fiction and non-fiction. But writing fiction is a way to attract more people. People have difficulty appreciating poetry because they have very little context for it. It leaves them cold because they see it as a puzzle to be solved. They don't know how to handle it, so they pass on it. But if you give a poem some context and enable people to find pleasure in it, poetry can be very successful. You could say there's lots of contextualized poetry in my books.

How about in the execution of writing a poem or novel? Is there a substantial difference for you?
I wouldn't say so. When I write, I try to speak as clearly as possible, and without pretense. I just say something without concern about how it might be viewed. For me, there's very little difference.

The prose in Silence Once Begun is sparse and lucid. Does that characterize all your fiction?
There are different schools of thought about writing novelistic prose and being seen as an intellectual force. Many people try to complicate their work by making it difficult, so as to look formidable.

Impenetrable prose, right?
(Laughter) Yes. Imagine 10,000 years ago, people sitting around a fire. One person is telling a story. The storyteller's task is to tell a story that mesmerizes lucidly and clearly. I certainly feel that burden.

You teach a course on lucid dreaming and lying. Is there lying going on -- purposeful mistruths -- in Silence Once Begun?
There's a myth about "fact" being objectively valid. When something transgresses that, we call it a lie. I think we fear being manipulated. All I can say is, it's best to act in ways that aren't harmful -- which may involve lying. In fact, we lie all the time. Lies and truth-telling are just ways of interacting with the world rather than being morally judged acts.

Do you read other authors while you're writing a novel?
When writing, I may have books with me that I adore; I try to interpenetrate the material with a particular aura. While writing Samedi the Deafness, I read and re-read The Secret Agent by Conrad. I wanted to obtain some measure of the atmosphere.

As T.S. Eliot said, "Mediocre writers borrow, great ones steal."
(Laughter) I hope I stole something from Conrad.

Who are the writers you adore?
I love Plutarch, Herodotus, Emily Dickenson, Walt Whitman, Rilke, Proust and Thomas Bernhard.

The first two you mentioned are historians. You must value history greatly.
(Laughter) And they're also liars. All history lies.

It's the winners' narrative of events, true?
Yes, it is.

When did you first decide to become a writer and poet?
I was a very difficult child. I had a lot of energy. Now they call it ADHD. They were very quick to put me into special education. I would perseverate on drawings, one after another.

You still draw. I've seen your website.
(Laughter) When I was five, I actually wrote a letter to the Queen of England with all these monsters I drew on it. She had her handmaid write back and said she liked the letter very much. I still have it. I think I became a writer because it's the only thing I could do. (More laughter). Really, writing is only a re-synthesis of information. The writer is just attempting to come to terms with the world.

One could say that about all art.
Certainly.

What's next for you?
I wrote another book which will come out next year. I've been thinking about getting a dog. I'm learning to play Go. It's a very complicated game -- more so than chess. I also have an ambition to read every book I own. (More laughter).