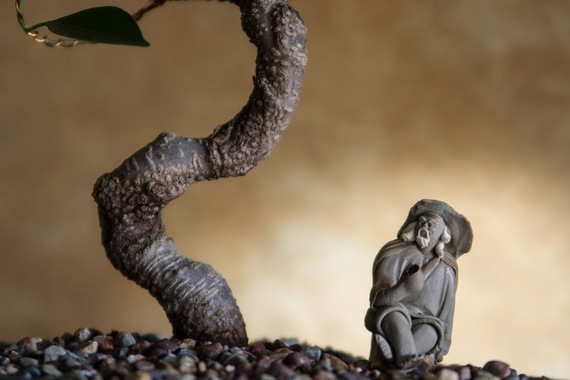 During a time of great drought, a Taoist master was asked by members of a village if he could help bring rain to their dry fields. They confessed trying many other approaches before reaching out to him, but with no success.

The master agreed to come and asked for a small hut with a garden that he could tend. For three days, he tended the garden, performing no special rituals or asking anything further from the villagers. On the fourth day, rain began to fall on the parched earth. When asked how he had achieved such a miracle, the master answered that he was not responsible for the rain. However, he explained, when he came to the village, he had sensed disharmony within himself. Each day, as he tended the garden, he returned a little more to himself. When he returned to balance, the rain came naturally.

I have heard that this was one of psychologist Carl Jung's favorite stories, told to him by Richard Wilhelm, translator of the Chinese divination text, I Ching: Book of Changes. Jung believed Taoist beliefs mirrored his own understanding that what we call personal consciousness is only a partial perception of a greater whole. There are ways to fling open the mind, connecting us with a collective unconscious, allowing us access to larger universal rhythms. And from this fruitful entanglement, parallel events can arise, such as what happened between the Taoist master and the rain falling.

Jung would later call these seeming coincidences synchronicity, a psychological principle that treats the inner attitude of the person as inseparable from events taking place in the world. Jung, however, was not suggesting or equating synchronicity with causality. The Taoist master did not cause the rain to fall. Rather, Jung believed there were parallel processes in which outer events mirrored psychic activity. He was struck by Wilhelm's insight that tao, normally translated as the way or path, might be better understood as meaning. Synchronicity could be understood as coincidences threaded together by meaning, a way of knowing that was potentially as impactful as Western concepts of causality.

We all have some intuition of a thin veil separating us from a larger universal consciousness. Jung was not alone in believing this veil could be lifted. Philosopher and novelist Colin Wilson wrote of a "subconscious mind" that becomes numb, "like an arm upon which I have been lying in my sleep, and which has become completely dead and feelingless." The task is to restore circulation between the subconscious mind and the flow of life. In doing so, we awaken a feeling connection with awe and mystery. And in awakening to this possibility, a fundamental transformation takes place. No longer passive subjects at the mercy of events, we become active participants translating meaning into life.

Does the parable of the Taoist master represent a symbol of the awakened mind, a person who has restored circulation between himself and the Universe? And if this is the case, then we must consider anew the synchronistic attitude toward life. When we restore balance and meaning in ourselves, we seed the world around us with hope and purpose.

More:
GPS For The SoulTaoismcarl jung
Newsletter Sign Up
An essential daily guide to achieving the good life
Subscribe to our lifestyle email.
Successfully Subscribed!
Realness delivered to your inbox