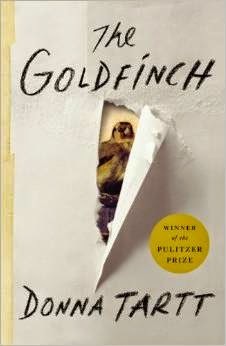 Donna Tartt's The Goldfinch has its admirers and detractors. But what can we say about the sensibility of an author who writes a novel based on a sui generis work by a l7th century painter, Carel Fabritius, at the same time naming its central character after the brother of a famous post-Impressionist painter? Theo Van Gogh was an art dealer and Tartt's hero, Theo Decker, the possessor of a stolen masterpiece, finds himself dealing in art. Answer: she has a feeling for connection and place that creates a mythic New York City neighborhood somewhere between Upper East Side aristocracy and West Village bohemia that readers from nowhere in particular may easily call their own. Chekhov created a similar feeling of familiarity by producing empathy with characters who audiences felt spoke their hearts. Tartt achieves a comparable end with blocks and streets, an imaginative universe which readers possess and ultimately relate to as a map of their own lives. Tartt partakes of the kind of psychogeography that the German writer W.G. Sebald applied in the landscapes he toured in novels like The Rings of Saturn, The Times recently reported on a more scientific iteration of the same impulse, a "date mining project" at Stanford called "Mapping Emotions in Victorian London" which "is part of a growing movement in the humanities to harness digital technology for cultural analysis ("Stanford Literary Lab Maps 'Emotions in Victorian London.'" NYT, 4/13/15). But here is Theo returning to New York,

"The streets were much louder than I remember--smellier, too. Standing on the corner by A La Vieille Russie I found myself overpowered with the familiar old Midtown stench: carriage horses, bus exhaust, perfume, and urine. For so long I'd thought of Vegas as something temporary--my real life was New York-- but was it? Not any more, I thought, dismally, surveying the thinned-out trickle of pedestrians hurrying past Bergdorf's."(P.365)

Tartt could have described classic landmarks like Central Park and even the Plaza, but A La Vielle Russie is full of connotations all its own. Theo is exiled from his childhood like the émigré Russian aristocrats who buy and sell Faberge eggs at a boutique which call to mind an idyllic pre-revolutionary past. Theo purchases "fresh produce from the farmer's market at Union Square, wild mushrooms and winesap apples" (p. 394) And the now defunct Jefferson market is also a pit stop. (p. 396) When he and Hobie, his boss and eventual partner in the antique business attend "showings at Christie's and Sotheby's," (p.399), they go to Sant Ambroeus (locations in the West Village, Madison Avenue, Soho and Southampton) for espresso and chocolate croissants. If you connect the dots you begin to realize that Tartt is weaving, a pattern, a kind of music predicated on geography. The White Horse tavern on Hudson (p. 425), where Dylan Thomas, quaffed down drinks, the Paris Theatre (p. 458), a pocket of art house sensibility in the shadow of the Plaza, Match 65 on 65th Street, Le Bilboquet on 60th (p.508), "the King Cole room, and the Oyster Bar at Grand Central," (p. 510),"deserted Tribeca evenings" (p.510), "the Subway Inn, straight across from the loading dock at Bloomingdale's, a time warp straight out of Lost Weekend...the Twilight Zone glow if the jukebox and the Buck Hunter arcade game blinking away in the depths," (pp. 523-524), Brother J's "on 110th, a workman's dive with Bill Withers on the jukebox and a sticky floor, career alcoholics slumped over their third bourbon at two p.m." (p.489) and Kate's Paperie (p. 525).Tartt exudes the High Low sensibility canonized in the famous MoMA show organized by Kurt Varnedoe and Adam Gopnik back in l990. What novel about geographical intersection between aristocracy and bohemia would be complete without a mention of Manhattan's last revival house. Though, The Bleecker Street Cinema, The New Yorker, The Thalia are all gone, the venerable Film Forum remains (p. 606). Where else would a Glenn Gould documentary be playing? What better place to rendezvous with the girl our hero has always loved and will never have? But yes despite the novel's disconcerting comic strip plot and personalities, Tartt sometimes even gets character right. Here is Theo on the rival for his beloved Pippa's affections,

"How the hell could she be living with this goofball Everett? With his bad clothes and his rabbit teeth and his always startled eyes? Who looked as if his idea of a hot time was brown rice and seaweed from the counter at the back of the health food store?"(p.606)

Are you an insider who gets it or has the author made you one, through her art? That's the question. Does the person who understands all this about Everett follow the same journey that Tartt maps out, the way Joyce lovers follow Leopold Bloom's journey through Dublin in Ulysses?