A friend emailed me asking my opinion on a paper that quantifies the effect of plastic bag bans on emergency room visits for infectious intestinal diseases. I'll let the author's figures tell the story here.

Figure 1 shows the quarterly number of ER visits in San Francisco County (the site of a plastic bag ban) with 95 percent confidence intervals around the mean estimate. The break in the figure shows when the bag ban was introduced. 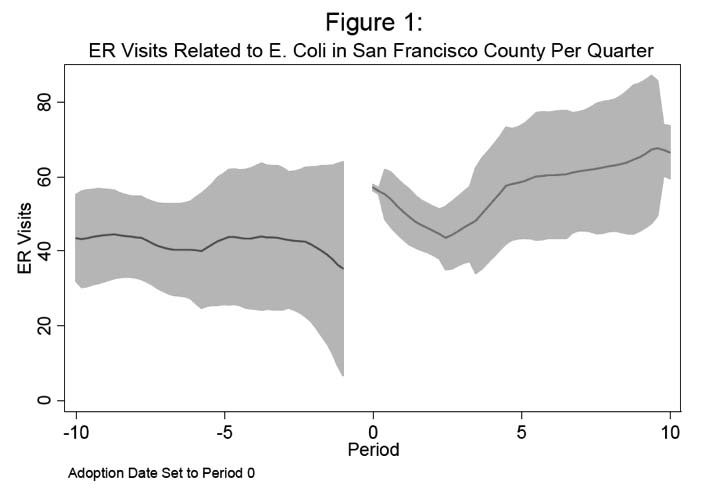 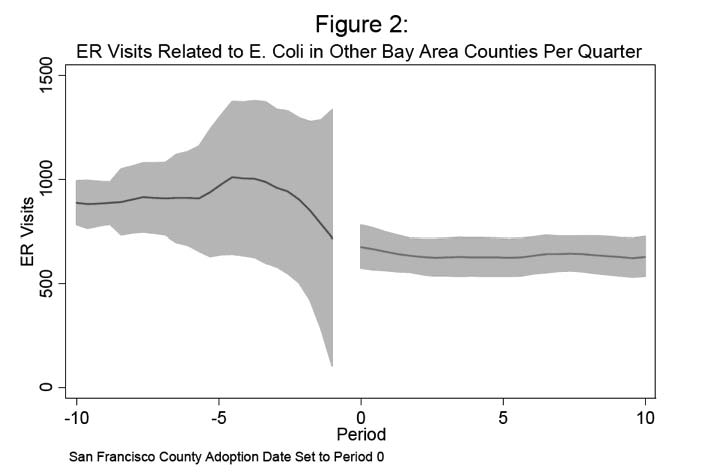 What might account for this effect of the apparently increasing number of ER visits in San Francisco County as a function of a plastic bag ban? Well, the authors cite another study that shows that E. coli -- a bacteria that can cause diarrhea and vomiting and sometimes death -- was found in 8 percent of reusable bags examined and this might be explained by the twin facts of people not using separate bags for meats and vegetables and that bags were rarely (or never) washed between uses.

But wait, there's more! The authors go on to estimate that the bag ban is responsible for an extra 5.5 deaths in the San Francisco County that result from foodborne illnesses. Scale this up to the nation, and there could (and I emphasize could) be a substantial number of extra deaths that one might (and I emphasize might) attribute to plastic bag bans.

OK, so you can imagine what the conservative bloggers are saying about this (indeed, the friend who pointed this paper out to me is a conservative blogger!). My immediate response was that this looked potentially important and needs to be replicated elsewhere.

However, I was somewhat shocked when my less conservative friends started firing off unscientific responses about those who oppose bag bans. These included: the people that wrote the report were not scientists (true, they appear to be lawyers and economists -- so what? Their data should be evaluated on the basis of it, not on the author's academic qualifications); the report was not published in a peer-reviewed journal (true, it was a research paper from the Institute for Law and Economics at the University of Pennsylvania -- ultimately, such studies should be published in peer-reviewed journals because genuine peer-review provides the critical vetting that is essential to have faith in a study); and, the plastics industry supports all those that oppose bag bans (I can't tell if the plastics industry supported these folks, but it is true that the plastics industry has a long history of opposing plastic bag bans). My friends didn't address the data, and it took a lot of prodding to get them to view this as a teachable moment. And oh what a teachable moment this is.

A slight increased risk of infection from using reusable bags should be a public health wakeup call. People should be told to wash those bags and don't mix meat products with other things that are unwashed! We should all be careful and aware of the possibility of contamination in our food supply chain and here is one example where we have some control over it.

We have control over a lot of mortality-inducing things yet chose not to do much about them. Cigarettes and alcohol are legal despite the known deaths caused by them. But things that we can address with easy education should be addressed, and we have many public health success stories of such educational efforts.

But I think there are other teachable moments here. I think it's important to think back to the rational for having bag bans in the first place. These include, but are not limited to: plastic bags can clog storm drains and cause flooding, and have to be removed prior to water treatment lest they clog up the waste water cleaning system. Plastic bags clog landfills, taking many hundreds of years to break down. Plastic bags can be eaten by terrestrial animals, which can choke them to death. Plastic bags that get into water bodies (including rivers and oceans) can be eaten by aquatic animals, marine mammals, and seabirds.

Thus, plastic bags, when used at the scale that we use them in the United States, have many unintended consequences that can't be easily mitigated against. These unintended consequences have easy to quantify costs (the costs of straining them out of water treatment plants), as well as those that are more difficult to quantify (the costs of a dead bird or a dead fish). The photographs of the Great Pacific Garbage Patch should make us all sick.

Plastic pollution is largely preventable. Use less by trying not to use disposable, single-use plastic utensils, bottles, and containers. Eliminate or reduce the use of plastics in packing materials. Bring your own reusable bags (but be sure to clean them periodically). And, support plastic bag bans or taxes to reduce or eliminate plastic bags. Our landfills, our wildlife, and we will benefit.