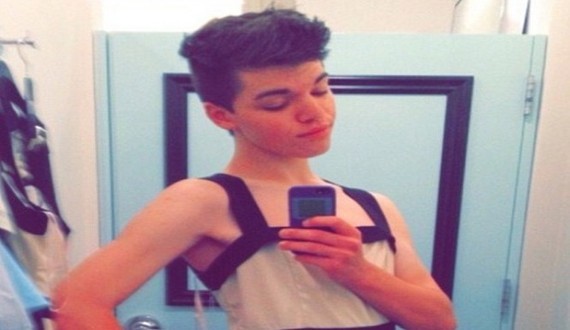 She got out of the warmth of her bed and began walking 4.5 miles to her death. She killed herself just a short distance from my house on Interstate 71, a road I drive often. The17-year-old Leelah Alcorn took her last step, in front of a fast moving tractor-trailer, in hopes of ending her life.

Since that devastating night on December 28, the young, transgender Alcorn has become a household name around the country. The Cincinnati teenager, whose conservative parents did not accept her identifying as transgender, has prompted large gatherings of people from both the straight and GLBT communities.

This past Saturday, January 10 at the Woodward Theater in Cincinnati, I joined hundreds of others in paying our respects to Leelah. While incredibly sad, the tenor inside the theater was not one of overt grief as I had expected. Instead, the sadness and anger created by Leelah's death produced an atmosphere of pure willpower to generate more attention for the trans community.

On screens around the auditorium, I watched photos of Leelah on display with the hashtag #FixSociety. As various members of the GLBT community spoke, it was moving to see the wide range of people in attendance: everyday business people, young children, senior citizens, teens, and Cincinnati's only openly gay member of city council.

Before the music and before the speeches, there was an admonishment from the moderator that this was not going to be a night of bashing Leelah's conservative Christian parents for their neglect of Leelah. But the animosity throughout the night could be felt, bubbling beneath as Leelah's Internet-posted suicide note made clear that her parents did not accept her for her true self.

Leelah has become synonymous with the devastating loneliness a trans teen can endure. Members of the trans community took to the stage in determination to warn that Leelah's death by suicide is far from unique. But emphasis was made that for those who endure, it does get better. Individuals from the transgender community as young as 11 years old stood before the crowd "to be recognized for the first time by the city of Cincinnati."

"I am a real, live transgender" began each teen's introduction. I was puzzled by their phrasing -- "real, live." Of course they are, I thought. But then Leelah's face appeared once more on the screens and I realized how easily I had taken them for granted. How very quickly and so very often these transgender people I was joined with were invisible in far more ways than one. A total of 35 transgender individuals, including adults and a self-proclaimed "tranny granny," introduced themselves to the audience, to thunderous applause.

Among the crowd was the mother of Tiffany Edwards, a transgender girl who was murdered this past June in Cincinnati, because of her gender identity. Ms. Edwards spoke eloquently of her daughter's immense bravery as she lived her life on her own terms.

I became acutely aware of the absence of Leelah's parents. In a crowd of hundreds of strangers, not one family member or friend of Leelah stood forward. Regardless, they were spoken of often. Bitterness and resentment lurked beneath the public expressions of condolences and sentiments offered to the grieving parents.

Even in Leelah's hometown Cincinnati Enquirer, letters to the editor have poured in these past two weeks to ridicule the paper for referring to the teen as Leelah, instead of Joshua, her birth name.

For me, I don't know how I am going to drive on that same highway and not think of Leelah's last moments and the dread she must have felt. I had grown up in a home with such unconditional love and acceptance; she executed herself while feeling none. It's agonizing for me to think about Leelah. Barely old enough to drive and believing that living in this world wasn't worth another 24 hours.

It was beyond moving to stand among that crowd, where love and acceptance was so immense and intense. Just as Leelah's note asked that her death really mean something, I say to her now that your death does mean something. And will hopefully bring about change in society. But to you Leelah, I also say that your life did -- and will continue to -- mean something as well.