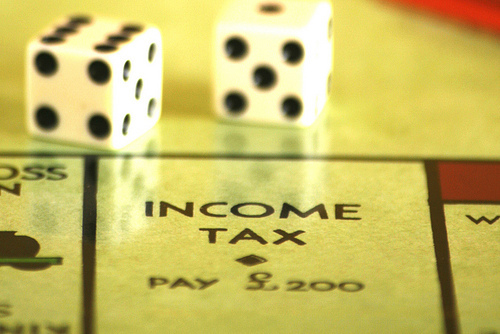 You'd think that common sense and strong opposition would be enough to kill a bad policy.

Not in Washington, D.C., apparently.

A little more than a year ago, I highlighted the absurdity of using a corporate tax holiday to fund infrastructure. Here's a quick refresher: Currently, large wealthy corporations avoid taxes by making it look as though their U.S. profits are generated offshore -- costing Americans $90 billion each year in tax revenue.

Yet, a strangely popular proposal would give companies a temporary tax holiday, letting corporations bring back their money on paper, or "repatriate" it at an extremely low tax rate, thereby encouraging more corporate tax dodging in the future. The most ridiculous part? Some members of Congress want to use this tax break that costs money to "pay for" badly needed infrastructure investments. How does that even make sense?

Recently, Sens. Barbara Boxer (D-CA) and Rand Paul (R-KY) jumped on the corporate tax holiday bandwagon. Their proposal would offer companies a one-time tax rate of 6.5 percent on profits they've booked offshore for tax purposes, compared to our statutory 35 percent tax rate. That would provide a powerful incentive for companies to continue avoiding their taxes by booking profits to sham subsidiaries in a tax haven that are often nothing more than a P.O. box.

We've conditioned these multinational corporations to expect another "tax holiday" down the road - and why shouldn't they? A similar tax holiday was enacted back in 2004, followed by executive pay increases and over 20,000 jobs shed. Now we're just rewarding the most aggressive corporate tax dodgers for their patience, to the detriment of the American taxpayers.

These proposals have faced outcry from a number of tax fairness and civil society groups, but we aren't the only voices on the table. The president notably called out corporate tax avoidance in his annual State of the Union, and top Republicans such as Sen. Inhofe and Sen. Hatch have deemed using a tax holiday to fund infrastructure a "bad policy." Hatch explicitly said, "Saying you're going to use something that loses money to pay for anything is just wrong."

President Obama's recently released budget calls for a 14 percent mandatory tax on all profits companies have booked offshore for tax purposes (known as a "deemed repatriation", in contrast to a voluntary "repatriation tax holiday"). While it is a huge improvement over a temporary tax holiday because it forces companies to pay U.S. taxes they owe on U.S. profits they've booked offshore, it still rewards large multinationals with armies of tax lawyers. It thereby gives them a massive discount at the expense of responsible small business owners and ordinary taxpayers. A company's success should be based on the quality of their products or services, not on how many tax accountants they can hire or how well they can game the system.

Our country badly needs investments in infrastructure - one in nine bridges are considered "structurally deficient," and access to public transit must keep up with changing travel trends as Americans drive less. But a corporate tax holiday that would cost taxpayers money down the road is not the way to do it.

Instead of using a tax break gimmick to pay for infrastructure, Congress should close the loopholes. Fortunately, there is a strong proposal on the table to do that: The Stop Tax Haven Abuse Act (S. 174, H.R. 297), recently introduced by Sen. Sheldon Whitehouse (D-RI) and Rep. Lloyd Doggett (D-TX). This bill would close the most egregious corporate tax loopholes and curb corporate inversions, a tactic companies have used to further lower their tax bill.

Let's let common sense lead the national debate on tax reform. It's time for us to recognize that letting corporations game our tax code forces the rest of us to foot the bill. Let's implement the solutions that work.

U.S. PIRG, the federation of state Public Interest Research Groups, is a consumer group that stands up to powerful interests whenever they threaten our health and safety, our financial security, or our right to fully participate in our democratic society.