"Alright, alright, alright," as one famous and easy-on-the-eyes Texan drawled in the classic film Dazed and Confused. In fact, those were the first words the actor Matthew McConaughey said on screen. Visiting Austin, that phrase resounded often as I visited some of its iconic marvels. I am finally in the city I've longed to visit. Bring it on!

Austin is a creative, constantly evolving city. Everything you've heard about it is true. With vibrant entertainment and culture, inspiring cuisine and stunning outdoor settings, Austin lets you create a soundtrack all your own. After all, with more than 250 music venues, it is the Live Music Capital of the World. Another reason to like Austin: this town is sunny -- very sunny -- like 300 days of sun and blue skies smiling at you a year-sunny. (I smiled a lot while in Austin).

Gettin' Stronger (and Larger) Every Day

Austin takes the top spot on Forbes' annual list of America's fastest growing cities for the fourth year in a row.

We've had 307 companies move here in the last 9 years,

says Dave Porter, Senior Vice President for Economic Development. And, not to be overlooked, the University of Texas churns out engineers and computer scientists into this five-county area at a record pace. Austin now boasts some 4,000 technology companies. Clearly, it's hard for other cities to compete.

My first evening in Austin -- play me some music! And the word on the street seemed to be
The Elephant, one of the famous music venues in town. If cool jazz is your melody of choice, this is the place -- and it happens every night of the week. By the time I arrived the joint was jumpin', the ambiance slammin', and the setting was intimate, not to say slightly claustrophobic. A group called The Monster Band was doing its thing -- loudly -- horns blasting with five hundred pounds of furious, fully-blown big band horsepower making for a total wall of sound.

That would be the state capitol, a magnificent example of 19th century architecture and widely recognized as one of the nation's most distinct state capitols. Placed on the National Register of Historic Places in 1970, it was later designated a National Historic Landmark for its significant contribution to American history. The day I visited it was very warm but as the capitol is sited on one of Austin's highest points, I enjoyed a refreshing breeze from a veranda as I gazed over sweeping views of the Colorado River. This regal, sunset-red granite edifice is the largest of all state capitols and second only in total size to the National Capitol in Washington. See... everything really is bigger in Texas!\ 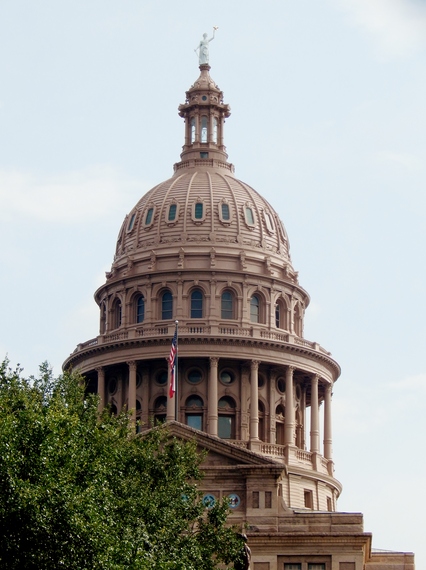 Waiting in line to enter Franklin Barbecue? Of course, though even the wait lines in Texas are - you guessed it - bigger! Aaron and wife Stacy opened Franklin Barbecue in late 2009 in an East Austin parking lot. Word quickly got around that the Franklins were selling the best barbecue in town and soon the line of admirers snaked around the block -- every single day.

In less than two years, The Washington Post, Texas Monthly, and the Cooking Channel were among a growing chorus hailing Franklin among America's BBQ elite. Before visiting, I was told of one recent visitor to this local smokey meat mecca that jumped the line. He visited Franklin Barbecue and had the temerity to go to the front of the long line of customers waiting patiently to get in. Yes, that would be President Obama. Ending his speech at the LBJ Presidential Library, he said: "I love Austin, I love barbecue, and I will get some right after this." Then, arriving at Franklin he said, "I know this is a long line. I feel real bad, but--I'm gonna cut." And so he did, but not before paying for the orders of two people that he cut in front of. Awwwww....

Another president that would have had no problem cutting the BBQ line was LBJ himself, right? Visiting the LBJ Presidential Library was a rewarding experience. First off, the library is simply splendid, describing President Johnson's legacy from the perspective of outstanding exhibits featuring his life and times throughout the turbulent 60s, Vietnam and Civil Rights. I found the November 22, 1963 section affecting and the replica of his Oval Office, duplicated in 7/ 8 scale, was imposing. It was a hoot to pick up one of the exhibit phones and hear LBJ's conversations with various personages. When he laid into the late Adam Clayton Powell about something he was supposed to do but didn't, surprise, the pompous, arrogant politician was left speechless. The conversation ended with Powell backing down and eating crow. Another conversation was with the late Katherine Graham, owner of the Washington Post. Known to be a notorious but innocent flirt, the President began the conversation with honeyed endearments, saying how much he misses her and if only he weren't married...hilarious and somehow very sweet. Viewing his archives of historical papers, photos, film and recordings, I left feeling informed and enlightened and with great admiration for his accomplishments yet ultimately saddened for the man who felt a profound sense of defeat owing to the absurdity and futility of Vietnam.

There's no doubt about it, Austin is one hip city. The slogan "Keep Austin Weird" initially came about by the Austin Independent Business Alliance to promote small businesses in Austin. Today it is the proud motto of the city, reaching far beyond a marketing campaign. The notion that weirdness is the central gist of life here is at the heart of this mantra. Liberal and progressive politically, socially, in the arts and in music, Austin, a city that revels in its eccentricity, intends to keep itself weird - and wonderful. To that end, there's a Keep Austin Weird Festival held each summer. And coming up in October, the annual Austin City Limits Music Festival, this year October 3-5 and October 10-12 with an outstanding lineup: Eminem, Pearl Jam, Outkast, Jimmy Cliff and many more.

In Austin, pride of place and pride in its people is an aura I keenly felt. It gave off a warm and happy -- ok, weird -- vibe that I quite liked. And to quote yet another president, George W. Bush: "Some folks look at me and see a certain swagger, which in Texas is called 'walking'." To that, I can only say Alright!

Deep in the Heart

An easy hop, skip and jump from Austin, this natural beauty -- San Antonio -- is just 75 miles and less than 90 minutes away; it's known as one of the top tourist destinations in the U.S. Historic sites such as the Alamo abound and cultural highlights like the San Antonio River Walk flourish. A city of intriguing contrasts, this is a place where modern attractions are juxtaposed with celebrated monuments of Texas history. On my bucket list for eons, I was delighted that I was finally here. The city's motto is Deep. In the Heart. and -- after just a few days of gliding down the river, swooning over the exhibits at the Museum of Art, dining in this, the cradle of Tex-Mex, and getting to know some of its fine citizens - I got it. Yes, San Antonio is deeply captivating and yes, it stirs emotions that directly touch the heart.

First stop: The Alamo, of course. The most famous historic site in Texas, The Alamo played a critical role in this state's revolution. A former mission, it was occupied and defended by a band of Texans, (including Jim Bowie and the frontiersman Davy Crockett) against an overwhelming Mexican army led by General Santa Anna. In unparalleled bravery, they held out for thirteen days and refused to surrender. Each, ultimately, met his death. The Alamo represents the heroic struggle for independence from Mexico and remains hallowed ground in the pursuit of Texas liberty. In 1835, one of the brave souls who gave his life, Daniel Cloud, soberly proclaimed: "If we succeed, the country is ours. It is immense in extent and fertile in its soil and will amply reward all our toil. If we fail, death in the cause of liberty and humanity is not reason for shuddering..." Walking through the Alamo, the heart is touched.

Lucky me -- to be here just when the San Antonio Museum of Art was presenting a major exhibit of the work of Henri Matisse -- a once-in-a-lifetime chance to explore what is perhaps the world's finest collection, drawn from the renowned Cone endowment at the Baltimore Museum of Art. The exhibit featured more than eighty paintings, sculptures and works on paper spanning six decades of the artist's career. A few years ago, I had the chance to stand in this artist's very studio in Vence, France where some of these works were painted, so this was, for me, a particularly meaningful encounter.

Sauntering down the river I came upon an ornate bridge that I traversed via antiquated stone steps that lead me to La Villita, an historic arts village and then on to the Arneson River Theater. The steps themselves were worth noting as they were inlaid with pretty Spanish tiles. Here is where Fiesta Noche del Rio, an interactive folkloric show of talented musicians, dancers and singers is presented. The audience sits on grass-covered steps in an outdoor setting; the theater put me in mind of the great amphitheater of Ephesus -- on a considerably smaller scale, of course. For me, the star of the production was one Alejandro Antonio, Flamenco guitarist extraordinaire. His powerful and commanding strumming seemed to reach up to a sky studded with stars, moving me deeply and touching my heart -- the San Antonio motto relevant once again.

The One, The Only

Every great city has its noteworthy river. I mean, what would Paris be without the Seine or London without the Thames? However, there's one city-defining body of water that takes the prize. Yes, that's San Antonio and its famed River Walk. 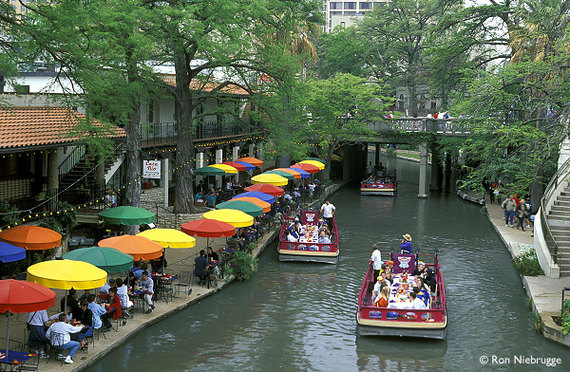 Dating from the 1940s, River Walk's trail of cobblestone paths lined with sheltering trees, shops, gardens and restaurants meanders through the city and connects more than 2,000 acres of parkland. In fact, it is a living example of what a reclaimed city river can be. Teddy Roosevelt camped on its banks as he recruited his Rough Riders and the battle of the Alamo happened here. Julian Castro, past mayor of the city, has called the San Antonio River "the lifeblood of this community." No argument there. San Antonio's charms go deep, to the heart - and that's just where my brilliant memories will stay.

If You Go - San Antonio:
www.visitsanantonio.com

If You Go - Austin:
www.austintexas.org