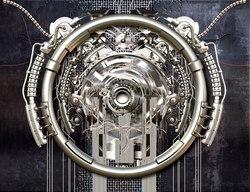 We tend to think of 1909 in sepia tones. Buggy whips were still hot sellers, as were those bicycles with the absurdly huge front wheel. But with all the changes from that day to this, three things remain the same:

Consider this lesson from over a century ago.

Vashti (no last name given) lived alone. Her relationships were conducted through video conferences, text messages, and podcasts, made possible by and through the all-encompassing apparatus known simply as "The Machine." Vashti lived, if you could call it that, in a world dominated by barriers and enabled by the artificial means to overcome them.

She lived that way until the artificial means she used throughout her life to overcome those barriers weren't enough. In other words, there came a day when there was, for Vashti, no alternative to personal interaction. It was at that moment, we are told, that Vashti was "seized with the terrors of direct experience."

Vashti's world was created by E.M. Forster in The Machine Stops, published in 1909. Over one hundred years later, the business landscape is littered with those who rely almost exclusively on machines for their interactions. While they may not necessarily be seized with the terrors of direct experience, these people act as if they are.

I am virtually certain that buried deep within the 900 plus pages of the Dodd-Frank Wall Street Reform and Consumer Protection Act or maybe it's in the 1,400 plus page Affordable Care Act, is the requirement that every business have a Facebook page, generate Twitter followers, start a blog, and publish an e-newsletter. Every marketer worth his or her salt has a free whitepaper (a $500 value!) breathlessly relating the seven or so critical steps to social media success.

And no wonder. If business has one holy grail, it is the capability of building real relationships efficiently and virtually without effort. Think I'm wrong? Consider how many times you've called someone and been disappointed when they pick up the phone. You were hoping to leave a message, thereby hitting the ball back over the net in a fraction of the time it would take you to make the requisite small talk. Only they picked up, and you had to talk.

When text messaging came along, we didn't even have to bother with pleasantries conveyed in a voice mail message. Not only was there no chance of them picking up, but the odds were that they'd just hit "reply" instead of calling back and you'd never have to speak to them at all. Amazing! Just think of how many people we could reach if we never had to actually touch them!

There is no doubt that effective communication is only partially determined by word choice. True meaning is often conveyed by far more subtle cues such as voice quality, body language, tone, and facial expression. Social media offers none of those. (And don't give me Skype and Face Time. At least half of the mental energy of anyone engaging on Skype or Face Time is consumed by the recurring thought: is my nose really that big?

The problems with social media end electronic communication are these:

First, relationships are not established 140 characters at a time. Acquaintances are. To be sure, social media, voicemail, e-mail, and texting are about engagement and can provide the possibility of relationship, but the real thing is hard to create that far removed. Instead, for most, social media, texting, and online communication represents only a façade or, at best, the potential for connection. Counting likes, fans, and followers is neither a real marketing endeavor nor a true metric of success.

Second, the posting of vapid questions like "what are your top resolutions for 2015?" is worse than lazy - it's filler masquerading as engagement. A profile filled with those types of questions means only that someone felt he had to check the box when it came to engaging in social.

One industry in which the limits of virtual communication are cast in high relief is online dating. With a claimed 250,000 matches per year, there can be no doubt that Match.com is all about creating real life connections from online interaction. And do you know what the most successful initiative launched by match.com has been since its inception? In-person events. After millions of dollars spent on building its brand around online interaction, Match.com came to the conclusion that relationships develop as a result of how people feel after being in the same room with one another.

Therein lies the difference between marketing and sales. Marketing, says author Seth Godin (author of 15 national bestsellers on sales and marketing including Purple Cow and Permission Marketing), involved the telling of a story which hopefully goes viral. Sales, on the other hand, is about overcoming each person's natural reluctance to say "yes." Marketing can be done in a blast to hundreds, if not thousands. Sales are either individual or at the very least made to feel individual. Marketing is broadcasting. Sales are direct experience.

At the end of E. M. Forster's story, the machine that enabled and encouraged the aloofness of simulated contact failed. True to the title of the story, at the end, the machine stops. The inhabitants of the machine, each of whom had come to define existence as separate and apart, lay together broken and dying on the ground. As their personal light faded, they found themselves seeing directly and for the first time an unfiltered glimpse of the outside world.

That's where the customers are. And I would submit to you that they are longing for direct experience.