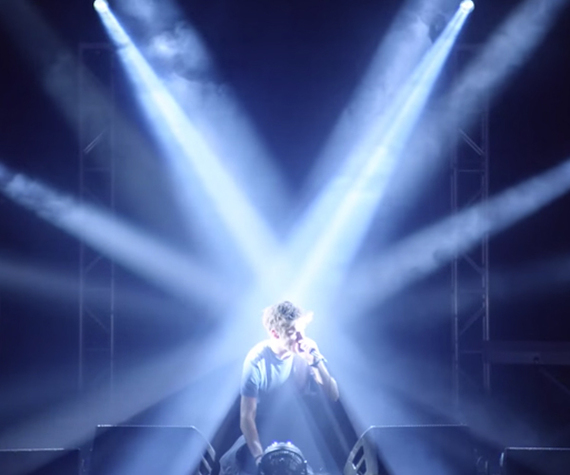 I hope using an address as personal as 'dear' is ok. Because in using this personal address, I want to acknowledge how your words have become so personally meaningful to myself, my peers, and the world of musical, technological, and empathetic comedy. Because at 25, you have mastered it. And I would never want to write a letter as an overly obsessive fan, but more as a spectator admiring your work with the purest respect for articulating the human mind and heart a little bit deeper than some of us. So here we go.

Several days ago, your second Netflix special Make Happy was released, after what 2013 and the direct release of Words, Words, Words in 2010 (before direct online streaming was even a thing...). I had the opportunity to see you live at the Vic in Chicago in March 2015, shortly before you filmed the special in New York the following June. I left with a mixed bag of emotions after leaving this comedy show. Because I wasn't watching comedy. I was watching an idealized human heart burst open with equal parts joy, sadness, confusion, and all the other Inside Out emotions. As quickly as I felt one, it was immediately met by another.

You are right. We are a generation obsessed with happiness. We try as hard as we can to keep our spirits up. Because that's what qualifies as a "good life." I can't even imagine how this image is elevated as a public figure. And if we can't do it alone, we cloud it with a technological image that we are and that we can. Both to convince other people, but more so, ourselves. And for you, I know the weight of being a generational voice obsessed with the idea of having "a voice" is nothing but overbearing, overwhelming, and almost too much to live with. I guess you said it yourself: "I had a privileged life. And I got lucky. And I'm unhappy." And the fact that you've played this role with tons of energy and agility for ten years must be exhausting. So thanks for that.

Your double entendre piece about a messy Chipotle burrito in Make Happy, redundantly so, has these two dimensions of meaning. Yes, it playfully points on our inability to sometimes defend who we think we are and what we want. But digging deeper, it becomes an expression of the pressures to constantly make the right decisions, your constant call to perform in a world of live streams, Snapchats, and audiences, and the constant battle to evaluate if this lifestyle personally makes you whole. Even as a "normal" person, I fight this internal boxing game daily. The daily fight of wondering if we all hold a position of relevance and a following, and if not, how do we get there? Because for some sticky reason, we base our quality of life on our fucking Instagram followers, re-Tweets, and likes. The microscope of how closely people evaluate your judgments and conclusions of your beliefs, thoughts, and stances is weighed down even further in adding this comedy element to it. Once again, you stated it in your interview recently with Splitside: "Eating from the hand that feeds you." Having a constant audience must be thrilling and exhilarating, but also terrifying, anxiety-induced, and I think I would come to your same conclusion:

"I don't think that I can handle this right now."

And that leaves the question of: Would you have signed on for this if you knew exactly what it was you were getting into? I know that's a painfully annoying question, and no one can or should answer that question. But I bring it up because you mention an image of what your life would look like if you didn't have this audience, this call for a response, and this anxiety of wondering if you're providing the product that people want, which all so quickly can (and probably will) cause a huge mental weight. You must equally love and hate your audience because they love you, and sometimes, I feel like I would absolutely hate that. Not being sought after feels so nice sometimes because then people don't expect things from me. But if they never expect things from me or anyone else, what the hell are we all doing here? And pairing this heaviness with specifically timed comedy only adds to your perpetual ingenuity.

You wouldn't have gotten the lettuce if you knew it didn't fit in the burrito. Or the cheese. Or the peppers. If life could warn us of the imminent obstacles coming towards us, things would look so very different for all of us because then we'd so easily avoid it all. But facing these consequences straight up is what makes life, well, life. And if I lived in that pressurized articulation day in, day out, I wouldn't know what world I was even living in. Who knows if you saw all this coming, but as a true artist, you're somehow able to live in both worlds.

So on behalf of this generation you speak to, we thank you for your understanding and ability to connect us in one mind, as well as articulate why this modern performance technology era is so beautifully fucked up.

And one more thing: I know that you hope we're happy. We just hope that you are too. And we hope you and your dog are taking a well-deserved break.

Sincerely,
Me and Everyone Else