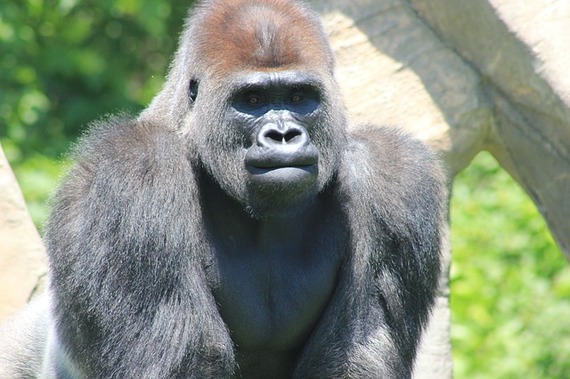 Thank you Harambe for showing us humans, things that we hardly see in our own world.
You showed great Restraint while in a horrific situation. People watched you as if you were a human. But I watched you as the Silverback Gorilla that you are. A gorilla that could rip a human apart in moments, on purpose or on accident. A gorilla that is very protective of his own family that was present at the time. Your job would have been to protect your family from anything that was a threat to their safety. And we all know that humans are a threat to everything we encounter. But at first sight, I see you gently lifting the boy out of the water to stand on his own feet. What restraint with your powerful hands. I see you hold that tiny boy's hand. What restraint when you could have broken it just on an accident. I see you "drag" him through the water. Why? Because you heard his mom calling him, and you wanted her to know that he was ok. But do we realize, oh Dear Harambe, the restraint it took to drag a would-be ragdoll as fast as you did, with the stress that you were feeling, without completely destroying him???
I saw Great restraint, and for that, I say a tearful thank you.

Thank you for the Compassion that you showed to us and to the little boy. Even though it must have been crazy as hell for the little boy to be staring at a 400-pound gorilla in the face, you were so compassionate to him. You never used your voice because it may have scared him. You never opened your mouth because it would have surely made him have a heart attack and die on sight. The most beautiful picture was of you guarding him with your body in the corner. You didn't want him to be wet so you helped him stand. Oh dear Harambe, Thank you for the compassion that you showed to that baby boy and us. You always made us feel like he was safe, well except for when you moved him through the water. But even that was compassion. You knew his mom needed to see he was ok. I still weep at that moment now, because that moment is where your restraint, compassion, and sacrifice all meet as one.

Thank you Harambe, for your great Sacrifice. You sacrificed your life to save that little boy. You could have gone on inside when they called you. And you would still be alive today, (maybe). But instead, you rushed to his aid. Not out of curiosity, but because that's who you are in your family, the protector. But unfortunately, he was not one of your own.
You knew to even be near him was dangerous for you. You surely knew the moment you touched him, and surely the moment you moved him from one place to another, you were Dead. Harambe you gave your life as a ransom for us all, not just that little boy. You could have given us such a horrifying scene by destroying that little boy, that we would not even be able to recover from the image. There would have been No videos.
I'm going to take a little liberty because I'm the writer of this letter. Those 10 minutes reminded me of the Sacrifice of Jesus Christ. He knew in order to save the humans, he would have to give His life. That's what you did. You've been around long enough to know humans are impatient, brutal, and self-centered. You knew they would kill you, no matter what you did. But I must point out one more time, even though you knew you would die, you showed us Restraint, Compassion, and Sacrifice.
For that, I say THANK YOU HARAMBE!
Rest in peace my friend. You will never be forgotten.

One final note, Even though Harambe showed us all these things, we as humans, who are Supposed to have higher thinking than an animal, showed no restraint, compassion, or sacrifice to him.
All I saw from you, is the same brutality I see toward black people. You claim to be afraid of us, (especially our large black males). And you always claim we were "disoriented" or high, right before you shoot us dead in the middle of the street, in front of everyone.....
Rest in Peace Michael Brown jr. Rest in Peace Trayvon Martin. Rest in Peace Tamir Rice. Rest in Peace Eric Garner. And all the others....
Cops: We don't live in the zoo anymore....