I saw photos of you guys today with signs all made-up in protest of Joan Rivers and her recent death which read, "JOAN IN HELL." Like fresh wasabi, it warmed me. Whether you're protesting the death of a soldier, or a gay pride parade, there's always something magical about seeing all of you with your outdated draw-string pants, brightly colored exercise shoes and fanny packs. Maybe it's your beautifully made and creatively colored signs. Maybe it's your smart catch phrases, or your heartfelt determination to get your point across. Either way, I can't help but smile. But today, I felt something else -- pride. 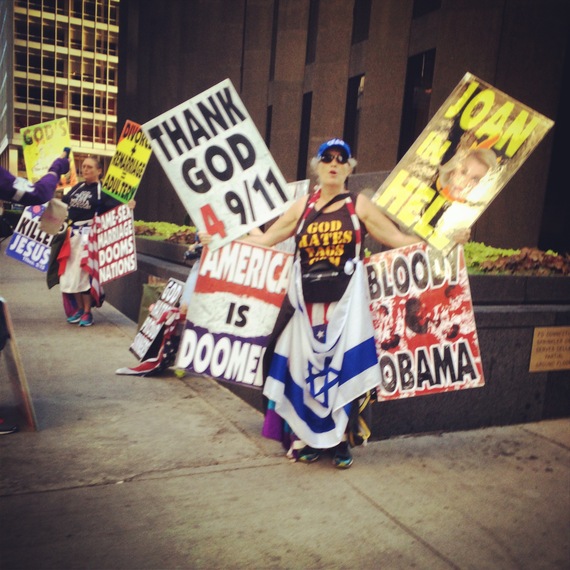 The photo I saw today was just beautiful. I believe it was you, Shirley. You had not one, not two, but four signs -- two on either side of your body, one on top of the other. You had an Israeli flag wrapped around your waist and as I looked at you, I saw it. You looked like a butterfly. A colorful, passionate, hate-filled butterfly. It just took my breath away. But as I looked at your signs, all of which covered some pretty big things (Joan Rivers, 9/11, Obama, America), I noticed something right in the middle -- right in the heart of this angry litttle butterfly. It was the URL for your website. It read, "GODHATESFAGS.COM."

Well, I was blown away. I mean, a website is very important and the name needs to really grab the viewer right away. It needs to bring the viewer in and tell them exactly what they are in for and what is important to you as an institution. Well, as a fag, I was completely touched that of all the things God hates, and there are a lot, he hates fags the most. I didn't know that. I would have thought, for sure, that he hated Comic-Con much more than he hated me. But no. I top the list. I'm not sure what I did to deserve such an honor, but here I am. But do I deserve it?

Joan Rivers, one of the hardest working women in show business, worked her entire life to be hated by you. Joan Rivers supported the gays and the jews. She loved animals, gave money to the theatre, made people laugh -- what's not to hate about this woman? All I did was have sex with other men. I didn't even have a say in the matter! Joan, on the other hand, had to actually choose to be the woman she was. And work for it! I just woke up one day and realized that I liked penises and not vaginas. You think Joan Rivers just woke up one day and realized that she had given vast amounts of money and support to thirteen different charities over the course of her life? No. She even gave to St. Francis Food Pantries and Shelters. Please. You have to actually try to do something like that. No, Joan had to work. Hard.

But still, the website is not called "GODHATESJOANRIVERS.COM," it's called "GODHATESFAGS.COM" and as confused as I am, it still remains an honor. As we go on through this crazy world of ours and as soldiers continue to die and school shootings continue to happen and we keep seeing you and your colorful signs at the funerals, I will continue to smile. The truth is, I envy you. As we look back through the history of the gay rights movement and how each day, we step a little closer towards equality, I will smile because you were there for every step of it. I will smile when I see the photos of you on the steps of the courthouse in San Francisco or standing on the sidelines as we marched on Washington. I will smile when I hear the stories of you at the funeral of Matthew Shepard or the criminal hearings that followed. I envy you because you have been witness to all of these wonderful moments of progress. You've had to stand there, signs in hand, tired vocal chords, aching feet, watching as state after state legalized gay marriage. You've had to watch as gay marriage made it to a federal level -- and won. To see the things you've seen! How lucky you are to have been in the front row for so many wonderful things in this world.

Yes, Westboro Baptist Church, you bring me such joy because all around you, wherever you are, there are people coming together to be better than you -- kinder than you. You are a reminder of how low the world can be when hate is allowed to fuel the soul and that reminder is something I'm so thankful for. You inspire me to be a better person. I smile when I see you because you, and every one of your members, are a living reminder of everything that has progressed regardless of your attempts to stop it. Thank you for yelling. Thank you for making your signs. Thank you for always being there. And most importantly, thank you for hating me the most. Allowing your hatred of me to define you is an honor. May it be with you all your days.

With love and thanks,