I probably shouldn't have said it. I just blurted it out when I realized he wasn't there. 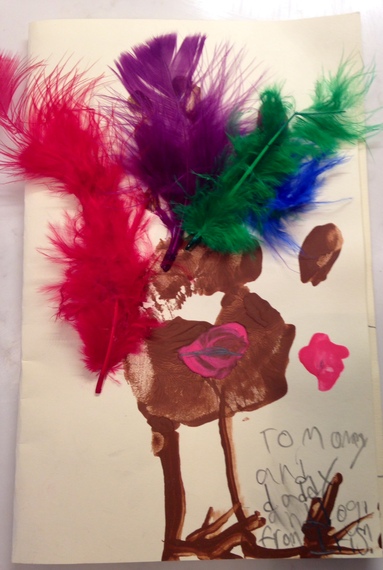 My 8 year old had handed me a Thanksgiving card she made for us at school. It had the feathers glued to the front, and inside was the requisite stick figure representation of our family.

She pointed out her handiwork. "There's daddy, and you and me, and Honor (the dog), and the kitties (we have wild cats outside)."

She looked at me, down at the card, back up at me. Her cheeks flamed pink. I had never seen her blush. She was lovely when she blushed. She bit her lip and her eyes widened. She grabbed the card from my hand and held it closer to her face, scrutinizing it, like maybe she could find him.

I laughed. "You forgot your brother."

"Stop it. Stop it," she said. She grabbed a red crayon from the table and started scribbling. 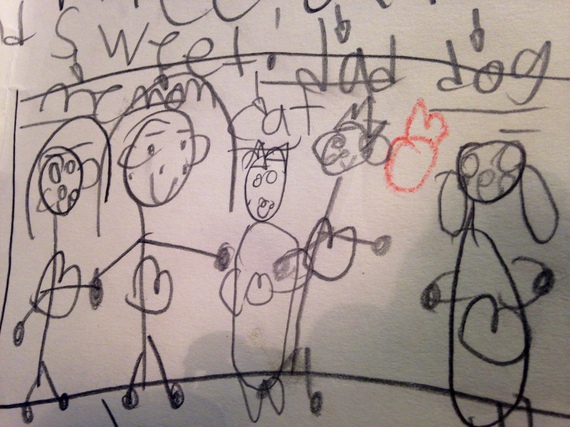 "No, it's not." She was near tears, dropping the crayon and grabbing a pencil, trying to quickly sketch her brother into the tight space next to our dog.

I left her to her repair work and walked from the kitchen, elated.

I'm a fan of guilt/remorse/regret. I have enough to power a small village. For me, it comes with the package deal called working motherhood, but I believe a moderate diet of guilt and remorse and regret is a good thing. When properly heeded, they serve as excellent course correctors in life.

These things were not equally distributed between my two children.

My son would feel badly for inconveniencing me with his birth if he could remember it. When a woman road raged against us, he urged me to consider that she was probably having a "bad day." Wayward bugs that wind up in our house are carefully captured and returned to their outdoor habitat.

In contrast, his sister screams "Kill it kill it kill it!!!!," furious that her brother is giving the offending creature a second shot at life. She has excused herself from the table during dinner to use the bathroom, then three hours later I find a stalk of broccoli floating in the toilet, her loophole for the 'no clean plate, no dessert' rule. When she gets busted and loses dessert for the next night, the look she gives me says, 'It was worth it, lady. Throwing that crappy broccoli away was the smartest thing anyone in this family has done today.'irisskate

They are good kids, but one has too much guilt/remorse/regret and the other doesn't have enough.

I've taught my children things my pre-parent self had no idea I'd need to teach, like how to blow their noses. I was dismayed how long that took. "Blow out," I'd urge, and they would obediently inhale all of the goop back in.

The basics are bottomless -- covering their mouth when they cough, saying "please" and "thank you," not peeing in the backyard when the neighbors are outside and can see you.

Gratitude. Remorse. Humility. Patience. Grace. The master life class list is long and intimidating. I'm no anthropologist, but I would say more is learned than is innate, and sometimes my kids have a woefully inept teacher. Just as I wouldn't get my hair cut by a stylist sporting a 1980's mullet, I might not listen to an adult who tells me to be kind, after she just snapped at us for having fun with the dog, especially when that thing the dog's tail knocked off the table wasn't even broken. I might struggle with gratitude when I hear her on the phone complaining to her friend about all the things going wrong in her life that week. I might have an issue with patience when she tells me I have 3 seconds to get to the dinner table, or else.

Which brings me to my old, familiar friend, Guilt. If only I had done this..I should have done that.

I'm an awful gardener. I kill everything, and yet somehow, I grew two humans. The terrifying part is I'm still growing them and I don't have the fertilizer/lime ratio right yet, and I have no clue about pruning, yet for the most part, they seem to be thriving.

This is where guilt and gratitude play Bad Cop-Good Cop.

My daughter brought the 'fixed' card to me.

Her cheeks were mottled from dried tears and her bottom lip quivered as she spoke. "Don't tell him, okay?" 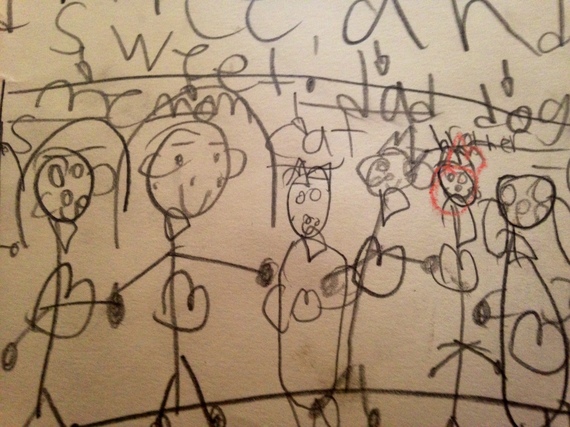 More:
MotherhoodParentsregretThanksgivingguilt
Newsletter Sign Up
Raise the kind of person you'd like to know
Subscribe to our parenting newsletter.
Successfully Subscribed!
Realness delivered to your inbox