It's all right to be angry.

In fact, it's normal to be angry and healthy to admit it.

A young woman called me recently. She was angry over the shootings of Alton Sterling and Philando Castile, but her family told her she was wrong to be angry. It wasn't "Christian," she was told. As a Christian, she should just pray and things would be all right after a while.

Joshua Lazard wrote in 2015 that "the black Christian experience needs to include anger." (http://religiondispatches.org/a-theology-of-anger-forgiveness-for-white-supremacy-derails-action-and-alienates-young-black-activists/) For some reason, too many of us black Christians have lived in a theological fog, a fog created by white theology that guides us and teaches us a desire to "get to heaven." This theology abandons the present and makes black Christians opt for the hereafter; black Christians have been taught for too long that there is relief once one gets to heaven. Therefore, the lesson has been, just "grin and bear it." God knows your pain, and God will take care of you once to "get to heaven." Part of the way to the Promised Land is to forgive one's enemies. Being able to forgive is a mark of personal piety and evidence of one's closeness to God. Many black Christians have bought this theological perspective and for some, it has been helpful.

But this theology is wretched and wrong. It is right to feel anger when one has been wronged, especially if one has been wronged over and over. White supremacy has shown no sign of ever letting up; white Christians who are racist, likewise, have shown no desire of propensity to apologize for their hatred and hate-filled acts. They have shown no regard or respect for the same scriptures to which black Christians adhere, "forgive us our trespasses as we forgive those who trespass against us," or the scripture that says we are to forgive "seventy times seven." Racist white Christians, when it comes to race, have not even shown a desire to turn toward God or to practice agape love. They have, instead, used the Bible to justify their opinions of black people, their ideology and ultimately, their racist acts.

That is why, historically, "good, Christian" white people could participate and engage in lynchings of black people on a Saturday night (metaphorically) and show up for church on Sunday morning, ready to take communion.

It is singularly maddening and frustrating to see black people dehumanized and discriminated against, over and over and in spite of God and the Bible. And the frustration is exacerbated by the belief carried by black people that we are supposed to "forgive" white hatred and just move on.

We cannot do it. It is too much. The cup of forgiveness is running dry because it has been emptied of the possibility to forgive a group of people who have shown no sign of abandoning their hatred and violence based on race. 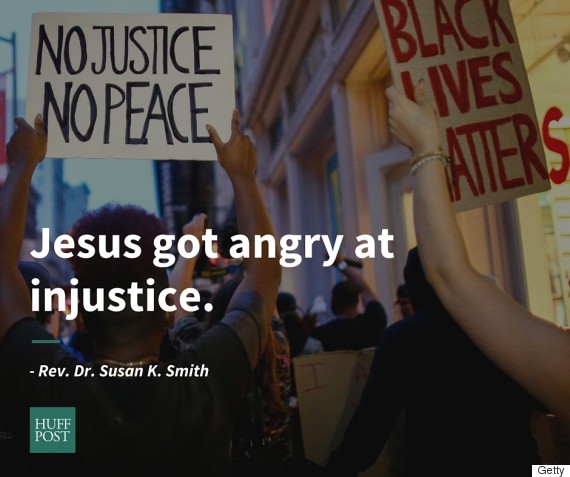 Jesus got angry; he had righteous indignation more than once in the New Testament as he noticed the oppression practiced by those in power in the Roman Empire. He lost his life, ultimately, because he challenged injustice. Many white Christians reject that premise and say that they do not have to worry about being racist because Jesus didn't say anything about it.

Well, we don't know if Jesus said anything about it or not because the Bible was written by many men over thousands of years. We don't know if he might have said something about racism that was just edited out. What we do know, however, is that Jesus got angry at injustice.

The prayer is that we can turn the anger into action which will result, ultimately, in the dismantling of white supremacy. It is time for it to go.