Without hesitation I can say that CalShakes' Production of The Taming of The Shrew (running now through Oct 16th) is a lovely, funny, smartly directed production performed with muscle and wit. Director Shana Cooper dreamed up a Miami Vice version of Padua that was equal parts Hustler Club, Jersey Shore and Malibu Barbie (complete with Alexandra Henrikson 's Bianca as Barbie herself). I don't know exactly why every single thing Danny Sheie said as Gremio made me giggle but it did. It was a seamy treat, and the Thursday night audience I was with just loved it. 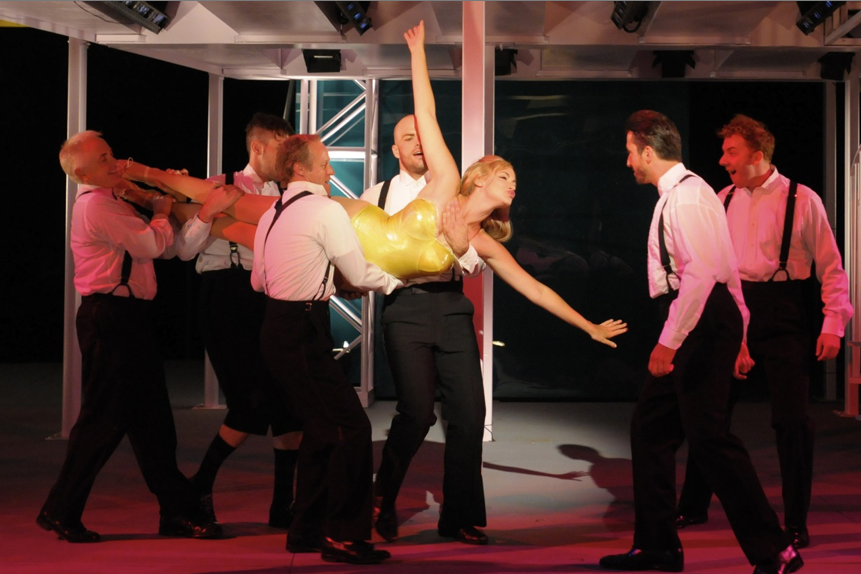 Musical Induction in The Taming of the Shrew

There is the issue of the script.

And no matter how smart the direction, how poised the Kate, how fiery the lust between our violent lovers it's still a play about a mean woman tricked and trapped to the point of submission, whose father barters with her life, and whose new husband starves and abuses her in public. The same meanness and vitriol that we find in Petruchio is cheered, but in Kate it is wretched. In a generous world this is a play about two horrible people that deserve each other -- that is if Kate stayed a righteous bitch and battled with Petruchio till the day he died. Now it's about a prank that sticks. 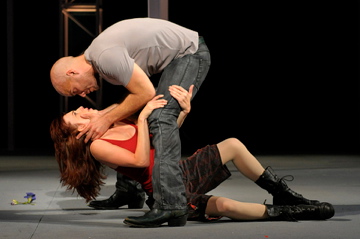 Slate Holmgren as Petruchio and Erica Sullivan as Katherine

I am not the first to take issue with this play. And the publicity for most productions of this play tends to be overly apologetic to counteract -- you know -- society.

But everything you need to know is still right there in the script.

Particularly that final speech of Kate's (you know the one) that ends with "your hand under your husband's boot." Basically, Petruchio makes a bet that Kate would prove more obedient than any other new wife at court. He calls for her. She comes. And Erica Sullivan's puckish Kate perfectly delivers the speech I was positively dreading. This Kate seemed to challenge Petruchio to step up and be a man for her (finally), to be a man that would deserve a wife "bound to serve, love and obey." But after that speech -- which many great and varied actresses have delivered with wit, intelligence, strength, defiance, and humanity -- Petruchio's line still reads:

Yeah. We finally see Kate as a human being, intelligently connecting her own life with the global female experience. She is a Kate we've never seen (and one that Petruchio sure as hell never asked to see) -- not one ready to insult and flail, but one who is a calm, articulate, and queenly. She is -- gasp -- a nice lady. Then...

Which basically means that Petruchio was right. The way to make a mean lady into a nice lady is to trick her, buy her, insult her, embarrass her, starve her, puppet her, and demean her. That's how you take a fiery outcast of a woman and make her perform as you like in Shrew's twisted, loveless world.

If it weren't a tactic in use right now against women in more than one country in the world it would actually be funny.

Of course Shakespeare might have been a secret feminist satirist -- and maybe the whole point of the show is to expose the fact that we laugh at the unfair and unique stress of women, and that we're all idiots when it comes to love and lust, and that Petruchio is thoroughly awful and would never deserve a kind wife, and that a world without mothers (as Padua seems to be) is a backwards place full of out of control men and rash weddings.

And it is a comedy. And it is Shakespeare. And many of you will say "oh lighten up" -- but it seems a luxury to laugh at abuse when there is no chance for the abused to change the game, save themselves, and get out of a world that either wants to own them or wants to change them, but usually both.

As much fun as we have with this play, and as much winking and tongue-in-cheek we can make at the sexual dynamics, we can't change the plot. And the story ends with a psychopathic husband celebrating his wife's changed (broken?) spirit by calling her a wench, grabbing the money he just won betting on her, and taking her to the bedroom. Oh my god, if that's not a frat party nightmare I don't know what is.

Let's do this play. Let's just not kid ourselves about it.

All photos by Kevin Berne