On March 5th, a thousand angry women descended on a facility in Brazil where the biotechnology company, FuturaGene, was growing genetically engineered eucalyptus trees. Later that day, a meeting of the Brazilian Biosafety Commission (CTNBio) was scheduled to announce their decision about whether or not to allow commercial release of the GE eucalyptus. The women, members of the Brazilian Landless Workers Movement, or MST, and several other social movements in Brazil were angry. They broke into the facility and ripped up tree seedlings. They made clear their determination to prevent the release of GE eucalyptus because they have direct experience with the harms resulting from existing large plantations of non-GE eucalyptus, and they know that faster-growing engineered trees will have even greater impacts.

Meanwhile, at Brazilian embassies and consulates at various locations around the world, protesters held signs and banners demanding that Brazil reject GE trees -- beginning with a rejection of FuturaGene's franken eucalyptus. 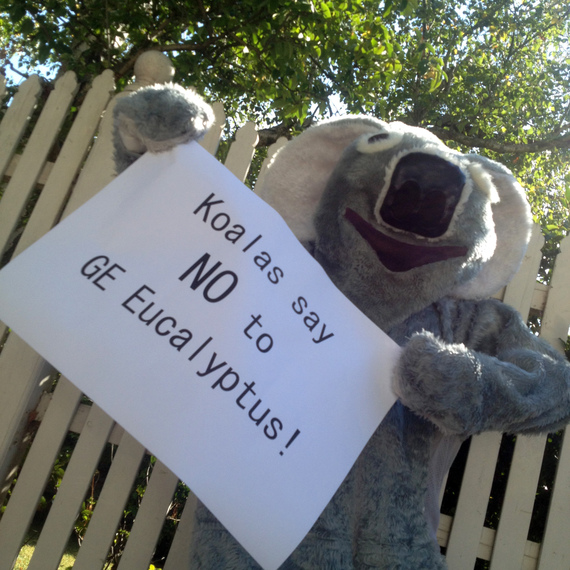 An open letter from Brazilian civil society was delivered, a supporting letter came from international groups. All in all, more than 100,000 protest letters made the resistance and opposition to GE trees loud and clear. But Brazil did not heed. The meeting was postponed by disruption of protests, but rescheduled on April 9th, whereupon CTNBio gave FuturaGene the green light to sell and plant their genetically engineered trees.

This came as no big surprise to Brazil-based Winnie Overbeek, International Coordinator of the World Rainforest Movement, a group that has long worked to protect forests and reject GE trees. He stated that "Over the years, CTNBio has made many decisions in favor of releasing GMO crops in Brazil, ignoring protests, and disregarding Brazil's constitutional mandate for precaution." In fact, the day before the CTNBio decision, a Brazil public agency denounced CTNBio as routinely breaking national law by violating the Brazilian constitutional mandate for precaution.

Here in the USA, our own regulatory agencies have apparently been playing golf with their Brazilian counterparts. In January it was revealed that the USDA had given GE tree company ArborGen the green light to pursue commercialization of their GE loblolly pine simply by refusing to regulate it, which also effectively cuts off any public input into the decision. These two decisions in the US and Brazil represent the first time that commercial release of genetically engineered forest trees was given the okay.*

For Brazil, permitting the release GE eucalyptus is a breach of the 2008 decision made by the Convention on Biological Diversity (which, ironically, is currently led by a Brazilian). That decision requires detailed risk assessment and a precautionary approach to GE trees. Apparently those are mere words on paper? The U.S., no surprise, never bothered to become a signatory to the Convention on Biological Diversity and is therefore bound only by its' own whimsical sense of ethical standards to comply with what is an otherwise widely accepted (if not well implemented) international agreement.

Genetically engineering trees is risky for a variety of reasons: Cross contamination with wild relatives, unanticipated consequences of gene manipulations that may be expressed later in the tree's lifecycle, or under particular circumstances, impacts on wildlife and unknown and unknowable risks which, as our experiences with GE food crops has demonstrated, can be severe. Some of the risks are inherent to the fact that these GE trees are specifically intended to be grown en masse in tree plantations where the land is first cleared of all other life, the soils and waterways drained and drenched with fertilizers and toxic agrichemicals. The wood produced is destined to be converted into pulp or fuels and chemicals that feed an inherently unsustainable resource-gobbling economy. The health and livelihoods of people and creatures living on the land are meanwhile unceremoniously thrown by the wayside and mowed under by the gears of endless corporate profit-making and the mirage of economic "development."

The MST women captured this when they stated: "This model of agribusiness is the model of death, not of life. We the landless women are here to defend life, defend food sovereignty, and defend agrarian land reform."

* GE black poplars had been commercialized in China in 2001, but no records were kept about the location or size of the release and it is considered an embarrassment to the industry.