Part of the hilarious and slightly surreal existence that goes along with being a reality TV personality in the 21st century is the constant wardrobe changes. This Saturday, we started the day taping a 20th anniversary tribute to the Wiggles, an Australian powerhouse children's band, switched it up by emptying our bags for The Purse Forum, and finished the day with about 1,500 gorgeous drag kings and queens in full regalia. How in the world does a girl compete? Answer: The first step is admitting one can't.

The Wiggles' crew arrived at 10 a.m. sharp. Although the kids woke us up at 7:30, they mercifully occupied themselves eating breakfast and playing, and we somehow managed to fall back into the sleep of death. It was dumb luck that I rolled over and looked at the clock, and at 9:35, stumbled out of bed and threw on the first thing I could find -- a low-cut beaded tank top, ¾ length band jacket and skinny jeans, plus flip flops. Even though it's 30 degrees outside, it's late summer in Australia and I wanted to show support, not only with a stuffed Henry the Octopus but also with footwear. On the advice of my husband I did change into a t-shirt; the beaded tank was a bit too disco for the intended audience of the film. My own children are completely used to seeing Mommy in anything from feathers and fishnets to a business suit and barely noticed my outfit, but other children might not be ready for cleavage with their morning juice.

We taped our well-wishes, and no sooner had the documentary crew packed up than the doorbell heralded the arrival of the Purse Forum crew, to document whatever happened to be in my handbag and Simon's man-bag. And if you'd like to know what was, here's mine and his.

Purses emptied, it was time to get ready to raise money for LGBT charities at the 25th Annual Night of a Thousand Gowns, and I had no idea what to wear. What exactly does a straight girl wear to court? Specifically, the Imperial Court of New York, for a grand ball in Times Square to celebrate the crowning of their newest Emporer and Emporess, all to raise funds for the Trevor Project and the Ali Forney Center. It was to be a night of serious drag glam; Simon and I were on the host committee, and I had a lot to live up to.

How do you compete at an event where everyone else is wearing 50 pounds of sparkle, a taffeta gown and often a wig 16 inches high? Where they have won RuPaul's Drag Race, Miss Paradise and who knows what else? And for some, the illusion of gender mightn't be real but the diamonds definitely were. WELL. I called up our friend and fellow committee member, designer Marc Bouwer and asked if I could come shopping. Once at the showroom, we decided quickly that too much flash would look as though I was trying to compete with the ladies, but a solid would be an admission of defeat. We settled somewhere in between, a gown with a black sparkly underlay and netting with purple roses on top, and a plain black velvet clutch. The moral of this fashion story is -- don't even try to compete with the flash, but don't throw up your hands and go basic black either! 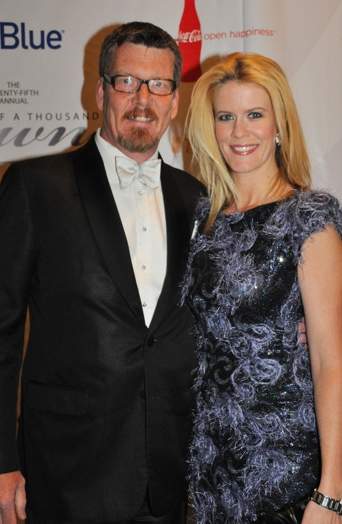