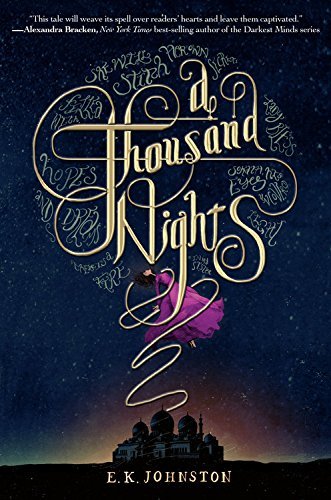 Lo-Melkhiin killed three hundred girls before he came to her village, looking for a wife. When she sees the dust cloud on the horizon she knows he has arrived. She knows he will want the loveliest girl: her sister. She vows she will not let her be next.

And so she is taken in her sister's place, and she believes death will soon follow. But back in their village her sister is mourning. Through her pain, she calls upon the desert winds, conjuring a subtle unseen magic, and something besides death stirs the air in it's place.

Lo-Melkhiin's court is a dangerous palace filled with pretty things: intricate statues with wretched eyes, exquisite threads to weave the most beautiful garments. She sees everything as if for the last time. But the first sun sets and rises, and she is not dead. Night after night Lo-Melkhiin comes to her, and listens to the stories she tells and day after day she is awoken by the sunrise. Exploring the palace, she begins to unlock years of fear that have tormented and silenced a kingdom. Lo-Melkhiin was not always a cruel ruler. Something went wrong.

The words she speaks to him every night are given strange life of their own. She makes things appear. Little things, at first: a dress from home, a vision of her sister. With each tale she spins, her power grows. Soon she dreams of bigger, more terrible magic: power enough to save a king, if she can put an end to rule of a monster.

E.K. Johnston weaves a retelling with complexity and beauty, giving it depth, accuracy, and uniqueness. A Thousand Nights is a brilliant work of literature and deserves appreciation from the entire literary community.

The anonymity of the narrator makes the story all the more intriguing. I was drawn in by her personality and the way she remains a mystery throughout the story. Another attractive aspect of the book was the pure love shown between the two sisters. I've read a fair share of stories where sibling rivalry is a key factor in the plot, but Johnston works the sibling angle in an entirely different way. Neither sister expresses envy of her sibling; only support and loyalty are shown and this creates one of the memorable qualities of the story. The anonymous protagonist chooses to save her sister from the king and makes herself beautiful; she sacrifices herself in order to save her sibling.

The story is a bit sexist, as the king marries any woman he deems fit and then kills them; however, A Thousand Nights is also full of subtle feminism. The women in the story build each other up and strongly support each other. On the other hand, the men in the story are a unified force.

Johnston's retelling of the original tale is nothing short of brilliant, exceptional, unforgettable, and stellar. As a reader, I was pleasantly surprised with the way the story turned out and will definitely be rereading it in the future.