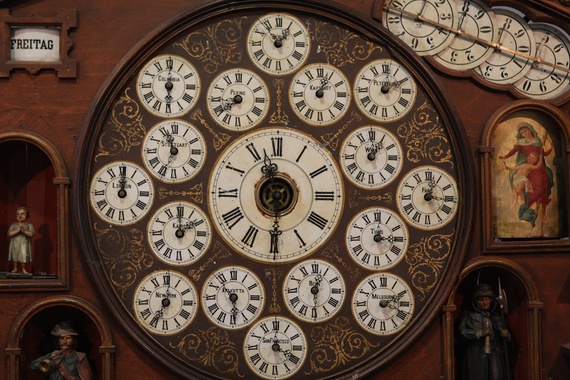 Time flies, except when you're at the German Clock Museum in Furtwangen, Germany. There, time is relative, subject to the various interpretations of the clockmakers and philosophers who built these devices, but more importantly, who thought of time and created the very concept that we now have come to accept as time.

If that sounds heavy -- and it is -- then try taking a tour of these impressive displays with your kids, and when you're on deadline. You know, as in... time's up! A deadline that, by the way, you're unlikely to meet because you can't find an Internet connection.

But there we were, in Germany's legendary Black Forest, and we had minutes to make a deadline, thanks to that six-hour time difference between our bosses back in the States, and the European mainland.

As you might suspect, the Clock Museum is full of clocks, from sundials to precision electronic timepieces -- more than 8,000 in all, making it one of the most comprehensive permanent exhibits of its kind in the world. But that, in and of itself, does not make it special.

What does set it apart is that the facility is a study in time itself. Many of the exhibits explore the concept of hours, minutes, days and years as uniquely human constructs. The museum details the early struggles to define such basic concepts as a "year" going back to the early Gregorian calendars. It doesn't take long to understand that the way we think of our place in time and space has been defined by someone at some point, and that time itself is, in a sense, timeless.

Perhaps it was ironic that I was in a place like the clock museum with little time. The problem was a photo deadline sometime around 11 a.m., which I would miss in only a few minutes if the wall of cuckoo clocks on the wall was to be believed. Oh yes, this is the German Black Forest, so the rows upon rows of wooden cuckoo clocks is mandatory. Every half hour and hour is a cacophony of ersatz bird cries.

I had my laptop computer and I had the photo, which was anxiously being awaited at my editor's office in New York. All I needed was an Internet connection and, unfortunately, the Wi-Fi hotspot was locked down with a password as most wireless access points in Germany are. The Germans are afraid the NSA is spying on them, and they are probably right.

Fortunately, I knew the museum's curator, and he knew a guy who could grant me a temporary password, which I was able to use. He must have known I wasn't NSA by just looking at me. Yeah, what kind of agent would bring his three kids to a clock museum?

I filed my photo and stayed employed for one more day.

Somewhere along the way, I found the time to continue browsing the exhibits. As a world traveler, I was riveted by the displays dealing with the invention of time zones, which then begged the question of, "What time is it in space?" Answer: Universal Time.

But at the end of the day -- sorry, I couldn't resist that one -- time is really what we say it is, and nothing more. My photo deadline? All relative.

The German Clock Museum is definitely worth a visit. I recommend doing so when you're not on deadline and have plenty of time to spend there. Oh, and stay away from the wall of cuckoo clocks on the hour. Just trust me on that.

After you've left a comment here, let's continue the discussion on my consumer advocacy site or on Twitter, Facebook and Google. I also have a free newsletter and you'll definitely want to pre-order my new, amazingly helpful and subversive book called How to Be the World's Smartest Traveler (and Save Time, Money, and Hassle).