The Aspen Art Museum might be doing tortoises a favor but probably isn't. In a new exhibit linked to the opening of a $45-million new facility, an artist named Cai Guo-Qiang, who was born in China and lives in New York, has glued iPads to several African spurred tortoises. They wander around an enclosure while a film about Colorado ghost towns plays on the iPads. In China turtles and tortoises are eaten in numbers large enough that they've essentially been wiped from vast areas of numerous countries. Even U.S. turtles are illegally caught and sent there.

So, in a way, getting iPads glued to them is not the worst thing that can happen (as long as the upright tablets don't get mistaken for shark fins, in which case all bets could be off). Numerous humane groups have complained to the museum, saying that the exhibit is cruel. The museum says it is taking pains to make sure the turtles are well cared for.

I'm willing to grant that the turtles will probably survive the experience. But if it isn't cruel, it's certainly tasteless, in the non-culinary way. This is not the relationship we're supposed to have with living things. They are not here to be treated like some kind of moving furniture. Overlooking them as living animals while using them as moving displays comes from the same place that most of our problems with wildlife comes from: the thoughtless thought that everything is here for our use and amusement, instead of seeing who they really are. 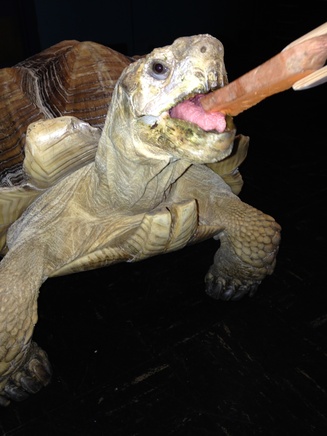 A well-appreciated spurred tortoise accepts a slice of sweet potato at the American Museum of Natural History in New York earlier this year (photo: C. Safina)

We need to stop, see, and better honor the creatures around us, not because they need us (they would do just fine if we all simply left them alone) but because we dishonor our own humanity by acting like everything is a toy. Tortoises can be remarkably interactive. They get to know individual humans who care for them, and they have favorites whose company they seek and prefer. Some respond to music; others like to play. But in Aspen African tortoises are just walking around an enclosure while on their backs plays a movie about nearby ghost towns. Neither has anything to do with the other. And I'll bet most people focus on the movie and don't think much about the creatures who have been turned into caricatures.

If people see just a walking billboard for an art project that has nothing to do with the living being that is made to carry it around, they miss the most interesting, important, and valuable part of this whole sorry exhibit: the wondrous tortoises themselves, and the chance to glean a little understanding of who they are. The turtles deserve better -- and so do we.