English professor and social anthropologist Jonathan Webber may not have known the full extent of his actions when he first felt compelled to rebuild a cemetery in the bucolic Polish town of Brzostek, where his grandfather was born. Webber's journey generated a ripple effect that may have lasting effects on his own life, but also on those of many other souls living in the here and now.

Webber's journey comes to life to winning ends in filmmaker Simon Target's captivating documentary A Town Called Brzostek, which premieres Saturday, Nov. 14 at Chicago's 27th Polish Film Festival in America. It's a must-see on a number of levels. For starters, it is hard not to lured in and deeply moved by the odyssey on which Webber embarks. The professor at the Institute of European Studies at the Jagiellonian University in Kraków, Poland reveals plenty--that 85 percent of Jewish families around the world come from Poland, but that most of them still do not hold any real love for the country that gave them a home for centuries. Target allows Webber to uncover additional historic facts about Brzostek--other things the history books may have never documented well--and we witness Webber pull out a major surprise for the sea change he is attempting to create: He invites fellow Jews from across the world to visit Poland, in an effort to shift their perspectives about their ancestral home.

The documentary does wonders with its "talking heads"--dignitaries offering their perspectives. Target has assembled an alluring and at times engrossing crew here--Norman Davies (a British-Polish historian and renowned author), American and Polish journalist/Pulitzer Prize-winning scribe Anne Applebaum, Bay Area philanthropist Tad Taube, and Chief Rabbi of Poland Michael Schudrich among them.

Other historic notables stand out: On Aug. 12, 1942, 260 Jewish people from Brzostek were gathered by the Nazis and marched into a nearby forest, only to be shot and killed in a mass grave in the Podzamcze Forest. The grave had been prepared the night prior.

Target, who wrote, produced and directed the doc, is best known for a series of television documentaries for the Australian Broadcasting Corporation (King's School, Flight for Life, The Academy, Rough Justice). He takes a moment here to discuss A Town Called Brzostek and its noteworthy unfolding.


Greg Archer: Let's start with Jonathan Webber. How did your paths cross?

Simon Target: I met Jonathan for the first time when he came to lecture in Sydney, Australia. I had spent a lot of time photographing Poland for my wife Beata Zatorska's memoir of her Polish childhood, "Rose Petal Jam." I am not Jewish (or Polish) but I was surprised to photograph beautiful synagogues there, which had survived Communist destruction, and sometimes by being privately restored by local Poles. Jonathan's wife, Connie, bought Beata's book in London, and when they came to Sydney she contacted us wanting to meet up. It was a great opportunity to learn more about Polish-Jewish history. And when Jonathan told me of the inspiring events in Brzostek, I thought I just had to make a film about it.

Greg Archer: What inspired you most about his journey?

Simon Target: Jonathan knows more about the history of the Jews in Poland than anyone I have met. He was on the board of the Auschwitz Museum--the former Nazi concentration camp near Kraków--for 25 years. He is an orthodox Jew, and his strong interest in Polish/Jewish history made him give up an Oxford professorship to live and teach in Kraków. But he seems to be a minority voice among many Jewish academics--even his own family questions his position on Poland (some of them appear in the film). I believe iconoclasts, like him, who swim against the tide of popular opinion, at some personal cost, make very interesting subjects to film.

Greg Archer: Can you speak a little about the filmmaking process and what you wanted to convey?

Simon Target: I filmed Jonathan in Auschwitz in mid-winter and in Brzostek and Kraków in mid-summer. I went several times to Brzostek to interview the locals and traveled to New York, Paris and London to meet Jewish families connected to this unlikely place. I interviewed experts such as historians Ann Applebaum and Norman Davies, and Poland's chief rabbi Michael Schudrich. It took a couple of years to gather all this material and another six months to edit it. In the end I thought the real stars of the film were the ordinary townsfolk of Brzostek. They somehow managed to distill this complex issue into something quite simple and touching.

Greg Archer: It's a remarkable work, and the facts are interesting--that 85 percent of Jewish families around the world come from Poland yet most have no bond with the homeland. Did you know this beforehand?

Simon Target: I did not know that Poland was once the center of the Jewish world, or that in the 1920s it had the largest population of Jews anywhere. As I traveled promoting books about Poland, I became aware of the anti-Polish feeling in the Jewish diaspora, which was puzzling and seemed to get stronger the further I went from Poland. Jonathan believes such negative feeling towards Poland is often based on particular Jewish folklore rather than historical fact. Sadly I think the obscenity of the Holocaust, that was mainly carried out in German-occupied Poland, has obliterated the memory of 800 prior years of successful Jewish life in Poland.

Greg Archer: Do you feel that with this film, and chronicling the work of Mr. Webber, that perhaps something can shift in regard to Jewish families looking at their homeland a bit differently?

Simon Target: Jewish audiences do enjoy my film, and are often moved by it. It helps that the message is coming from a devout man who lives publicly as a Jew in Poland today and can tell us exactly what that is like. The Jewish families I filmed returning to Poland all enjoyed the experience, and have been back since. I think traveling to Poland is the best cure for anti-Polish prejudice. Jews who, for example, visit not just Auschwitz, but also those beautiful baroque synagogues I photographed, in places like Tykocin, Zamość and Łancut, are more likely to understand the wealth of Jewish life here.

I have a Polish friend who guides Jewish tours of Poland, and says Jewish guests are often surprised by the kindness and warmth they receive, when traveling as a 'conspicuously Jewish' tour group. I think if you are a Jew who has been told all your life that Poles are anti-Semitic, you have to walk through the rynek of Kraków, Wrocław or Brzostek today, wearing your kippah or yarmulke, to realize the opposite is in fact the case.

Greg Archer: Poland is such a remarkable country with a fascinating history. Do you feel that in the past few years, there has been more attention ... or rather, more being revealed about the past--from Stalin's deportations to even the information offered in your documentary?

Simon Target; There was no open debate under the Communist occupiers, no history of Jewish life was taught in Polish schools (except the Holocaust, used as an example of the evils of Fascism). Since Poland became democratic in 1990 it has had to catch up rapidly with the West when it comes to trying to understand the horrors of the Holocaust, and the sudden removal of Polish Jewish life. But it is crucial that we study this history with balance and accuracy. It saddens me that some academics spend more time today poring over the details of reprehensible but rare Polish attacks against Jews, such as what occurred in Kielce and Jedwabne, rather than the much more common Polish efforts to hide Jews from the Nazis, at great personal risk, or the work of Żegota, the Polish council set up to aid Jews during the war. I believe such a jaundiced view of history does no person any good, and creates an inaccurate account of relations between Poles and Jews, before and after World War II.

Greg Archer: What was most interesting thing about filming this?

Simon Target: It was exciting to discover such interest in Jewish life in Poland today. I met older people who still remember Jewish friends and neighbors who left for Israel after the war. There are young Poles fascinated by the Polish/Jewish history that was hidden from their parents. Polish language and cooking is full of Yiddish influence. There is genuine interest in Jewish history in Poland today--you won't find this in Belgium or France, for example. The response to this film in Poland has been very warm, winning prizes and special screenings everywhere from Oświęcim to Białystok.

Greg Archer: What do you feel audiences will be left with after the film?

Simon Target: What most impressed me was the way the local people in Brzostek turned out to celebrate Jonathan Webber's Jewish cemetery restoration. These were not public officials or politicians with a barrow to push, but ordinary Polish folk who chose to spend their Sunday showing quiet respect towards their lost Jewish neighbors. In some ways, they were a model to the world on how to deal with all this. As the film shows, in Brzostek the Jewish and Catholic children once studied in school together and played in each others' houses and gardens. I believe that is the way it should be. We have enough hostilities in the world. It is time to tell this history accurately and fairly so an ancient brotherhood can be restored, and Polish and Jewish kids can form close friendships again, wherever they live in the world, even if just on Facebook.

Learn more about the film, which screens at 7pm, Saturday, Nov. 14, here. For more information of the 27th Polish Film Festival in America, click here. 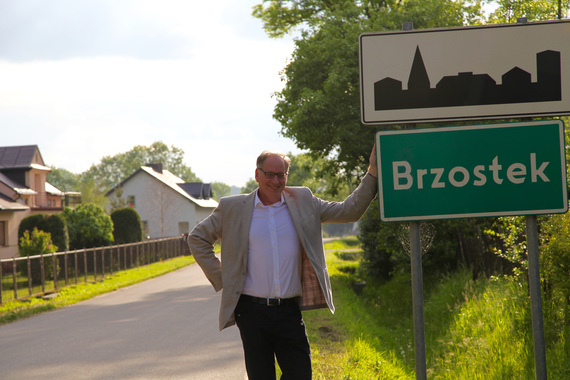