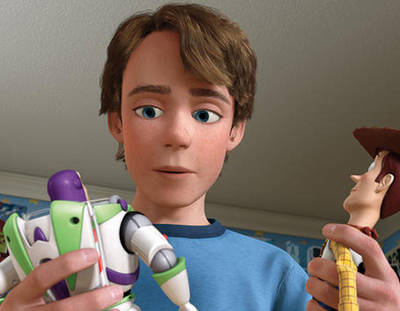 All kids have favorite movies, but autistic children tend to become obsessed with particular films. My 16-year-old son, Danny, who has autism, has chosen the Toy Story series for his main movie obsession. This is lucky for me and my younger son, because they are amazing. Pixar is the one American movie studio that has consistently produced brilliant work over the last two decades, and the Toy Story series is the jewel in the crown.

While so many movies for children are trite and preachy, the Toy Story films have soared above them all because they are deeply emotional and deal with issues of abandonment and love. Of course, the fact that they are funny and cleverly done helps, but I think it's the underlying emotional pull that draws Danny back again and again (we watch one or two of the films on DVD every Friday afternoon). In the first film, the cowboy Woody doll (voiced by Tom Hanks, his best work, in my opinion) is tossed aside by his owner, Andy, when Andy receives a much jazzier toy for his birthday, space ranger Buzz Lightyear (voiced by Tim Allen). In the sequel, Woody is stolen by an evil toy store owner who wants to sell him, along with a group of other toys who all come from the same vintage Fifties television show, to a Japanese museum for an obscene price. Here, it's Woody who abandons Buzz and Andy's other toys (his family), tempted by the vision of eternal adulation by museum-goers, and fueled by the fear that Andy will soon grow up and leave him behind. In the final installment, Toy Story 3, Andy is deciding what to do with the toys when he heads off to college. They are donated to a day-care center that is run like a prison camp until they return to Andy. On his way to college, he stops off and gives them to another wonderful child.

Danny loves to recite bits of dialogue that are especially meaningful to him. From Toy Story : "No one is getting replaced . . . I'm not worried, you shouldn't be worried." From Toy Story 2: "[Buzz to Woody] You are a toy!/[Woody to Buzz] For how much longer?"

Now, I may be reading too much into all of this, because, as I've made clear, I've seen these films hundreds of times, but I think what lurks behind the abandonment fear that colors the films is the absence of Andy's father. We see Andy's mother and his younger sister, Molly. But where is Andy's dad? He is never seen, or mentioned. In the first film, we see Andy's mom host his birthday party. Well, that's no surprise. Mothers tend to be in charge of birthday celebrations. But she is alone with them throughout, and in the last scene, there is no father present as the family celebrates Christmas.

In the second film, Andy's father is nowhere to be seen when Andy heads off to and returns from camp. And, in the last installment, he isn't there to bid Andy goodbye when Andy leaves for college.

The absence of a father character seems glaring when you look at it like this, but I admit it took me dozens of viewings to even notice it. And it began to intrigue me. So when I interviewed Matthew Luhn, one of the Pixar story supervisors who has been instrumental in all three films, for the Jerusalem Post last year, I asked him about it.

"When you make a movie you have to make sure that every single person is there for a reason. Everyone is there to help tell the main character's story. If there was a dad in Toy Story, the boy would not have had such a need for a doll who represents a kind of authority figure, like Buzz," he said. It was such a simple decision, that "we never even brought it up."

The Toy Story films are among the most popular movies for kids ever -- Toy Story 3 is the eighth highest-grossing film of all time and the three films combined have earned billions of dollars -- and the fact that these films feature a single-parent household headed by a mother has never been an issue. There is no need for even a line of dialogue in any of the three movies to explain the father's absence. This is the new American reality, and it's fine.

But, as Luhn confirmed in our interview, "Woody is driven by a fear of abandonment." And it's the unseen, never mentioned father who is behind this fear. The father is gone, and everyone carries on. But he's left hurt and fear in his wake. The power of these emotions are what make these films classics.

And Danny responds to this: "No one is getting replaced. I'm not worried, you shouldn't be worried."

But we're all worried. So while the dads are being celebrated on their day, you might want to give the single moms in your life new copies of the Toy Story DVDs.

Author, "If I Could Tell You"