Warning: The following post -- including the video below -- contains mature content. It is intended for adult audiences. Viewer discretion is advised.

There are two constants in my life: art and exercise. Art started first, then after a serious childhood illness I discovered my body through lifting weights. I am now a visual artist and a personal trainer. My brush with mortality is something I see in the clients that come to me on a daily basis. Whether it's recovering from heart surgery or bringing news of a brand new osteoporosis diagnosis, many of these people have come face to face with the limits of the mortal body.

Cuts: A Traditional Sculpture consists of a two-channel video installation, a pin-up, a photographic series and a zine. Last year I was asked to become an artist researcher by Los Angeles Goes Live (LACE). They were mounting an exhibition called Los Angeles Goes Live: Performance in Southern California 1970- 1983. I was commissioned by LACE to create a new artwork that spoke to the rich history of performance in Southern California. I hungrily delved into their archives and chose two works to guide me: Eleanor Antin's Carving: A Traditional Sculpture, 1972 and Lynda Benglis's 1974 Artforum magazine intervention advertisement. I wanted my new work to interpret these feminist pieces, which take on gender, power and the body. I project these works into a context exploring what it is to be transgendered in today's society.

Antin photographed herself while dieting as a take on how Greek sculptors found their ideal form by discarding unnecessary material from their marble blocks. Rather than crash diet, over 23 weeks I built my body to its maximum capacity. I did this by adhering to a strict bodybuilding regime constructed by master bodybuilding coach Charles Glass. David Kalick, a nutritionist specializing in diets for sports competition, designed a diet where I consumed the caloric intake of a 190-pound male athlete. I also took mild steroids for eight weeks of the training.

I documented my body as it changed, taking four photos a day, from four vantage points. I collapsed 23 weeks of training into 23 seconds, creating a time-lapse video (part of the two-channel installation Fast Twitch Slow Twitch). Juxtaposed against the speed-up of the time lapse are painfully slow motion scenes that depict moments from my training -- a raw egg dropping into a mouth or a face as it "maxes out." The audio in the installation is by San Francisco-based band Barn Owl. The music's sonic layering echoes my body's growth.

PHOTOS of my training (story continues below):

When my body reached a peak condition in its transformation, I collaborated with photographer Robin Black to stage a homage to Benglis's advertisement. In 1974 Benglis was an artist hard at a work who could not get proper recognition while all her male counterparts seemed to be flourishing. As a criticism of her ostracism, she purchased a spread in the art industry's most recognizable art magazine at the time, Artforum. The spread featured a photo of herself nude with tan lines and sporting a giant, double-ended dildo that was inserted in her vagina. This image shocked and dismayed. It was certainly not considered feminist at the time, and she came under harsh criticism. The image is powerful still, as is its message.

Heather is one of those people, a true punk with the kind of fearlessness that most biological men wish they were born with. I found him/her fascinating from the moment we met and couldn't wait to get him/her in front of my lens. I have often shot nudes or sexualized images of men, in particular heterosexual men. And it was through this work, that quite by accident, I developed a reputation as gay male photographer. It seems to have come about from a lack of personal information online where it could be connected to my images and my gender neutral name. Since no information to the contrary was provided, people assumed that given the straightforward nature and sexual context of the images (i.e. the occasional erect cock), I must be a homosexual man. Soon, gay men's magazines were contacting me to shoot images for them. This all went along swimmingly when it was over email. I never said I was a man, I just didn't make a point of saying I was a woman and frankly, no one ever asked. One day, the editor from a gay publication that I had long admired called me to discuss details for our upcoming shoot:

"Hello, may I please speak with Robin Black?"

"I'm sorry, did you say this is Robin Black?"

"Can I call you back? We need to discuss this at the office!"

Luckily it ended well, the editor called me back and let me know that they had decided to run my photos regardless.

For our tribute to Benglis, rather than buying advertisement space in Artforum, we will use Black's connections in the gay fashion/art publications (both online and off) to disseminate Advertisement (Homage to Bengalis). Substituting my ripped, masculine physique for a double-ended phallus, we created the blog and a periodical called LADY FACE//MAN BODY. Placing Advertisement (Homage to Bengalis) within these contexts signals the shifts in our cultural landscape, and the role of artists like Benglis in bringing about those changes. LADY FACE//MAN BODY is a collection of iconic pin-ups of a body that challenges the viewer. We wanted to create a publication that bodied forth a self-determined trans identity.

This project took over my life. I need to thank my future wife for putting up with the neurosis that ensued as a result of pouring so much of myself into this over the last six months. I had to force-feed myself to get the nutrients in. I could not leave the city as I had vowed to take those daily photographs. I needed to eat every three hours and train five days a week for two hours (at least), and I wanted to uphold the parameters of the project with as much rigor as possible. Within the training I pushed past what I thought was humanly possible for my body and I reached new terrains of strength and power.

In addition to being inspired by Antin's initial project, I did this work to explore the social expectations of what a "woman's" body could be pushed to. This project is about gender and its signifiers. As an artist and as a personal trainer, I have been interested in exploring the body as material conditions for self-expression. As a trans person who does not yet want to have surgery or take full-on hormones, I was interested in what I could do via my diet and exercise to go through a gender transformation.

I wanted this project to be a reflection of the value that is placed on the surface and what goes into constructing that surface. This is why I decided to take the steroids. I decided they were necessary for creating the extra mass on my body and for the end image to be extreme enough to meaningfully engage a society obsessed with extremes. As a personal trainer I do not believe in or condone steroid use, but as Antin had starved herself for an image, I too felt it was a necessary sacrifice to point toward larger social issues.

A Word About the Steroids:

I minimized the risk of taking steroids. I got blood tests before and after and I took half of the lowest dose recommended. The weights that had felt like lead the weeks before suddenly felt like feathers in my hands. And I mean suddenly. It was alarming for me, a person so centered and aware in my body, to all of a sudden grow this new flesh, which also grew these new nerve endings. I felt disoriented by it -- I needed to learn to use this new body so quickly. It became difficult to sense my limits: what was too much weight? The muscles could handle it, but what about the stabilizing joints and tendons? This dysphoria spread to other parts of my life. I felt ungrounded and in flux -- like my inner compass was off.

I also felt like shit. I was so tired all the time from all the heavy lifting. My joints ached constantly, and my muscles became so tight that my girlfriend had to take my t-shirt off at night because I was no longer flexible enough to do so myself. During the duration of this project I continued to work full-time, and my personal training clients witnessed my transformation performance first-hand.

This project was all about consumption: my grocery bill sky rocketed to $1,000 a month, my hormones fluctuated with the androgen I had taken into my body, and my cells tried to figure out if I was male or female. This project was also a reflection of how so much of how we live our lives is unsustainable. Let alone the cost of maintaining this body, injury was imminent, and though I managed to stop before it got too bad, it was just a matter of time before I was limping around with buckled knees like all the other bodybuilders. I stopped this project on July 27. On this day I stopped the creatine and the steroids. I stopped force-feeding myself, and I took two weeks off the weights. Within 14 days I had shed eight pounds of muscle. My skin grew thick as the testosterone withdrew from my system. My moods swung.

It was also empowering. At the peak days of my transformation, I could perform a 650-pound leg press, and I could bench press 165 pounds. I got respect from the serious meatheads in the gym, and I was able to split the seams of my shirts (Incredible-Hulk-style). In total I gained 23 pounds of muscle.

People took notice of me. When my body crossed over from socially acceptable ripped chick to freaky androgyny, it was noticeable for me in my day-to-day interactions. Teams of guys would bust out laughing after checking out my bulging pecs, realizing they were breasts. I got challenged to arm wrestling competitions in a Rite Aid pharmacy store. On a couple of occasions I had people try to fight me.

This anger was one of the true indicators of success for me. I had achieved a confusing body that ruptured expectation. It was this body that Robin and I set out to photograph in her studio. We wanted to use traditional modes of beauty to create an iconic image of a body that would get raped and murdered in other parts of the country/world. A self-determined body -- the way I wanted to see myself.

Los Angeles Goes Live: Performance Art in Southern California 1970-1983 has been made possible by my major grants from the Getty Foundation. 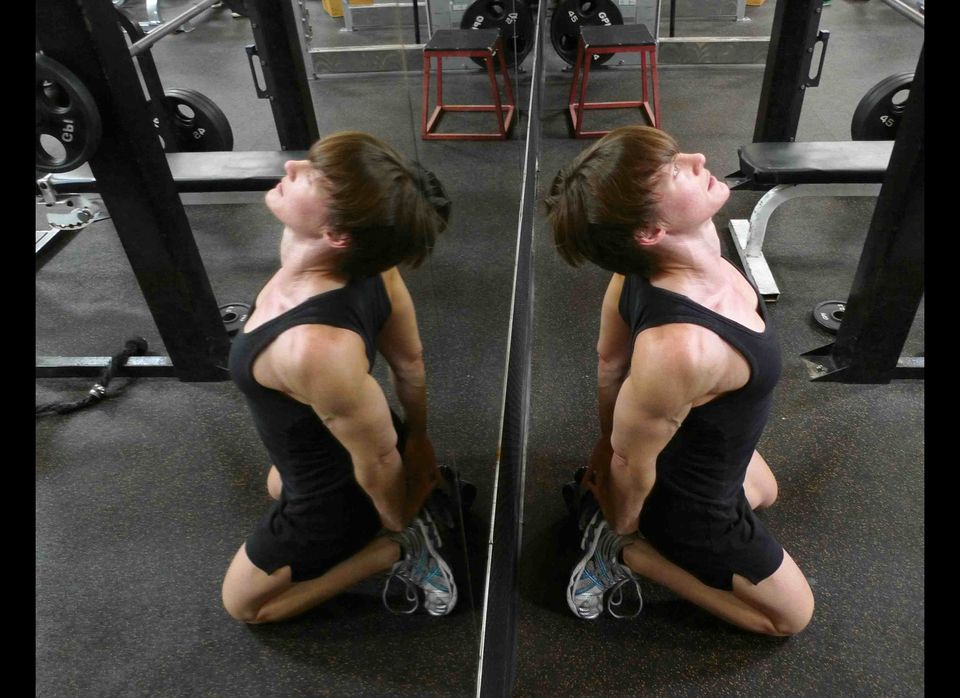