There is no other place like the Michigan Womyn's Music Festival, which has been referred to by generations of feminists simply as "The Land." When you arrive at the gates, you are always greeted with the words "Welcome Home." I am a transgender woman, and I have attended "MichFest" twice -- in 2010 and 2011. Like many women before me, the Land is indeed my home. Sadly, it was made very clear to me in 2011 that I would not feel safe returning there. 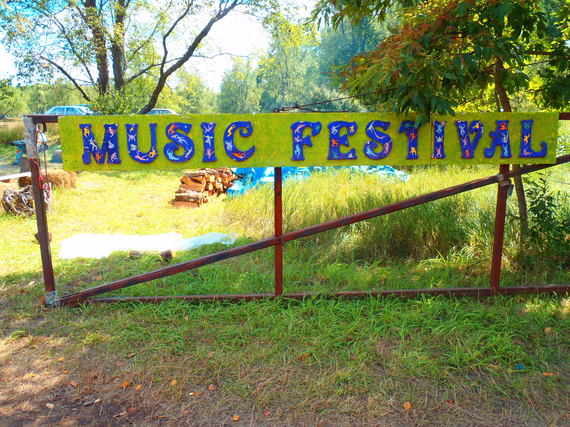 MichFest is often seen as a monolithic symbol of transphobia and radical feminism gone wrong, but that denies the incredible diversity of the women who have been part of the festival over its nearly four decades of existence. I went there to help myself understand my identity through experiencing feminist and lesbian history. It was a good decision -- I had never been in another space where queer women in their 20s volunteer side-by-side with lesbians in their 70s while building a community. From assembling the various stages at MichFest, to driving the shuttles, to cooking the meals, to volunteering at the medical center -- everyone takes part in running the festival, and every attendee does two four-hour workshifts.

The second year I attended MichFest I went as part of the organization Trans Womyn Belong Here (TWBH), and we worked to mobilize allies of transgender women and build transgender safe-spaces within the festival. TWBH organizers, including myself, also ran workshops about transgender inclusion, which meant my name was in the official MichFest program next to the word "transgender." My workshop was a success, and I got to know many long-time attendees and staff who were dedicated to making the festival they loved into an inclusive space they could be proud of.

One of my fondest memories of MichFest was my first all-woman mosh pit. We were thrashing around to delightfully angry music in an aggressive but well-regulated fashion, much like the many women's roller derby bouts I've skated in. One woman showed up with about a dozen kids from the day care. The kids saw people crowd-surfing, and wanted in too. We organized ourselves in two lines, arms ready to receive on-coming children, and whisked them up to the front of the stage. It was crowd-surfing unlike any I've ever experienced. It was gentle, caring and punk-rock at the same time.

Both years I attended MichFest I volunteered at the medical center, also known as the "Womb." The second year I was mentored by an herbalist in her late 70's. We talked about environmental justice, Monsanto, pharmaceutical companies, lack of quality research on herbal remedies, science, how women healers are often marginalized by our culture, and more -- and we had a lot of beliefs we shared.

Because she was wearing the red badge.

The red badge was derived from the red t-shirts originally worn by transgender exclusionists as a counter-protest to the white "Trans Womyn Belong Here" t-shirts. When more women wanted to join the counter-protest, and/or the group ran out of clean red shirts, women started just pinning red pieces of fabric to themselves to symbolize trans-exclusionary beliefs. 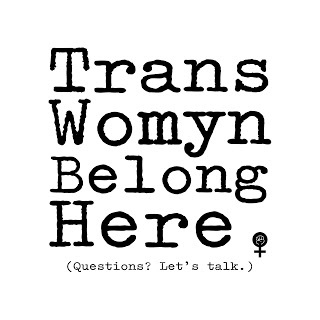 I avoided any mention of "transgender" during my conversations with medical staff at the Womb. More than once I had been tempted to out myself, but I didn't because I wanted to be my mentor's friend and learn from her. I don't think she "read" me as transgender. A part of me hopes she did though, because then perhaps I opened her mind up. Maybe I was a coward for not standing up for my transgender sisters on the land -- how would they be treated if they were faced with an emergency and needed help from medical staff?

There is a ceremony to close out the festival each year, sending healing energy for people to take with them to the world outside. Even as an atheist I was moved by such a stunningly beautiful display of shared love and kindness, with people holding hands and singing together. The range of voices also surprised me -- there were many different voice types filling the clearing in the woods. Acting on a strange impulse, I let my singing voice drop lower than I had for years, encouraged by the fact that there were many even deeper.

That first year the ceremony moved me to tears of joy; for the richness of the experience -- and tears of sadness that I'd have to wait another year to return.

At the closing ceremony the next year, however, I couldn't help but focus on all the red badges on display, and those same feelings I felt my first year were inaccessible to me. My tears burned on my cheeks; born of indignation, pain and loss from seeing so many women wearing what I could only see as symbols of hatred. I knew then that there would be no return to the Land.

Nearly two years later, I still get upset thinking back to that moment. There was no rational, intellectual defense I could muster strong enough to stand against the pain I felt from others denying my place in women's space, even though I'd devoted many years to feminist and queer activism. It didn't matter that I'd organized the Clothesline Project at my college to bring attention to victims of sexual assault. It didn't matter that I'd volunteered at a harm reduction organization in Philadelphia that helped keep sex workers safe. It didn't matter that I was a regular contributor to humanist blogs writing about reproductive justice and LGBTQ issues.

When people all around you are telling you directly that you have no claim to your womanhood, that there is no way you are welcome, and that by merely existing you are furthering the patriarchy, it cuts right through to your heart.

It took years for me to feel like I could share this story. But I cannot remain silent and let the bullies win. If they do, they will drag down with them every compassionate, kind, loving woman at the festival who gave me hope, joy and confidence. We cannot let them win if we want MichFest to survive. Their hatred will keep countless women, cisgender and transgender, from attending MichFest, denying them the transformative experience that is the true promise of the festival. If the bullies win, the Land will die.

To save the Land, we cannot counter hate with hate. Denouncing MichFest as outdated, irrelevant, or out-of-touch will only dig our enemies in deeper and drive potential allies away. Even worse, if we do so we lose the opportunity to bridge the gap between generations of feminists, and divorce ourselves from our own history. An inclusive festival can inject new life into our collective fight against sexism, racism, classism, homophobia and transphobia.

I stand with Equality Michigan, the National Gay and Lesbian Task Force, and every other organization and individual who believes that MichFest must become inclusive of transgender women so it can thrive. Together, we can show to the world the value, honor and beauty of the true potential of Michigan Womyn's Music Festival.

I want to be able to return to the Land feeling welcome and safe. MichFest is my home too.