Michael Jackson will be remembered, most likely, as a shattered icon, a pop genius who wound up a mutant of fame. That's not who I will remember, however. His mixture of mystery, isolation, indulgence, overwhelming global fame, and personal loneliness was intimately known to me. For twenty years I observed every aspect, and as easy as it was to love Michael -- and to want to protect him -- his sudden death yesterday seemed almost fated. Two days previously he had called me in an upbeat, excited mood. The voice message said, "I've got some really good news to share with you." He was writing a song about the environment, and he wanted me to help informally with the lyrics, as we had done several times before. When I tried to return his call, however, the number was disconnected. (Terminally spooked by his treatment in the press, he changed his phone number often.) So I never got to talk to him, and the music demo he sent me lies on my bedside table as a poignant symbol of an unfinished life. When we first met, around 1988, I was struck by the combination of charisma and woundedness that surrounded Michael. He would be swarmed by crowds at an airport, perform an exhausting show for three hours, and then sit backstage afterward, as we did one night in Bucharest, drinking bottled water, glancing over some Sufi poetry as I walked into the room, and wanting to meditate. 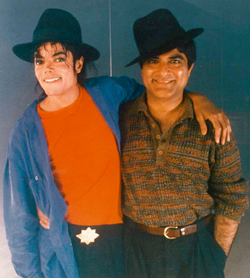 That person, whom I considered (at the risk of ridicule) very pure, still survived -- he was reading the poems of Rabindranath Tagore when we talked the last time, two weeks ago. Michael exemplified the paradox of many famous performers, being essentially shy, an introvert who would come to my house and spend most of the evening sitting by himself in a corner with his small children. I never saw less than a loving father when they were together (and wonder now, as anyone close to him would, what will happen to them in the aftermath). Michael's reluctance to grow up was another part of the paradox. My children adored him, and in return he responded in a childlike way. He declared often, as former child stars do, that he was robbed of his childhood. Considering the monstrously exaggerated value our society places on celebrity, which was showered on Michael without stint, the public was callous to his very real personal pain. It became another tawdry piece of the tabloid Jacko, pictured as a weird changeling and as something far more sinister. It's not my place to comment on the troubles Michael fell heir to from the past and then amplified by his misguided choices in life. He was surrounded by enablers, including a shameful plethora of M.D.s in Los Angeles and elsewhere who supplied him with prescription drugs. As many times as he would candidly confess that he had a problem, the conversation always ended with a deflection and denial. As I write this paragraph, the reports of drug abuse are spreading across the cable news channels. The instant I heard of his death this afternoon, I had a sinking feeling that prescription drugs would play a key part. The closest we ever became, perhaps, was when Michael needed a book to sell primarily as a concert souvenir. It would contain pictures for his fans but there would also be a text consisting of short fables. I sat with him for hours while he dreamily wove Aesop-like tales about animals, mixed with words about music and his love of all things musical. This project became Dancing the Dream after I pulled the text together for him, acting strictly as a friend. It was this time together that convinced me of the modus vivendi Michael had devised for himself: to counter the tidal wave of stress that accompanies mega-stardom, he built a private retreat in a fantasy world where pink clouds veiled inner anguish and Peter Pan was a hero, not a pathology. This compromise with reality gradually became unsustainable. He went to strange lengths to preserve it. Unbounded privilege became another toxic force in his undoing. What began as idiosyncrasy, shyness, and vulnerability was ravaged by obsessions over health, paranoia over security, and an isolation that grew more and more unhealthy. When Michael passed me the music for that last song, the one sitting by my bedside waiting for the right words, the procedure for getting the CD to me rivaled a CIA covert operation in its secrecy. My memory of Michael Jackson will be as complex and confused as anyone's. His closest friends will close ranks and try to do everything in their power to insure that the good lives after him. Will we be successful in rescuing him after so many years of media distortion? No one can say. I only wanted to put some details on the record in his behalf. My son Gotham traveled with Michael as a roadie on his "Dangerous" tour when he was seventeen. Will it matter that Michael behaved with discipline and impeccable manners around my son? (It sends a shiver to recall something he told Gotham: "I don't want to go out like Marlon Brando. I want to go out like Elvis." Both icons were obsessions of this icon.) His children's nanny and surrogate mother, Grace Rwaramba , is like another daughter to me. I introduced her to Michael when she was eighteen, a beautiful, heartwarming girl from Rwanda who is now grown up. She kept an eye on him for me and would call me whenever he was down or running too close to the edge. How heartbreaking for Grace that no one's protective instincts and genuine love could avert this tragic day. An hour ago she was sobbing on the telephone from London. As a result, I couldn't help but write this brief remembrance in sadness. But when the shock subsides and a thousand public voices recount Michael's brilliant, joyous, embattled, enigmatic, bizarre trajectory, I hope the word "joyous" is the one that will rise from the ashes and shine as he once did.