Maps are typically perceived as practical, neutral objects -- the road map in the glove compartment of your car is a faithful representation of the terrain through which you’re traveling, not a political or artistic statement. Well, of course it’s not that simple; for one thing, the earth is not as flat as the pages of a map, so maps must be distorted to some degree. Choices must be made about which towns and cities will be put on the map, where to draw certain borders. To some extent, nearly every map contains an agenda, whether political, sociological, or commercial.

A recent book by Tim Bryars and Tom Harper, A History of the 20th Century in 100 Maps, charts the political and social upheavals of the last century by means of maps, digging below the functional surface to reveal how maps of the time reflected popular ideas, prejudices, and waves of progress. The 20th century, the authors explain, was a particularly fertile time for mapmakers, and the book showcases maps in the form of picture postcards, board games, and book endpapers, maps meant for government purposes and maps intended for mass consumption. The highly eclectic result serves in itself as a reminder of the myriad ways in which we see and interpret the world around us.

The map excerpted below, a 1900 board game entitled A Trip to the Continent, may only seem like a map in the loosest sense, but its depiction of the geography and travel routes between England and Continental Europe offers a telling glimpse into its era. Though no rulebook is available, players would presumably race from London to Berlin, choosing from three available routes and likely using dice or a spinner to determine their progress. The game seems painfully simple, but the layout is fascinating. As the authors note, “A decade later a ‘race to Berlin’ would have carried entirely different connotations, but in the years leading up to the Great War, Germany was one of the top tourist destinations.” The concept of continental travel as a popular pastime also bespeaks the increasing ease of international travel around the turn of the 20th century, the authors point out: “Travel would never again be the preserve of a monied elite … Some Britons were already seeking out unspoiled corners where they wouldn’t hear another English voice, especially a ‘cockney’ or lower-class one.” Sound familiar?

Here's the full board game, excerpted with permission from A History of the Twentieth Century in 100 Maps; for more about the game and 99 other fascinating maps from the previous century, consult the full book: 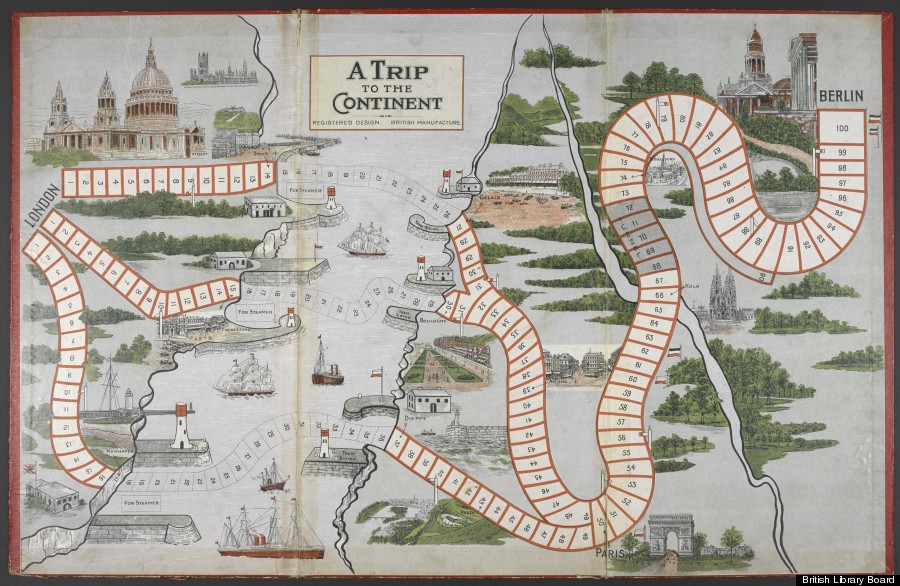 Reprinted with permission from A History of the Twentieth Century in 100 Maps by Tim Bryars and Tom Harper, published in the United States by the University of Chicago Press.

Text © 2014 by Tim Bryars and Tom Harper. Illustrations © 2014 by The British Library Board. All rights reserved.