Our 2008 analysis of global warming misinformation finds that there was a very significant upswing in online activity.

This trend should be troubling to US policymakers and campaigners wanting to implement new greenhouse gas reduction strategies.

Here's the stats I've generated as evidence of my conclusions (click any of the images to enlarge): 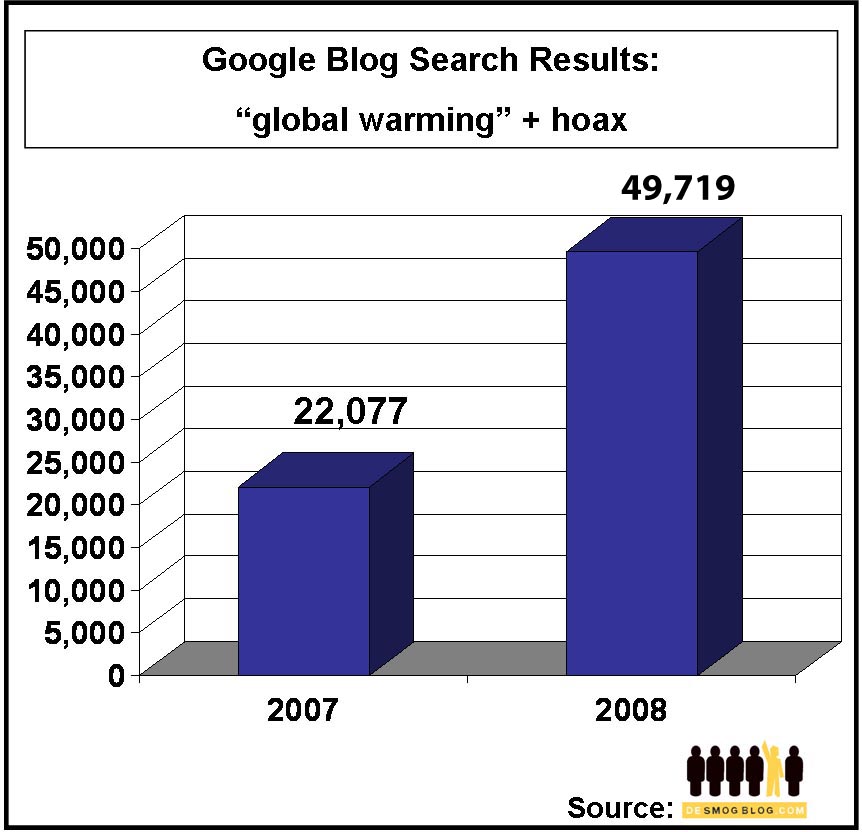 Outside of a small band of ideologically motivated outlets, the majority of the mainstream media is unwilling to cover the nonsensical junk science of the right-wing think tanks and their cadre of scientists for hire. With this the case, the Internet is exploding with such information. And at the same time that we're seeing significantly more of this misinformation being spread about global warming online, we're also seeing more people than ever using the Internet as their main source of news and information.

Here's some recent findings that should trouble anyone working to implement new laws to reduce greenhouse gas emissions:

1) The Internet is now a larger source of news for people than newspapers.

Research conducted in December, 2008 by the Pew Research Center for the People and the Press found that the Internet is now used as a news source by more Americans than newspapers. The report found that: "for the first time in a Pew survey, more people say they rely mostly on the Internet for news than cite newspapers (35%). Television continues to be cited most frequently as a main source for national and international news, at 70%."

In an average month more than 2.2 million people in the United States search for the term "global warming" on Google and another 368,000 people search for the term "climate change." The more climate misinformation that is posted on the Internet, the more likely that people searching for information on global warming will be exposed to it. In fact the number 2 search result for "global warming" on Google is currently a website run by the thoroughly discredited Competitive Enterprise Institute.

And the results of all this?

Opinion polls conducted in the United States over the last year confirm the upward trend in people who believe that global warming is not caused by human activity. One series of polls conducted by Rasmussen Reports found that between April and December, 2008 the number of respondents who attributed global warming to "long term planetary trends" and not human activity increased from 34 percent to 43 percent.

This upswing is in spite of the 2007 United Nations Intergovernmental Panel on Climate Change (IPCC) releasing a report by top climate scientists from around the world concluding that global warming is "very likely"--or 90 per cent certain--caused by humans burning fossil fuels.

Legislators are going to be very hard pressed to implement strict new greenhouse gas regulations if almost a majority of the public believes that climate change has nothing to do with human activity. As will environmental groups who are urging average citizens to take personal action to reduce their carbon footprint.

Many people (even some well-known climate activists) have told me that the "deniers' days are over," so I hope these statistics are a wake-up call.

If this is going to be the year that we have the political leadership in the United States with the will to take real action on climate change, we're all going to have to double, or even triple our efforts to dispel the myths and lies being spread online about the realities of the situation.