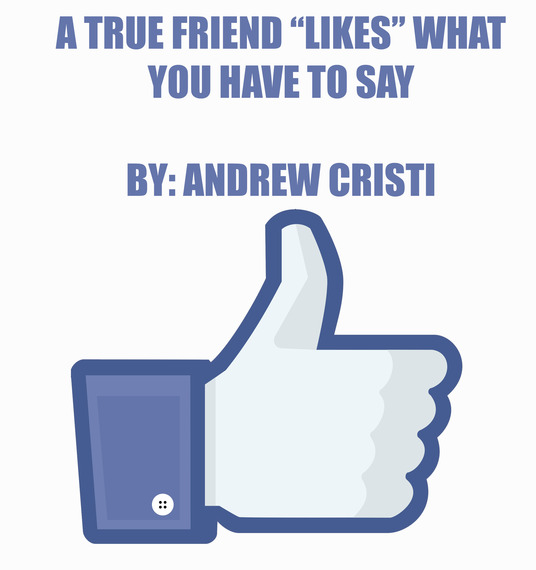 I was recently hanging out with a friend. On that particular day she was in a sad state, bemoaning her boyfriend problems. She is known for turbulence in her love life, but this issue seemed sillier to me than usual.

"I posted a picture, and it got 52 'likes,'" she told me. "My boyfriend couldn't 'like' that, but he could go and comment on this other girl's status?"

I kept trying to convince her that it's ridiculous to be upset about something like that. If their biggest problem is a failure to "like" a Facebook photo, I reasoned, then all I can say is, "#Firstworldproblems." Their relationship wouldn't seem to be in quite as much trouble as she apparently believed.

But then I thought about it further. In fact, I couldn't get it out of my head.

The truth is that there is nothing that I hate more than when good friends of mine meet each other for the first time and then immediately "friend" one another on Facebook and start thirstily "liking" every little thing the other posts, while never "liking" a single thing I post, even though I know they read everything I write. It's infuriating!

We have reached a day and age where a "like" is so much more than a "like." It's a weapon. It can be used to terrorize people. It can be a flirtation, or a game of Cat and Mouse. It can be a social obligation.

Now, I know I'm not saying anything we don't already know. This isn't news. It's clear as day that Facebook has a nice, tidy way of facilitating the destruction of relationships through the simple click of a button. But nothing is going to stop it now, so instead of constantly trying to fight it by deactivating your account every other minute or saying, "I'm not a Facebook person," you need to learn how to embrace it. Here's how.

A true friend "likes" what you have to say.

A true friend is reading up on you and watching over you and investing in you, and to show that, they are giving you that simple click of approval that says, "I feel you."

They are letting you know that they have your back.

They are not adding your friends and "liking" their crap simply to try to get with them. They are not ignoring your posts. They are your friend for a reason. They hear you (or, in this case, read you).

It's a simple click of a button that shows a person that you're there for them. In a weird way, there's nothing more reassuring than seeing the name of someone you truly care about pop up next to that thumbs-up sign, or seeing a comment from them. There's something astoundingly comforting in knowing that someone you love is watching over you.

My friends are always shocking me by telling me how deeply and thoroughly they read everything I write. I'm always so touched. It's like one gigantic thumbs-up sign in my face.

So in a world full of what can sometimes seem like extraneous "friends," when the name of someone you actually care for shows up beneath something you post, it warms you.

Try to keep that in mind the next time you tell yourself, "It's only Facebook," and you go off and "like" someone else's stuff or give someone else a comment that could carelessly and hurt a friend.

Because let's face it: Cheating on people with "likes"? That hurts.