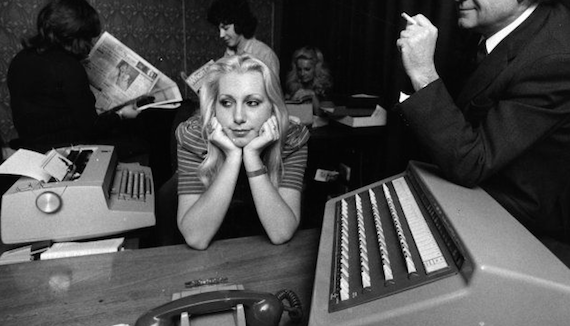 Do you ever think about how much the average office life has changed in the past 5 years alone? How about over 30 years? A friend of mine who worked for the same company for 34 years shared his most compelling reflections and short stories.

1. There were no computers in the office. This made life Interesting as a trainee COBOL programmer.

2. We worked Flexi Time, and clocked in and out to record our hours. Extra hours above the standard 37.5 worked in a week could be taken as days off.

3. Those who worked on higher floors were credited with extra time to make up for the additional minutes it took them to reach and descend from their office.

4. There was a (paper) Standards Manual, which was regularly updated and referred to.

5. Almost everyone in the building was an employee, from senior management through the computer operators, receptionists, print room and mailroom.

6. 90% or more of my time was spent coding, testing, debugging. I spent almost no time in meetings. I remember very few meeting rooms in the building.

7. Our focus was entirely on our own department. For the most part, we had no contact with other divisions as well as little awareness of other parts of the company.

8. A notable exception to the lack of communication between departments was an annual sports gathering. Teams from different parts of the company would spend the day sporting together. When evening arrived, we enjoyed a full night of eating and drinking. I recall these to be some of my finer days at work.

9. Promotions were reputedly discussed and settled next door outside of the office at a local pub.

10. About half the office workers smoked in the office.

11. There was a bar in the building, open and well used at lunchtime and after work.

12. It was common for lunch to continue past 3pm in the pub, especially on a Friday.

13. Even quite junior level managers had their own office and it was rumored they would occasionally sleep off a heavy lunch in the afternoon.

14. In my first couple of years the rate of inflation was such that there were frequent pay rises through the year.

15. There were inappropriate calendars hung on the office wall. Initially these were of female calendar girls, but when a male calendar was put up by way of protest, all calendars were banned.

16. There was no email, just occasional paper circulars, which gave details of upcoming social events.

17. People didn't really think about safety then, at least as far as getting the coffee! We took turns bringing coffee around and a tray of cup-holders was obtained specifically for this purpose. There were no lids on the cups. You'd be told if you weren't pulling your weight, although there were still persistent offenders.

18. There was no remote working. If you got paged overnight, you either talked the operators through a fix over the phone, or you drove into work.

19. A very good lunch was quite cost effective. Managers paid a bit more than other office workers and received waitress service in a separate dining room with a glass of wine. Within a year I had gained 28 lbs., albeit from a malnourished student starting point.

20. Men in the office generally wore a suit and tie. One of my colleagues was refused a promotion for not having his top button done up.

Which memory do you find most intriguing? How has office life changed for you? What areas do you feel are for the better or for the worse?