Every city it seems, wants to be a "Smart City" by using technology to solve our current problems of water use and supply, energy consumption, transportation efficiency, mobile healthcare, police, fire, and safety; and to lay the foundation -- certainly the bandwidth -- for future savings of the city and increased revenues for businesses and individuals.

While the savings and the increased revenue streams appear attractive, the difficulties appear insurmountable. In part, because the "City of the Future" is not a city at all, but a powerful economic region; and, the "Internet of Everything" (IoT), where everything is connected to everything else and through the Internet cities will be able to offer services unheard of today, is critical to the entire region. 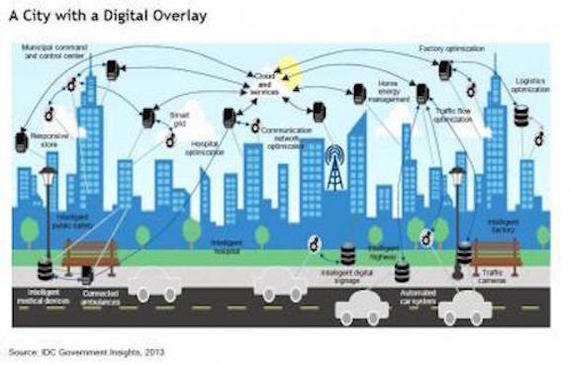 It is these regional -- metropolitan -- economies that foster quality places, vibrant downtowns, attractive town centers and historic, older suburbs that feed the development and acquisition of human capital, financial capital and contribute to efficient, sustainable growth. Regions have replaced nations, and even cities in the usual sense, as the engines of economic growth.

As Bruce Katz, a founding director of the Metropolitan Economy Initiative at the Brookings Institution in Washington D.C, has pointed out:

There is a fundamental disconnect between how we live and work in large portions all over America and how we govern...The mismatch between governments and the economy undermines the competitiveness of places by raising the costs of doing business, exacerbating strong development trends, squandering urban assets and deepening racial and class separation.

Most people already live in one jurisdiction, work in other, and play or dine in a third. They have no idea that the cost to them is enormous because of the duplication and waste. Moreover, they do not realize that the new creative and innovation economy demands greater cooperation and consolidation, if politically possible, to save money, and to reposition itself in the new global economy.

It is cheaper, sure, but the real reasons are to stimulate economic prosperity. As syndicated columnist Neil Peirce has pointed out, these new "city-states" as he calls them, "have a shared identification, function as a single zone for trade commerce and communication." And together they can share their ideas for the IoE.

Goldman Sachs calls the Internet of Everything (IoE) the 3rd wave, and points out that:

The 1990s fixed Internet wave connected 1 billion users... the 2000's mobile wave connected another 2 billion. The IoE has the potential to connect 10X as many (28 billion) "things" to the Internet by 2020, ranging from bracelets to cars" to whole new systems of daily life promising mobile health care, vastly improved transportation systems, energy and water consumption controls, and more.

According to Cisco Systems, IoE could generate $4.6 trillion in value for the global public sector by 2022 through cost savings, productivity gains, new revenues and improved citizen experiences... "Cities," they emphasize, "have the potential to claim almost two-thirds of the non-defense (civilian) IoE public sector value. Cities, they believe, will capture much of this value by implementing killer apps in which "$100 billion can be saved in smart buildings alone by "reducing energy consumption."

Now more than ever, cities and counties within regions must work together to do joint governmental planning and development, and provide police, fire and safety services, land use, transportation and telecommunications systems as well. The cities within a region, the county, federal and state government agencies in the area, and for that matter all schools and hospitals, and non-profit agencies can build the new information infrastructures, as waterways, railways and highways were in an earlier era, and deploy them to offer vital public services.

The new global knowledge economy, not to mention our current fiscal crisis, demands that government rethink how to organize itself to be most competitive. That might mean cutting out a city council or two or other top administrative posts in the name of efficiency. At minimum, it means cities within a region (including the counties) ought to be jointly pursuing opportunities to operate services together.

San Francisco Mayor Ed Lee recently called for an amplified effort that requires a network of communication between boundaries and jurisdictions, "In order to make great and livable and thriving cities we have to think and work collaboratively," thus signaling the need to think broadly about the whole region. 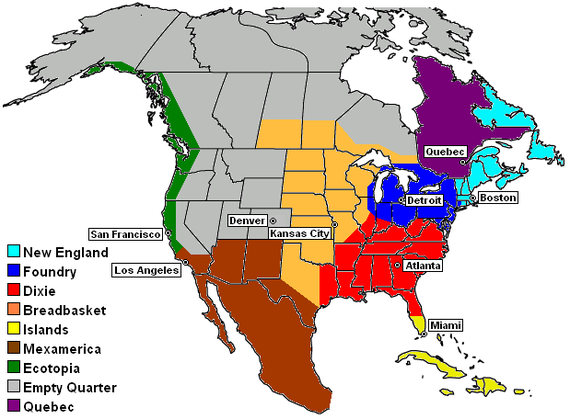 Although a few smaller cities or a city and county have consolidated, most regions are still fragmented and governments are struggling to provide even the most basic services. Larger cities are experiencing the same problems, but the real loss is not simply municipal deficits, it is the loss of the metropolitan region to brand itself and develop a forward thinking economic development strategy. Mega-regions as featured above won't happen overnight but the image displaying the "Nine Nations of North America" isn't farfetched.

Many corporations have identified the way forward and the applications that make cities smart. Whatever model a city chooses, initial consultation with Cisco, IBM, Siemens, Intel, Verizon, QUALCOMM, AT&T, HP, Microsoft or one of the many companies that have invested in the enormous role the IoT can play, renewing and reinventing cities, they are ready to help.

To date, city leaders have not awakened to the challenges and the opportunities before them. But cities must begin. Embracing technology, identifying opportunities, and finding more ways to collaborate at the state, county and city level is key to our nation's success and survival.