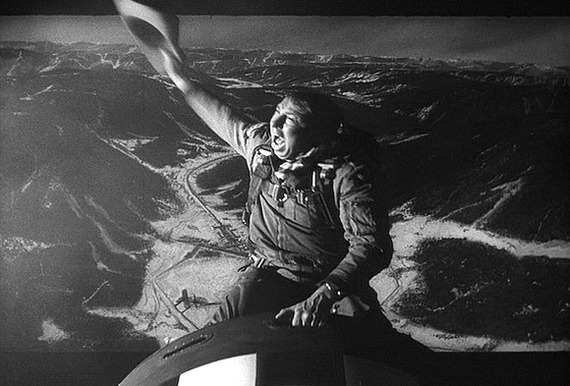 I don't know about you, but I think Donald Trump would make a great President. Not 'great' in a J.F.K. sort of way, mind you. Rather, 'great' in a Kardashian kind of way. And, isn't that what it's all about these days?

Not to beat a dead mule, but if you can come up with a better buzzword than Kardashian to instantly capture the culture and the mindset of the moment, I'm all ears. This is a family who do absolutely nothing. Yet, they make millions of dollars, are known by everyone, everywhere, are in the headlines every five minutes, can get a table at any restaurant in the world, are invited to every important event/opening/premiere, nationwide, and have carved an empire, not based on hard work and ethics, but the exact opposite (if it weren't so scary, it would be admirable).

So, who better to run a country whose population seem to glorify fame, vanity, short cuts, and ego at every turn, than a guy who represents the ultimate in those admirable traits? Who better to represent the utter classlessness of the masses than a guy who thinks nothing of saying the 'c' word to a room full of women, or, better yet, referring to his johnson during a televised debate? Who better than a shameless reality show star to head a country obsessed with shameless reality show stars?

Furthermore, ask yourself, how is it that a guy without any type of comprehensive and/or intelligent platform - for anything -, a guy who seems to wear the labels bigot, racist, and misogynist as badges of honor, a guy who will happily get down in the mud and hurl insults and profanity at anyone, even heads of state, and a guy whom even the wackos on the far right are calling a wacko, built up such a seemingly insurmountable lead over the rest of the candidates in his respective party?

When you're done with that, ask yourself how this low-class windbag manages to dominate the conversations of almost everyone, everywhere, on an hourly basis - be it democrat, liberal, or republican - and, further, how has he managed to get even the most respected news sites, including this one, to devote page after page to his nonsense? Answer: Idiocy. We're fascinated with idiots. We celebrate idiots. Be it on T.V., on the Internet, in our daily lives, and, of course, in the White House.

The downside is, our fascination with idiots is fascinating in the same way watching a plane crash is fascinating. Except, who do you think are on board this plane? We are. Actually, we are the pilots, but, for as long as we can remember, we've been conditioned by the airline to think we're just the passengers, so we're content to simply put our heads between our knees and hope for the best.

Meanwhile, as we nosedive, we're not using our God-given brains to remember our training and how easy it would be to simply pull up on the stick. But, let's face it, at this point, we're picking up so much speed per second, the odds of us being able to think clearly and right the nose, so we can land this baby safely, are definitely against us. We'd need to work together to figure this thing out, and we're simply too busy screaming at each other to do that.

With that in mind, it's no wonder so many of us want to give up and take the easy way out by blaming everyone else for our problems. Which is what a candidate like Trump, and (ahem) some other notorious figures throughout history, have capitalized on.

After all, we're living in an era that personifies not just asking what your country can do for you, but demanding it do it now, or else! And, considering we, in our social-media obsessed lives, seem to help perpetuate that sentiment, who can blame us?

Every time we turn around there's another mass shooting, another corruption scandal, another example of the banks kicking our asses and laughing, another Supreme Court betrayal, another politician entrusted with protecting his fellow citizens who ends up protecting himself, etc. etc. etc. It's like living in the most far-fetched version of society in the most far-fetched plot Terry Gilliam could think up. And, short of everyone suddenly doing a 180 and deciding to take responsibility for themselves, the only thing that will save us, all of us, is to let it happen.

We need a guy like Donald Trump the same way a meth addict needs to hit rock bottom. Only then, when we've hit the wall and truly lost everything, will we truly accept the wisdom and support an "intervention" could provide. Only after we've squandered every dime, wasted every opportunity, abused every relationship, violated everyone's trust and respect, and become the laughing stock of the civilized - and not so civilized - world, will be able to Make America Great Again.

Short of that, how great will it be to see President Trump greet the Queen of England with the old, "Pull my finger!" classic?