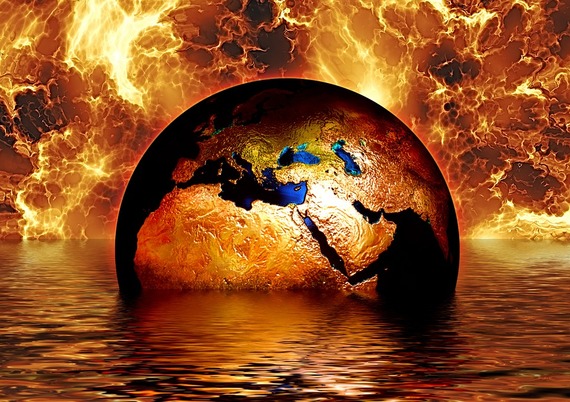 Photo by Geralt via Pixabay

How often have we acted like the world was going to come to an end if we didn't lose 10 pounds before somebody's wedding, or we didn't get some job we thought we had to have, or we were publicly exposed as an embezzler, which we had been trying to hide for years? Usually these events come and go without the world ending - even if our world is shaken, even badly shaken. But if Trump wins the presidency, the world will literally come to an end, at least as we know it. A climate change denier, Trump's proposed policies would doom our nation and our world to ever-increasing climate disaster, as the scientific community has warned us; pollution would run even more rampant; and our rapidly declining wildlife population would continue to catapult toward extinction.

Have we really reached the point where our egoic, self-centered behaviors will decimate our habitat and the habitat of all the creatures on the earth? And will that finally destroy this experiment called humanity, which has wreaked havoc every place it touches? Is that what God wants?

Some religious people would say that our destruction is written in the stars, and that it's just retribution for our "sins." And there would be some truth to that - although I would put it differently. I would say that if we self-destruct, it would be the result of our short-term self-centered thinking and our addiction to "me-consciousness." Unconsciousness or sin. Either way, it comes down to us.

But is that really God's decision, or is it ours? I say it's ours. So when you vote this year, remember what you are choosing: a climate-denying candidate and party dedicated to putting profits above the continued existence of our earth. Or a flawed candidate who is nevertheless aware of the precariousness of our very survival and who can be supported to accelerate environmental policies that might just keep us from extinction.

I don't know what God thinks, but I know which I'm choosing. I am putting aside any hesitations and voting for a continued future. Please join me.

Beth Green is founder of TheInnerRevolution.Org, host of Inner Revolutionary Radio on VoiceAmerica.com and creator of Beth Green TV & Radio on YouTube. You can download a free version of Beth's book Living with Reality at www.theinnerrevolution.org. And follow us on Facebook and Twitter where we're building an online community of people who are fighting for a revolution toward Oneness, Accountability and Mutual Support.