Americans' trust in all institutions, including government, media and business, has dropped across-the-board after a slight rise in 2010. In a post announcing the suspension of his campaign for the Republican nomination, as he had done on the campaign trail, Jon Huntsman decried a "deficit of trust" in the United States. Such a deficit is particularly troublesome in today's economic environment. Research shows that there is a trust-growth nexus: Nations with higher levels of generalized trust among their citizenry perform better economically. Not surprisingly given recent economic performance, the U.S. ranks relatively low in levels of trust in society when compared to other industrialized countries. While we may in fact face a trust deficit, identifying potential sources of the problem is not exactly front-and-center in the remaining Republican candidates' stump speeches. In fact, the frontrunner, Mitt Romney, has said that at least one source of this trust deficit is best discussed in "quiet rooms." And what is one potential source for this trust deficit? Economic inequality, plain and simple.

There is a growing appreciation for the fact that economic inequality in the United States has reached a critical level. Since the 1970s, the U.S. has seen a steady rise in the Gini Coefficient: a commonly used measurement of the difference in the income of the wealthiest and poorest segments of society. The higher a nation scores on the Gini calculus, as the U.S. has done repeatedly over the last 40 years, the higher the income inequality within its population.

Recent polls indicate that Americans are uneasy with the present state of American economic inequality. According to a recent Pew Research Center poll, 77 percent of those interviewed felt that too much power is concentrated in the hands of the wealthy and large corporations, and 66 percent believe the system unfairly favors the wealthy. Another recent Pew study found that 66 percent of those polled found there to be "very strong" or "strong" conflicts between the rich and the poor in this country. Similarly, in a recent survey of a range of individuals across the political spectrum, an overwhelming number of those surveyed stated that they would prefer to live in a society that had a more even distribution of wealth than that found in the U.S., and most participants underestimated the degree of wealth disparity in the U.S. Moreover, the survey participants were asked to choose between two hypothetical societies, with different levels of wealth inequality. What they did not know was that they were essentially being asked to choose between Sweden and the U.S. in terms of wealth distribution. Across the political spectrum, an overwhelming number of survey participants -- 92 percent --chose Sweden over the U.S., and even study participants who voted for George W. Bush in the 2004 presidential election still preferred Sweden to the U.S. by a margin of 9-1. 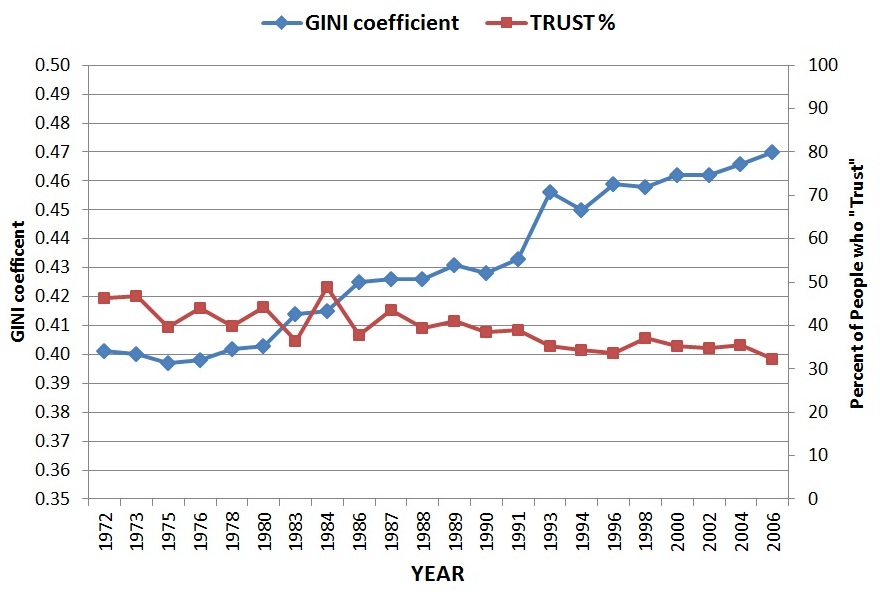 While merely pointing out this growing gap is enough to raise objections that one is engaging in "class warfare," if one is truly concerned with economic growth and bringing the U.S. out of the current recession, policymakers and elected officials need to address economic inequality as swiftly as possible. Just as there is a trust-growth nexus, there seems to be an inequality-growth nexus: that is, nations with higher income inequality generally have lower levels of economic growth.

But how does economic inequality relate to trust? And how can addressing trust improve the nation's economic prospects? The likely connection is the concept of social distance. Social distance is a reflection of the ways in which individuals see each other as different from one another. The greater the social distance between individuals, the more likely it is that they will not trust each other, and engage in less cooperative (and sometimes predatory) behavior. Since all economic activity requires some degree of cooperation and trust, as Nobel-prize winning economist Kenneth Arrow points out, if individuals are less trusting of one another because of the social distance between them, economic activity tends to slow, or becomes rapacious.

In some ways, the roots of the present financial crisis can be traced to this connection between social distance and predation. States with higher income inequality, on average, have lower generalized trust and higher mortgage foreclosure rates. Since many foreclosures can be tied to flawed mortgages, written by mortgage originators seeking to make a fast buck, they were, no doubt, the product of predatory conduct.

Will income inequality become a focus of this year's presidential election? Romney, the odds-on favorite to win the nomination, seems to embrace inequality itself, saying that those who raise the issue are engaged in the "politics of envy." On the Democrats' side, one of President Obama's chief economic advisors, Alan Krueger, gave a well-publicized speech that may have signaled that the President's re-election campaign may center around growing income and wealth disparities. Does this mean that this year's race is shaping up to be the Inequality Election?

Politics aside, in order to promote economic growth, work must be done to restore the trust-growth connection, and in order to restore this connection, policies that reduce income inequality can help rebuild trust by reducing social distance. Nowhere is this better achieved than in tax policy, and Ian Ayres and Aaron Edlin have proposed a triggered tax hike on the richest 1 percent that will go into effect when economic inequality hits a certain threshold. This is certainly a good place to start.

Alexis de Tocqueville famously praised the "equality of conditions" that were critical building blocks of democracy in 19th-century America; in order to address the trust deficit, and strengthen economic growth, tackling economic inequality may just be the challenge of not only the next election, but also the decades to come.