We had a lyricist from Lebanon and an arranger from Iraq. We had a melody composed by Quincy Jones. A Libyan, Egyptian, Palestinian, Syrian, Saudi and Emirati were among 26 artists joining recording sessions in Morocco and Qatar. Our result was sweet music -- a hypnotic hit that raised millions for impoverished children's arts education across the Middle East. It was a literally harmonious case of art transcending politics and improving lives. 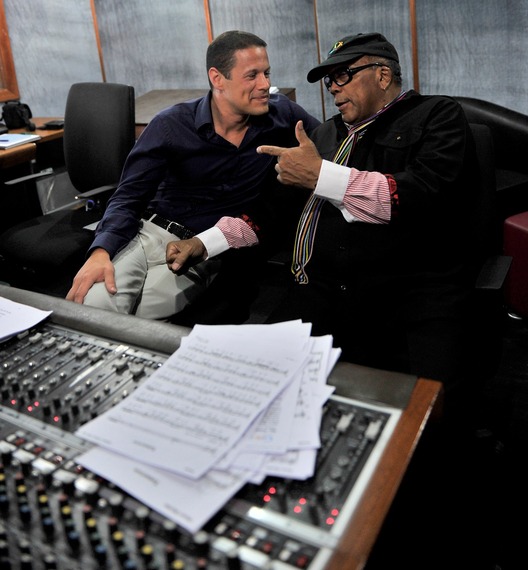 I expect few Americans are aware. In fact, I suspect few know much at all about the artistic side of the Middle East. When we get press attention, the datelines are apt to be scenes of misery and strife: Syria, Egypt, Libya.

My brother Quincy Jones and I want Americans to have a fuller story.

We see music and art as cultural bridges from the Middle East to the world. The arts offer the best representation of a people. They transcend politics, race, religion, color and language.

Our charity hit was "Tomorrow/Bokra," bokra being Arabic for "tomorrow." We made it happen through the Global Gumbo Group, the joint venture Quincy and I launched to seed global opportunities for Middle Eastern and North African artists. I am no artist myself, but a businessman from the Emirate of Sharjah, of the United Arab Emirates. I know, however, when it comes to engaging and connecting young people and transforming hearts and minds, art out-muscles any business plan.

Art can also accomplish pragmatic, important things. To hear what I'm writing about, search "Bokra" on YouTube, where we have nearly 10 million hits to date.

"My dream is for these kids to be free to dream for themselves," says Quincy.

But now our work has won notice in the States. For the work of the Global Gumbo Group, the Kennedy Center's International Committee on the Arts honored Quincy and me with its annual Gold Medal in the Arts.

Attention from the likes of the Kennedy Center puts us in closer touch with friends abroad and adds credibility to our efforts at home. But I would particularly like this recognition to serve as the threshold of new, deeper cultural exchanges with the United States.

The Arab world can learn much from the diversity of U.S. culture. Some here might call into question some of its aspects, but nobody can argue its global impact. American music, food, movies and even sports teams have instant recognition and worldwide power. We in the Middle East would do well to learn from some of these examples and embrace culture and art as life tools. We hope to pursue more projects like the Middle East Theatre Academy, which seeks international exposure for young actors, directors, and producers from my region and which I am honored to back with actor-philanthropist Kevin Spacey.

You surely know Kevin, but chances are you cannot name a top Arab actor -- or pop star, poet or painter. It is a dream of mine to see that change and see my region produce cultural ambassadors appreciated, as yours are, around the world. We have begun to build the bridges with art projects that unite and sustain us.

As we stretch beyond all borders I am confident that tomorrow -- bokra -- looks bright.

Badr Jafar co-founded the Global Gumbo Group with Quincy Jones in 2011. He is the Chief Executive Officer of Crescent Enterprises