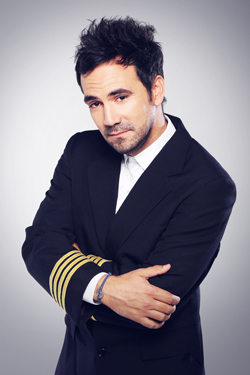 There is a new (French) kid in town and he's not afraid to aim his slingshot at the established cultural giants. Such audacity is only possible when that new kid has already established his credentials outside of Las Vegas. Alex Goude is a familiar face in France due to his career as television host and theatrical director. But of course fame and achievement outside of America can mean little to an American audience, and deciphering the charming French accent can be a challenge for many.

Goude however, exudes that undeniable star quality that buttresses his new show "Twisted Vegas" at the Westgate Las Vegas Resort & Casino's International Theater, where the original Elvis Presley performed. Not to be outdone, Twisted Vegas also features an Elvis, played by 4'2"-tall Greek actor Dimos. In fact, all the Las Vegas tourist favorites appear in some form in this show - with of course, a satirical twist. Celine Dion, dubbed 'The Queen of Las Vegas' is a prime target for parody, and French singer and impersonator Costic has her moves nailed down to a tee. 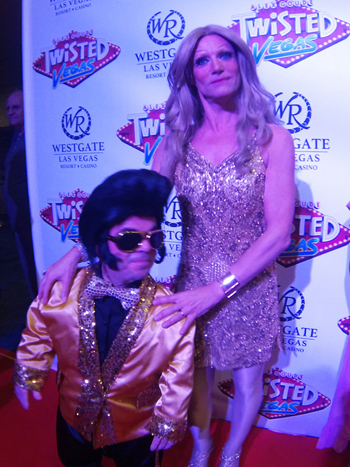 Dressed in a smart pilot's uniform, the suave Goude is indisputably at the controls on this irreverent journey through Las Vegas culture, directing our attention to points of interest en route. Cirque du Soleil, who continue to dominate the theatrical entertainment scene with eight shows currently running in Las Vegas, offer a goldmine of material to Goude and his co-writer and director Michael Goudeau. The strength of Twisted Vegas is in the delivery of a cheeky, low-budget, but fun and high-energy alternative reality to the super-slick, big-budget Las Vegas productions.

Las Vegas landmarks also make an appearance in this 75-min twisted tourist trip. The Bellagio Fountains performed by audience members is a show highlight. And the final destination? A happy-ever-after wedding chapel scene of course, twisted Vegas style, with whichever lucky (or unlucky if shy and retiring) audience member catches the bouquet.