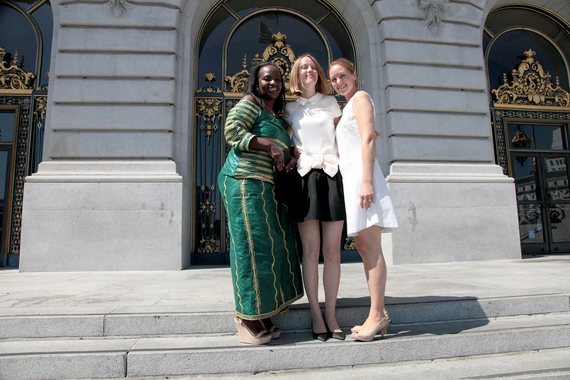 Imagine a Ugandan Parliamentarian, fresh from signing a petition to bring back the Anti-Homosexuality Act (AHA), walking down the Castro marveling at all the rainbow flags, awestruck by the notion of a "gay" neighborhood.

She walks up the stairs of San Francisco City Hall to encounter a "just married" lesbian couple, at first thinking they were mere bridesmaids, and then being told they were brides. She congratulates the couple, takes a "selfie" with them, and exchanges email addresses.

She is moved to tears when hearing Harvey Milk's story for the first time, while standing in front of his bust at City Hall.

She has never seen gay people or lesbians show public affection before. Later that day she commented, "I saw the joy in their eyes -- everyone should have the right to such happiness."

In December 2013, Honorable Nabilah Naggayi Sempala, woman Member of Parliament for Kamapla, had purposely stayed away from Parliament avoiding the vote for the Anti-Homosexuality Act (AHA). However in August 2014 she signed a petition in support of bringing the Bill back to Parliament.

Much to the dismay of the LGBTI community in Uganda, the perceived ally seemed to change her stance, seemingly endorsing her support in a videotaped press conference that followed.

I called Hon. Sempala directly. She told me that she had signed the petition under extreme pressure, emerging from a shadow cabinet meeting, to the waiting arms of press and opposition, with fellow MP's from the majority ruling party, NRM, insisting that if she did not sign the petition in that moment, she would be "working against the people and not for the people."

After speaking to her at great length, I realized that her insider perspective would be most valuable toward dissecting the complex milieu surrounding the AHA. I invited her to San Francisco, on her way back from a conference in San Diego, to meet with politicians, leaders and to engage in dialogue at a forum open to the public, through the pilot organization I am directing, The San Francisco Africa Leadership Institute (SFALI).

Before extending the invitation, I checked in with prominent and also grassroots members of the LGBT community in Uganda; not one criticized the event, some endorsed it and a few submitted questions that they wanted answered publicly.

When we spoke on the phone, Hon. Sempala told me that she believed that her already controversial seat was at risk, as well as her personal safety, and with hardly much time to think, she signed the petition, and was ushered into a press conference where she, in her words, "cynically" noted that she was "pleased if the Bill came back, only if it were to include heterosexual males who practiced sodomy with their wives." She informed me that she realized that Parliament would never support such an extension to the AHA. She felt that in effect, her caveat was the best she could do to nullify her perceived support.

Sempala said that she regretted her political acquiescence. She reiterated this in the forum in San Francisco.

Many were disappointed that she did not show courage, and that she gave in, politically, to the pressure. "She is no hero," noted a disgruntled Ugandan LGBT human rights defender, "but maybe she did it for politics. I still hope she is our friend."

The Bill has been a political tool used for years by Ugandan politicians, to suit their purposes, tapping into its huge popularity amongst the Ugandan populace.

By virtue of the passing of the Act and President Yoweri Museveni's assent, it is clear that the forces within Uganda and abroad, seeking to thwart its initial passage, were unsuccessful. In many instances we may have added fuel to the fire or provided the impetus for what became America vs. Uganda. (See TIME interview with Nicholas Opeyo.)

Sempala's appearance in San Francisco gave us important behind the scenes insight, created bridges and provided Sempala with a deeper understanding of LGBT people. She took a risk being here - speaking openly on American soil does not serve Sempala's political career and may actually work to hurt her.

The dialogue and meetings with women leaders and a Californian politician proved to be an edifying experience for all involved. While the ultimate result will remain to be seen, she provided much useful information and engaged in critical dialogue; we opened doors and established bridges.

The path of a woman MP is complex and much different to male counterparts in the Ugandan patriarchal Parliament, and the Sempala visit helped us understand these challenges and complexities, all of which should be carefully considered when some lean toward applying western neo-colonialist impositions on Africa.

Sempala is one whose reflections assert that she believes strongly in human rights for all, and who made a momentary political choice that stings and hurts those she really would prefer to help. I see former President Bill Clinton as a friend who had to make difficult and shameful political choices, which served to sting and hurt those he would like to have helped. (Circa the '90s DOMA and DADT.) I certainly would not have withdrawn my Clinton support because of his political choices, given the alternatives, any more than I would refuse to dialogue with Sempala. It is also important to note that the political realities between an American President and a Ugandan Parliamentarian are much different -- the latter's life would be at stake in a city where mob-justice is not uncommon.

She commented on how difficult it is for people in Uganda to get to know LGBT people, because people do not come out for fear of anti-gay retaliation. She said meeting gay couples was a special eye opener and noted that if more could have this experience, it could dispel the myths and lies about LGBT people.

I see Sempala as a credible and valuable ally, desperately trying to survive a torrid political realm. Given this deeper understanding and through further bridge building, there is much global advocates can do to avert the played out neo-colonialism that has served only to harm, rather than to help.

For a more detailed version of this post, more pictures and to see the SFALI's video clips of Melanie Nathan interviewing Hon. Sempala at the Forum please click here.