There are many reasons to love the holiday of Easter. Here is mine: while Christmas nowadays is more or less the same everywhere -- a truly globalized event, celebrated from Alaska to Zimbabwe with decorated pine trees, Silent Night and a jolly fat man in red pajamas -- Easter has managed to preserve its diversity, its many ancient faces and flavors. The Philippines have their flagellants, Seville has its local chapel of the Ku-Klux Clan, while the Brits merrily roll Easter eggs down the hill, and there is only a small risk that you could mistake one country's tradition for the others'. On Easter, you always know where you are.

On the Cycladic island of Paros*, Lent culminates in a series of Byzantine tableaux vivants, a Good Friday tradition in the village of Marpissa .

Marpissa is a small place, even by local standards, counting fewer than 800 souls on an island with a total population of 17,000 permanent residents. One night every year, however, half the island seems to crowd into Marpissa's narrow lanes to look at a series of tableaux vivants where local villagers take up the poses of the characters in famous Byzantine icons, a sort of Greek Oberammergau without action, words or straggly beards.

There are 17 such tableaux every year, scattered throughout Marpissa's village centre, and the procession -- featuring local islanders as well as visitors from mainland Greece and all over the world -- starts at the main church after the Good Friday service at around 10 p.m.

The stations of the procession resemble an extended way of the cross, building up from Jesus's entry into Jerusalem on Palm Sunday ... 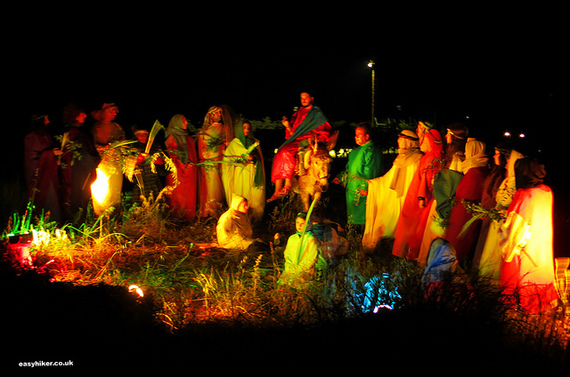 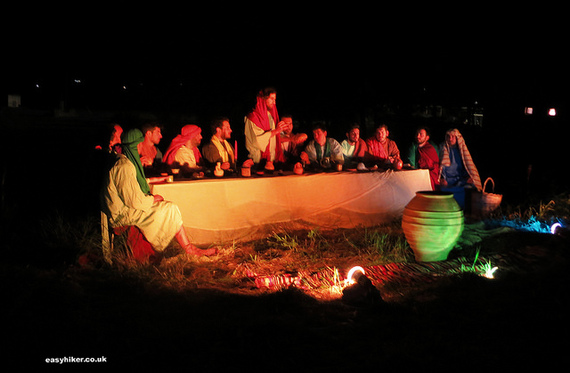 ... and the moment where Pontius Pilate delivers the judgement demanded by the mob ... 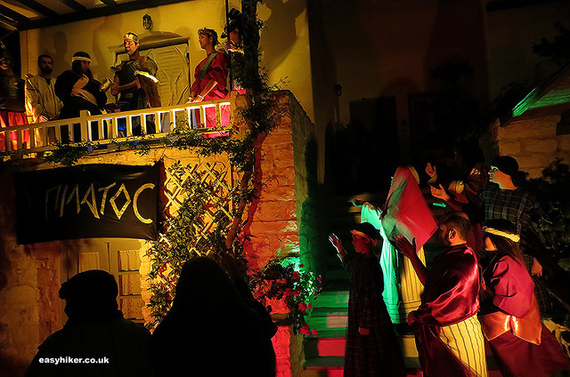 ... to the lamentation and descent from the cross. 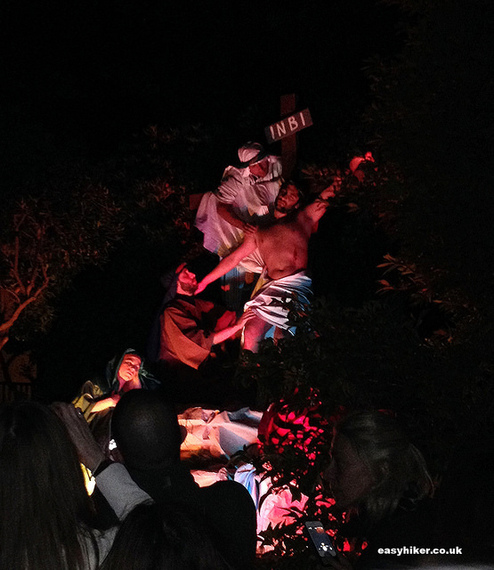 The "actors", all volunteers from the village and neighbouring towns, have to hold their poses for at least one hour (depending on the length of the procession), rain or shine. Or blow, one might add, with reference to the blustery northerly wind which made the conditions on the Friday we saw it much more unfriendly than you would expect them to be at such southern latitudes in late April.

Only once in living memory, on a particularly cold and wet night a few years ago, did the organizers consider to call the whole thing off, but even then, they ultimately decided to go ahead and let all participants brace the rain.

The biggest mishap our knowledgeable and charming guide Christina Fokianou -- until last year a regular member of the cast herself -- could remember was the time when an overexcited donkey refused to carry Jesus into Jerusalem and opted instead to run off into the night, to much hilarity presumably, Good Friday or not. (It seems that they do not know their W.C. Fields in Marpissa -- otherwise they might have remembered that it is never a good idea to share a stage with children and animals, not even for Jesus Christ.)

Marpissa's Good Friday celebrations go back to a village school tradition: about a hundred years ago, a school teacher thought that it would be a good idea to involve children at an early age into the preparations for the holiest day of the year. Even today, many children and, perhaps even more surprisingly, many people in their teens and twenties are actively involved in the festivities.

After the procession is over, at around midnight, the local youths then assemble in the bars and nightclubs of the near-by coastal resorts to celebrate Easter their own way -- the modern part of an old tradition.

(*The Cyclades, found between Athens and Crete, is the biggest group of Greek Islands of which Paros is the 3rd largest. In antiquity, it was considered part of the Athenian empire and later of the Venetian empire. Nowadays, it is the favourite destination for those seeking a quiet beachside holiday. Paros, Ios and Milos are three of the favoured Cycladic islands. Find out more about the Cyclades Islands in my blog.)