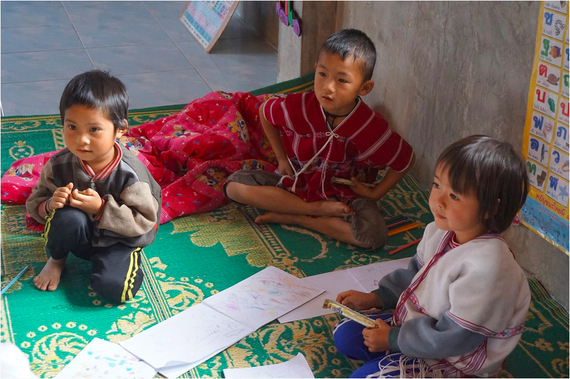 The road is impossibly steep and dusty. Even with three years of experience on a motorbike, I'm glad to be sitting in the back of a pickup truck, holding on for dear life as we careen around hairpin turns over patches of loose gravel. I watch in disbelief as a family of four scoots past us on an ancient Yamaha, the children's faces shielded from the choking dust by pieces of colorful Karen cloth.

This is the road to Mor Wah Kee Community School, a rare bastion of the disappearing Karen culture of Burma and Thailand, tucked into the forested mountains about 50 miles from the Northern Thai city of Chiang Mai. The treacherous road conditions haven't stopped its 57 students and teachers from making the trip daily -- for some, up to four hours there and back on foot. Barefoot, so they don't ruin their one pair of nice shoes.

Just a few days ago, the school finished building a set of dorms that will allow students to stay at Mor Wah Kee during the week, cutting their commute time down to weekends only. But as of this month, the school has lost its long-term funding for daily operations, and its future remains unclear.

To understand why Mor Wah Kee is so vital, you have to understand a bit about Karen history. Indigenous to Burma (or Myanmar, as the military regime calls it), the Karen people have inhabited the country since long before it was even technically even a country. Their cultural history is ancient and rich and their numbers total around eight million. But like most of Burma's many indigenous groups, the Karen have faced great hardship and displacement amidst the longest-running civil war in history.

Mass killings, village burnings, and systematic rape at the hands of the highly xenophobic Burmese Army have driven many Karen people across the border to Thailand. Here many live without citizenship, as refugees in camps or undocumented people forced out into the forested mountains. Their fundamental human rights are denied by the Thai government, which continually demonizes and demeans them, and without Burmese or Thai citizenship they are stateless, with no county to call home.

Nonetheless, many Karen children attend government schools in Thailand, where they learn Thai language and Thai history as part of the state-run curriculum required for all students. Mainstream textbooks often undermine and stigmatize Karen culture, causing lots of students to reject their cultural identity. Very few schools offer Karen language classes, even as an elective.

This is a problem around the world for diminishing indigenous communities. As Judith Thurman pointed out recently in The New Yorker, linguists suspect that by the end of this century as many as 50% of the world's languages will be reduced to the archives. And when a language dies, so does much of the culture and history of its people.

"When I was a student myself, we learned only one curriculum, and we were only recipients of the things other people gave us. But they didn't give us our own knowledge," says Boonchai Niruchakun, a Karen educator and former director of Mor Wah Kee School. "If we studied in the cities we had to forget about our identities."

This is what the Mor Wah Kee community has set out to change. Their unique school is the result of a grassroots movement designed to revive Karen culture by and for Karen people.

Established in 1992 by the villagers themselves -- despite the Thai government's repeated attempts to kick them off their land -- Mor Wah Kee School teaches a mixed curriculum of Thai and Karen language, culture and history. It is one of a kind, but hopes to act as a model for future schools. Because it's run by the community, not by the government, all the teachers are Karen. They receive a smaller salary than the average Thai public school teacher, but are proud to be a part of something so powerful. The students too are instilled with a sense of pride -- long displaced by geography, war, and circumstance -- in preserving their own living legacy. Mor Wah Kee is, in the truest sense of the cliché, a labor of love. 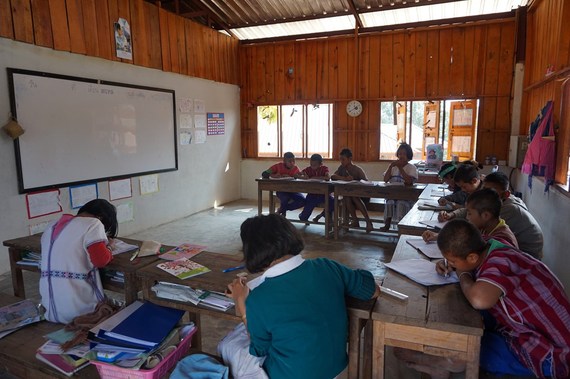 The dedication of the teachers to this school is inspiring. In a country known for its poor public education system, the teachers of Mor Wah Kee preside over a vibrant self-constructed curriculum. Their students alternate rapidly between Thai and Karen language and transition easily from math class to music lessons, where they sing an ancient folk song accompanied by a traditional Karen harp. Even the youngest set listens attentively to the history of their ancestors, tragedies and triumphs alike.

In 1997, a violent Burmese Army general named Maung Aye went on live television after the surrender of some Karen resistance fighters in Burma. He stomped on a Karen flag and proclaimed, "In 20 years, you will only be able to find Karen people in a museum."

Nearly 20 years later, the people of Mor Wah Kee are a living testament to the fallacy of this hateful claim.

This year, Mor Wah Kee saw its first two alumni graduate from college, and two more enter to begin their secondary degrees. When I asked a classroom full of sixth graders who else wanted to go to college someday, nearly all the hands shot up.

Unfortunately, however, if the community cannot scrape together the necessary funds to keep Mor Wah Kee open, it's possible that this unique school, and all the others it hopes to inspire in its wake, will be lost.

Given that the average household income in the area is less than three dollars a day, it's unlikely that the community will be able to do this on their own.

There is hope, but help is needed. Earlier this year, local NGO Daughters Rising stepped in to help finance construction of the new dormitories. Now, they are in the midst of trying to raise another $13,500, which is all that is needed to pay the teachers' humble salaries and keep the Mor Wah Kee School open for another year.

Want to help? Click here to learn more about the Mor Wah Kee Community School, and the preservation of Karen culture for generations to come.