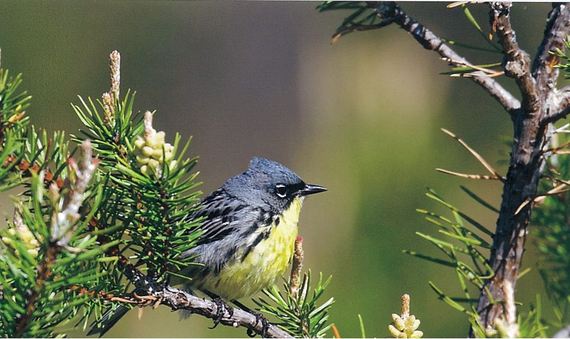 The Kirtland's warbler is a conservation success story and one that exemplifies the positive impact of the Endangered Species Act. As the population stands solidly in recovery and the Act celebrates its 40th anniversary at the end of this month, Kirtland's warbler is getting ready to move out from under legislative protections and into a future of sustained conservation - the ultimate goal of any endangered species. This monumental move - a move that not many listed species have achieved - can't happen without securing financial support for the management programs Kirtland's warbler depends upon for survival. That's why Huron Pines has joined the CrowdRise Holiday Challenge to raise $10,000 for the Kirtland's warbler. You can help by donating to the effort between now and January 9, 2014.

In this week's post, Kay Charter of the Kirtland's Warbler Alliance, celebrates the rare beauty and incredible comeback of Kirtland's warbler, and argues that Michiganders in particular should take notice of this special bird.


If you know that our 37th president requested an endangered species act from Congress in 1972, you win the history trivia prize of the day. Add bonus points if you know when that president, Richard M. Nixon, signed the act into law, he said, "Nothing is more priceless and more worthy of preservation than the rich array of animal life with which our country has been blessed."

Four months after Nixon signed his law on December 28, 1973, a small songbird lifted off from the Bahamian island of Eleuthera on her way to breeding grounds in Michigan. With a gray back and pale yellow throat, breast and belly, her plumage was lighter and more subtle than that of the male who would become her mate. Still, she was beautiful.

She would not be making a marathon journey like that of some of her distant relatives, like the blackpoll warbler, which migrates non-stop over the Atlantic Ocean an incredible 2,200 miles in fall. But her trip was not without considerable risk. Weather and other challenges faced her as she made her 1,500-mile voyage.

The little bird arrived on the jack pine barrens in our northern lower peninsula in May, a week or so after the males had returned. As with most songbirds, the males reach nesting grounds first, each carving out his territory quickly. In relatively short order after her arrival, our bird selected her mate from among those with the finest habitat in which to raise her young.

She picked the spot for her nest in the ten acres her mate was protecting, placing it close to the edge of his territory. He moved the boundaries in order to reduce the amount of land he needed to defend from predators and other males of his species. As the female built her nest of leaves and grass, her mate began bringing her food. After she lined the nest with moss and deer hair, she laid six speckled, cream-colored eggs in it.

Two weeks after she laid the last egg, her chicks hatched. Ten days later, the chicks were out of the nest. From the time the chicks hatched until four weeks after fledging, both parents fed their young.
This female was a Kirtland's Warbler, and she carried out her nesting cycle in a jack pine barrens on a sandy outwash plain that has been followed by virtually all in her family from the glaciers' retreat more than 10,000 years ago.

By the time President Nixon signed his Endangered Species Act, this warbler was already in trouble. Although always a rare bird, the population had declined in 1971 to only 200 males. By the time my husband and I first saw it 16 years later, the bird's numbers had sunk to 187 males. Our guide said it was almost certainly headed for the black hole of extinction. That was an unthinkable possibility for a bird lover who had just adopted Michigan as her home state.

The species was initially described in 1851, but the first Kirtland's Warbler nest wasn't discovered until 1903 in Oscoda County. For more than ninety years, all subsequent discovered nests were within sixty miles of that site. Since then, a small number of nests have been located in Wisconsin and southern Ontario.

With the help of Nixon's ground-breaking law, Kirtland's Warblers were brought back from the brink. Today, with more than 2,000 males, the population has increased by more than ten times since its nadir in 1987. In spite of the handful of nests outside of our state, Kirtland's Warbler has always been, and will remain, Michigan's bird. As we approach the 40th anniversary of the Endangered Species Act, we in Michigan have an extra reason to celebrate: the current healthy population of our own very special bird.

Kay Charter is passionate about birds and bird conservation. She is co-owner of Charter Sanctuary, a member of the Kirtland's Warbler Alliance and Executive Director of Saving Birds Thru Habitat in Omena, Michigan (savingbirds.org). Support the incredible comeback of the Kirtland's warbler and celebrate the 40th anniversary of the Endangered Species Act by donating through the CrowdRise Holiday Challenge.

Huron Pines is a 501(c)(3) organization and an equal opportunity provider with a mission to conserve the forests, lakes and streams of Northeast Michigan. Learn more about our projects by visiting www.huronpines.org