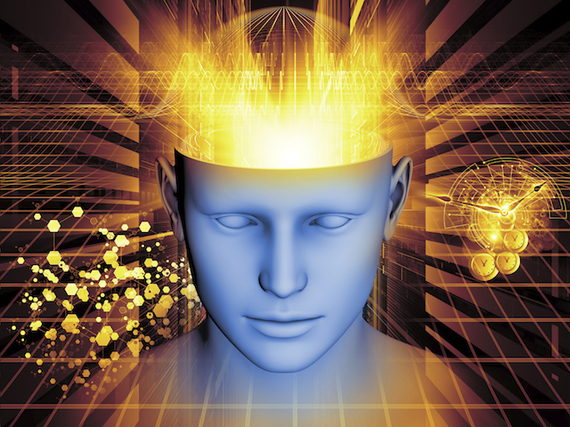 Yesterday was a very off-the-grid day for me. It began as most of my days do here in San Miguel. I slept until I wasn't tired. I meditated. Then I checked my email. Upon noticing the internet was down, I got the keys to my out-of-town neighbor's apartment, let myself in, booted up my Mac, and logged onto a webinar I very much wanted to attend.

So far, so good. The sun was shining. Donald Trump was not yet President. And to my left, wrapped in silver foil, I saw something that looked like gum, so I opened it up and, seeing that it wasn't gum, but a small bar of chocolate, broke off two pieces and wolfed them down.

The webinar -- all about the phenomenon of "collective narrative" -- was surprisingly captivating -- so instead of playing the role of passive webinar participant, I decided to accept the moderator's invitation to enter comments in the chat box. "The world is an illusion, but you have to act as if it's real," I wrote, quoting Krishna.

The webinar presenter, savvy business consultant, Peter Block, seemed almost Zen Master-like in his demeanor. Deep. Sagacious. And astoundingly precise. The more I listened, the more inspired I got, almost as if I was on the receiving end of some kind of cosmic transmission -- what spiritually-minded people would call "shakti".

Wow. This webinar was definitely impacting me. Fascinated with what I was learning and feeling a sudden need to stretch, I entered into a series of standing yoga positions that looked nothing like the ones in the books I'd bought, but never read.

Webinar over, I began packing up my stuff, but the process of packing seemed to be taking a very long time.

"Hmmm", I thought to myself. "Maybe it had something to do with me trying to process all of the cool wisdom about story that had just been shared with me."

Possible? Sure, why not? Who knows how the mind works and how it affects the body. Yes, I was moving more slowly than usual. And yes, I was feeling light-headed, but hey, I was living in a mountain town 6,000 feet above sea level! The air was thin and I, most surely, was not getting my usual dose of oxygen. Strange. I was feeling strange. Not bad strange, mind you. Good strange. Fun strange -- the kind of strange where nothing mattered and everything mattered both at the same time.

Home now, I entered the kitchen and began talking to Evelyne, my dear, sweet, wife, who mentioned that I seemed to be 'in a very different place than she was.'

"Are you OK?" she asked, a look of concern in her eyes.

Yes, I was talking. That I was sure of. But my syntax and pacing were odd -- almost as if I was translating a Dead Sea Scroll in a language I didn't quite understand. Feeling a need to lie down, I found my way to the bedroom, turned on some music, and flopped down on the bed when all of a sudden it dawned on me that my light-headedness had nothing to do with the thin mountain air, and must have been health-related -- that I was likely experiencing the slow motion onset of a heart attack -- you know, what happens to men my age who haven't had their cholesterol checked in a while.

"Great!" I thought. "I'm going to have a heart attack in Mexico. Who knows if they'll even accept my health insurance?"

The good news? I wasn't panicking. Not in the least. No, I was far more curious than fearful -- fascinated to discover if I had the power in me to neutralize the onsite of a heart attack through the skillful use of my mind. So I... slowed... my breathing down... way down... the kind of down I imagined cave-dwelling yogis do when they hibernate for the winter. It worked! And thirty seconds was all it took! I wasn't having a heart attack any more! I was just feeling good. Really good.

About this time, Evelyne informed me, from the kitchen, that I absolutely needed to take our neighbor's dog out for a walk and pick up the laundry three blocks away. While her request seemed poorly timed, I realized that, earlier in the day, I had promised and, being a man of my word, decided to follow through. Stuffing some pesos into my pocket, I walked downstairs, fetched the dog, and began the three block trek to my local lavendaria.

As I walked the back streets of San Miguel, it soon became obvious that my gait had a bit of a stumbling quality to it. I wasn't so much walking as meandering. Yes, technically speaking, I was moving forward, but not directly forward -- an experience I realized was not all that uncommon in beautiful San Miguel, what with the cobblestone streets and so much beauty to distract you. So I let that thought go, but then another took its place -- a now very familiar thought -- the heart attack thought -- the same one I had just minutes ago in my light-filled apartment.

Could it be? Was this really happening to me? Was I just about to die? Passing out on the street, near the intersection of Refugio and Vergel, would not be a good thing. First of all, I had no clue how to say "Excuse me, I am having a heart attack. Please take me to the nearest hospital." And secondly, I didn't want to worry Evelyne.

Clear that dying of a heart attack was not a good idea, I immediately returned to my earlier mind-over-matter practice and simply gathered my centrifugal energy. Bingo! Victory! It worked like a charm. Suddenly, I was not having heart attack. On the contrary, I was having some kind of spontaneously occurring spiritual experience -- an unexpected opening of my kundalini, I think, or my chakras, or whatever happens on the inner planes when someone becomes awakened.

Possible? For sure. Why not? Indeed, I had often read about this kind of unexpected infusion of mystical power -- much like the New Jersey housewife, years ago, who suddenly was able to channel enlightened souls from the great beyond -- or Meher Baba, one of my early teachers, whose own teacher hit him between the eyes with a small rock, causing him to wander around India for weeks, totally out of his mind.

"God intoxicated" was the phrase used to describe him. "Ecstatic."

Might this be the state of consciousness I had unexpectedly entered into? I mean, really, I was blissed out of my tree -- in a state of pure being -- a realm I might never return from -- most likely, my new normal -- a realm of existence that was clearly going to require some integration on my part. That is, if I was ever wanted to find my socks again.

Flashing on my list of undone tasks for the day , I remembered I had a conference call coming up with a prospective client from a large corporation -- a call to explore my ideas for how I could help 1,400 of their tax auditors, in just 70 minutes, become more innovative.

As I announced this to Evelyne, upon my return, she was not, shall we say, confident I was in the right frame of mind for such a communication. Always the optimist, I assured her I was fine and proceeded to lie down on the bed to organize my thinking. Ninja-like, I started writing notes on a yellow legal pad, three pages worth -- very little of which was legible -- when I realized that the real point I wanted to make on the call was not a point at all, but a question -- perhaps, even, THE question: "What do you want to create?"

I mean, really, if a multi-billion dollar organization wanted me to have some kind impact on 1,400 of their tax auditors in just 70 minutes, it sure seemed important that I understood what outcome they were looking for. Right? So I jotted down my question, dialed the number, and proceeded to have an extremely lucid 30-minute call with two women from the financial services industry who, it seemed, were becoming increasingly intrigued with what I had to say -- so much so, in fact, that they asked me to submit a detailed proposal by the end of business day Friday.

It was 3:30 pm when the call ended. Remembering that Evelyne and I had guests coming for dinner in three hours, I began rallying my troops, some of whom most definitely had deserted. I washed some dishes. I set the table. I found my stuff and cleaned it up.

Dinner was fantastic. The conversation was inspiring. Many jokes and stories were told. And then, about 45 minutes into the meal, my downstairs neighbor, having just returned from his day trip to Queretaro and wanting to thank us for taking care of his dog, walked into the kitchen and started talking to Evelyne. I could hear loud laughter. Much loud laughter. Borderline hysterical laughter.

Then they both appeared in the dining room.

"How was the chocolate?" my neighbor asked. "Did you like it?"

A great silence filled the room. Ahhh.... NOW I understood! The chocolate I had eaten six hours ago was not your average piece of Mexican chocolate. It was, shall we say, of the "medicinal" variety -- and the amount I had eaten was more than enough for two people. Cosmic shakti coming through my laptop? No. Slow motion heart attack? Not quite. Thin mountain air? Uh uh. Spontaneous spiritual transmission from the great beyond? Not today.

Those, of course, were all great stories -- narratives I had told myself several times today, but they were pure fiction. The real story -- the story behind the story -- was the story of how I am, just like you and all of of the other 7 billion people on planet Earth, a story-making machine, a spontaneous crafter of tales. Something happens -- a thought, a word, a deed, a moment in time -- and we do our best to make sense out of it, connecting the dots in our own curious, mood-driven way.

We perceive. We conceive. We interpret. We express. Our choice? To embrace it all. To enjoy it all. To go with the proverbial flow. And, most importantly, to realize that we are the Writer, Producer, Director, and Star of our own show.

Mitch Ditkoff lives in Woodstock, NY and is the author of Storytelling at Work.