Of all the research I've done to date, perhaps the most important is the forensic genealogy I do in conjunction with the Army's portion of the repatriation efforts of the Joint POW/MIA Accounting Command (JPAC). Though many don't realize it, "no man left behind" is much more than an expression. The U.S. military genuinely does all it can to recover soldiers from all conflicts, and for more than a decade, I've had the privilege of contributing to cases pertaining to WWI, WWII, Korea and Southeast Asia.

My role entails finding the soldiers' next of kin as well as particular relatives to potentially provide DNA reference samples to help identify remains, and as an Army brat whose father served in Vietnam, I can't think of any more meaningful work. It gives me a deep sense of satisfaction each time one of "my boys" (I tend to get a little possessive, and even though it's tempting to think of the soldiers as elderly men since they mostly lived and died before I was born, I remind myself that the majority barely made it past their teens) is identified and buried.

Recently, I was asked to speak about this work and found myself struggling with how to convey the considerable scope of this initiative while not losing sight of the sacrifice of each individual soldier. I ultimately decided to create a wall of honor featuring names of those whose cases I've had the opportunity to research and then single out selected soldiers to tell their stories. Veterans Day seems an appropriate time to share a portion of this.

PHOTO GALLERY
Veterans Day Tribute to Those Who Are Still Coming Home - from Vietnam, Korea, WWII and WWI
Download
Calling all HuffPost superfans!
Sign up for membership to become a founding member and help shape HuffPost's next chapter
Join HuffPost 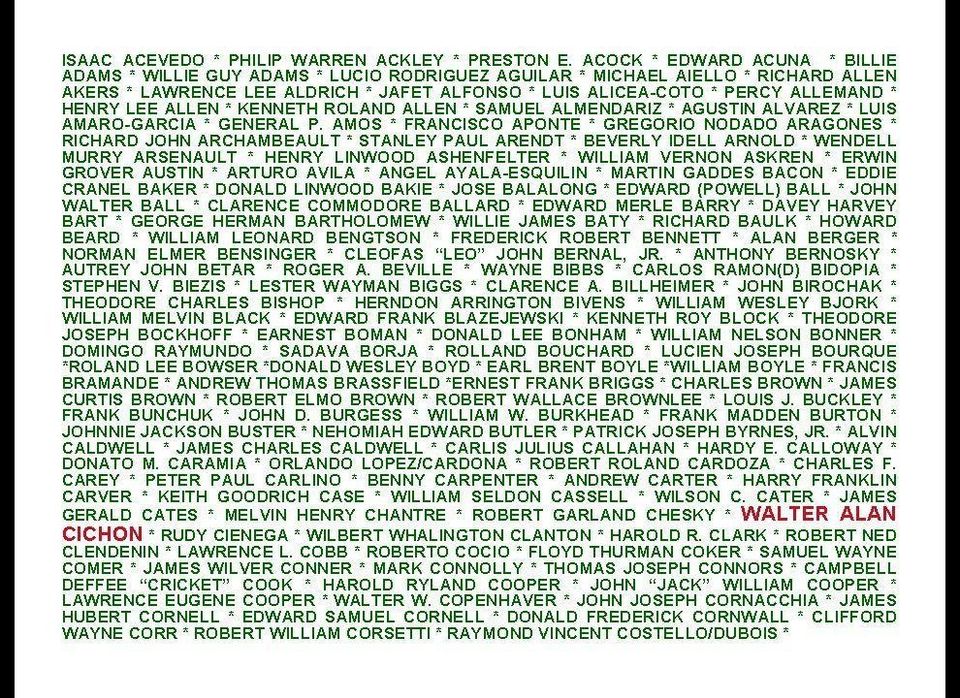 1 / 5
Walter Alan Cichon
You probably haven’t heard the name Walter Cichon, but if he hadn’t lost his life in Vietnam, there’s a good chance you would know it. He was the charismatic lead singer of a band called The Motifs, and one of the many who aspired to be like him was a young fellow named Bruce Springsteen. Here’s what Springsteen had to say about Walter Cichon when introducing his song, “The Wall,” at a concert: <em>“Uh, the lead singer was kinda this, this beautiful guy that had this really, very funky and unusual voice, and, and the thing that was important was that you could get up close to them, and they didn't mind us, but, you know, pushing the girls away in the front and standing all night in front of them and, and watch them how they were playing and, and what they were doing. There was two brothers, they were called the Cichon brothers. One was Walter and, and one was Ray. Ray was the guitarist. And they were incredibly uh, important to, you know, the early stages of early development. They were there at the end of the night. You could talk to them and they could show you how to do things and ... I wrote this song for Walter, Walter Cichon. He … was killed in Vietnam. This is a song I was down ... [clears throat] I was in Washington, I was visiting the wall, and I wrote this, wrote this for him.”</em>