The Kuomintang (KMT) government in Taiwan lost a huge election to the Green Party, called the Democratic Progressive Party (DPP) led by Tsai Ing-wen. The outgoing Ma government, the Blue Party, fell way short in the 2016 presidential election by chumming up to the government in Beijing, China. This is the usual political split in Taiwan with the Green Party wanting to stay a safe distance from China, while the Blue Party wants to get closer. In this election, the majority of voters in Taiwan clearly want to keep a safe distance from China by giving both the presidency and the majority of the Congress to the DPP for the first time in Taiwan's history.

Mr. Ma did his best to move Taiwan closer to China and absorb the massive human rights violator as kin, maybe even as the same household of government. The young in Taiwan wanted no part of that future. They turned themselves into real freedom fighters to resist a service trade pact with China, railroaded by Ma and his KMT accomplices in Congress to pass the pact in 30 seconds without any discussion. This service pact could have opened a flood gate to let in a human tsunami of Chinese and taken away the future of Taiwan. These young people started a revolution, known as the Sunflower Movement. They occupied the hall of Congress for over a month and successfully nullified that service pact. They also demonstrated and marched, while absorbing the usual pushes and shoves, in forms of police baton and water cannon, from the KMT, the descendants of Chiang Kai-shek. The foreseeable future was seen in the election of mayor of Taipei, plus several other major cities, going to another green brother in November 2014, which turned out to be the beginning of the end for KMT.

However, the landslide victory of Ms. Tsai may not give Taiwan as clear a path to be recognized as a sovereign country as many pro-independence voters would have hoped. Ms. Tsai's goal seems to be of a caretaker. Just keep the status quo of Taiwan as it is, nearly free but still under USA protection due to the decisions of WWRII and still hold on to the so called ROC (Republic of China) Constitution, in which the territory of ROC still includes the current PROC and Republic of Mongolia; ridiculous but true. 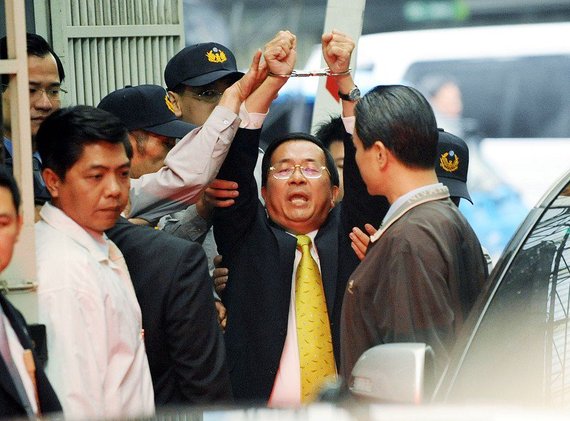 The political trend and direction to move away from China were set firmly when Chen Shui-Bian was elected president of Taiwan in 2000 and re-elected in 2004. He came from the Green Party, the DPP. During his eight years of presidency, other than completing many major projects, such as the high speed train system, all well under budget, his greatest contribution could be his advocacy of 100% freedom of speech and his push toward Taiwan-centric education to teach students about Taiwan's culture and history instead of those of China as KMT had done in Taiwan for over fifty years. As a result, Mr. Chen himself had to endure bombardments of smears and slanders thrown at him and his family almost 24/7 from all sorts of pundits, news media and TV stations, still mostly controlled by KMT at the time. However, those eight years had created an entirely new generation now in their twenties, denoted as twentyish voters by New York Times, and they call themselves, a naturally pro-independence generation. According to the poll, this generation, aged 20 to 29, voted overwhelmingly for the DPP at nearly 90%, while less than 10% voted for the KMT. Their voting rate was near 75% compared with just over 66% for the overall voters.

Despite being a brilliant and clever lawyer, mayor and President, Mr. Chen was immediately sent to prison after his second term was up. The trial was a mix of confusion, controversy, and violation of due process of law, which resulted in Mr. Chen going to prison for a combined sentence of twenty years on seemly uncountable corruption charges.

But to me and many others, his prison time was set up in such a way as to kill the man. The cell was small, his time out of the cell was short, the lights were kept on, and he shared the cell with another inmate. In addition, all the files he needed for his defense were in that small cell, and thus he slept on the floor, next to a non-flushable toilet and unable to stretch his legs. Due to the powerful smear campaign by the KMT, the country was led to believe that Mr. Chen was corrupt and was embarrassed that their man was such.

He and his case were neglected. He was injured by this treatment. He began to have serious medical problems. A small group of doctors looked out for him. Human rights people visited him, including Amnesty, plus some US congressmen. They all called for a medical release. Even some blue camp people also felt that Ma should let this man out of jail. Finally, after many visits, many blogs, and many procedures, he was given a bed in the hospital. Again, those who cared about justice and the man worked hard, and finally they got him home to recover in January 2015.

A broader community was being built to review his case. Mr. Chen deserves a new trial or complete release/amnesty from the new government. My hope is that he will be given a new trial because I believe he is innocent of any crime. To me, he is innocent until proven guilty. But certainly, the new president might consider washing the slate clean and return Mr. Chen to a full and complete release. For the sake of reforming Taiwan's judicial system to avoid similar injustice, all the abuses or even crimes of the prosecutors and presiding judges should also be reviewed by an independent panel.

While the Tsai government wants to steer itself carefully along a precarious path, turning away from either independence or ties to China, President Tsai also needs to look inside Taiwan and resolve this wound in the history of Taiwan.