When ten of the 18 years spent on death row are also spent without sight of the sun, what could the view of the weather be? This wasn't quite the question initially posed of former death row inmate Damien Echols when he met Buddhist priest T.K. Nakagaki for one of the Rubin Museum's series of conversations in New York City this fall. They were brought together to talk about karma. But they ended up talking about the climate, and its current disruption, and the mindset required to address it:

Taking a Life
There is possibly no action that has more irreversible consequence than the taking of life. Damien Echols was charged as one of the "West Memphis Three" with having taken part in the murder of three 8-year old children. He was convicted and served over 18 years of his life on death row. He was released on an Alford plea - an unusual compromise in which the defendant - while still professing innocence - admits that the prosecution has enough evidence that is likely to persuade a judge and jury that the defendant be found guilty 'beyond reasonable doubt' . It has two immediate effects: the defendant is immediately freed from prison; and the state can never be sued for wrongful imprisonment.

Murderers and the Buddha
Murderers, accused or otherwise, have a place in Buddhist lore. There is the story of Angulimala, the young, impressionable Brahman who was goaded into killing 999 people and wearing their chopped fingers as a garland around his neck. The Buddha was able to intervene before the thousandth crime was committed with a trick of perception that allowed Angulimala to come to a realization of how blindly he had misguided himself. Through his crazed obsessive actions he had narrowed his own options to the point of no return. With the epiphany, he was later to became one of the Buddha's most devoted disciples. When Damien Echols came to discuss the nature of karma with a Buddhist priest at the Rubin, the subject of injustice might have weighed heavily on the evening. It was there, for sure, but right away the focus of the evening turned to this other instructive premise: If karma is a philosophical tool to help you understand the restrictive nature of your habits that further limit your options, what happens to someone who finds absolutely every option closed to them behind the walls of a cell in solitary confinement on death row?

Go through life a victor
Echols described advice he received on his very first day from an inmate who was to become a Buddhist priest: "You can either turn this cell into a monastery and learn and grow, or you can sit in here and go stark raving nuts". He subsequently put into practice an esoteric meditation skill that became his lifeline, and allowed him to perceive a world beyond the cell walls. "You can go through life being a victor or you can go through life being a victim. You are still going to have to face your karma," he affirmed.

Where the greatest risk lies, also lies the potential for greatest reward.
An audience question prompted Echols to admit that without this extreme deprivation of freedom, he would not have grown. "The one thing that makes us a little wiser, is pain." This theme was carried over into the response to another question about the issue of climate change. Could the pain of having to confront this enormous challenge to humanity actually improve us? 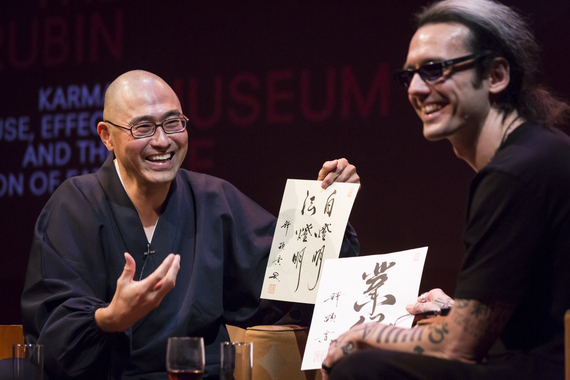 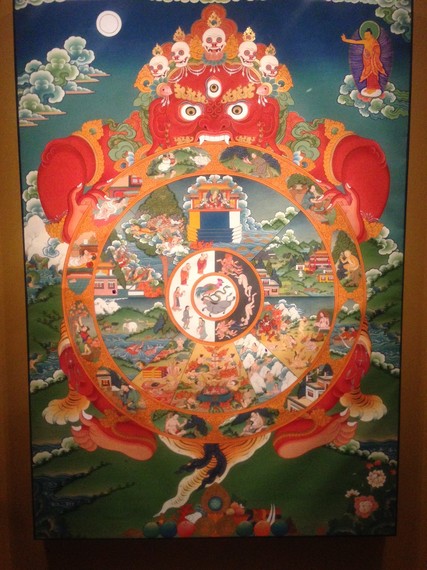 A visitor's view of the Wheel of Becoming - a traditional 101 guide to the Buddhist principles of karma - outside the newly installed Tibetan Buddhist Shrine Room on the fourth floor gallery of the Rubin Museum of Art in New York City.