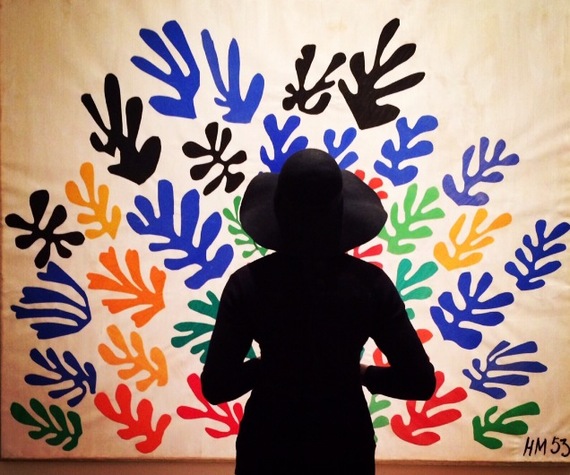 It was a heavy Sunday morning, the kind that anchors you in bed until the urgency of your to do list somehow overcomes your procrastination. The neverending winter cloud cover over New York City had begun to take it's toll. Drained of my usual ambition, I was still in denial that tomorrow was Monday... I hadn't hit rock bottom just yet and so to keep avoiding the impending wave of misery that was preparing for the long cold week ahead, I slipped out of bed and slowly began moping about my apartment looking for inspiration to help shed my bout of wintry sadness.

And there it was on my Instagram feed: "This is the final weekend to see 'Henri Matisse: The Cut-Outs!'" -- @TheMuseumofModernArt

The Museum of Modern Art had on display a collection of one of the most significant artists of the 20th century whose work hadn't been shown in such depth here in New York City since 1961. I had meant to go see the Henri Matisse exhibit since opening day in October 2014, but never got around to it for what now seemed the reason that here on its last Sunday showing, I would find motivation to lighten up a bit.

And so I made the trek up to 53rd and 6th ave with @aronska, who happened to be a member at MoMA. With such a privilege and starting at only $85 a year(tax deductible), we skipped long line after long line of checkins and pick ups. Like our visit to The Met, we picked up portable audio iPods to guide us along our journey; I highly recommend doing this when visiting any museum.

Henri Matisse was a French artist who originally mastered drawing, sculpting and painting. In the last decade of his life, his wife had left him, he was diagnosed with cancer and he had to run from the war (WWII) that followed him from Paris to Nice, until he safely settled in Vence. Suddenly my reasons to lament all morning seemed unworthy...

After enduring intense surgery for his cancer, Matisse was bed- and chair-ridden and could no longer cultivate works through traditional methods of drawing and sculpting. And so he picked up a pair of scissors and inevitably birthed a new medium of art.

With the help of assistants, Matisse would produce works made of colorful and artfully placed cut outs of paper. His lack of mobility inspired him to create evolved large murals that brought garden and swimming pool scenes indoors to enjoy without venturing.

MoMA perfectly plotted Matisse's journey to the large scale. We viewed an early piece, small and framed, laden with pins and tacks that flimsily held together cut outs of colorful paper. By the end of the tour, we were faced with entire walls of colorful collages, seamlessly attached to sprawling white canvas that stretched entire walls of the museum.

My favorites were: 'The Blue Nudes', 'The Sheaf' and the grand 'Parakeet and The Mermaid'. Impressed with the imposing color and scale of his late works, Matisse left me with no reason to depart but with a lifted mood. -- @NanaMeriwether