This summer, I visited Ground Zero and the 9/11 Memorial for the first time. I was returning from a trip overseas and had a few days to spend at my leisure in New York before heading back to Houston. Over a decade earlier, the Sept. 11 attacks had forced me to become much more cognizant of the world around me and motivated me to pursue the interfaith, civic, and community service activities I'm involved in today. I wasn't leaving New York before witnessing the site with my own eyes.

A plethora of emotions overcame me as I viewed each historic area. My mood was somber as I stood next to the 9/11 Memorial reflecting pools and paid my respects to the deceased, whose names are forever engraved there. The small museum with its charred relics belonging to victims and rescue workers served as a sobering reminder of the horrific manner in which those precious lives were lost. Although saddened, I also felt hopeful as I watched the cranes and workers reconstruct what had previously been destroyed there by ignorance and hate.

During my visit, my thoughts drifted to the families and friends of the thousands of victims who perished on that horrendous day. This year, as they do every year, they will remember being glued to their television screens while they watched the airplanes collide into the World Trade Center, over and over again. They will pause to reflect about their loved ones whose time on this earth ended so suddenly and tragically that morning. And finally, they will ponder over how their lives have changed these past 11 years without them.

I was also aware of how strange I, a hijab-wearing Muslim woman, must have looked, standing at the site of the attacks that many people (either consciously or unconsciously) associate with my Islamic faith. I was born and raised in this great country and posses a patriotic love for my nation and her people; but for all they knew, I was associated with the enemy.

Despite that feeling, I stood my ground. It was important that I be there to experience that piece of history and pay my respects to the innocent lives which were lost on that day. As an American, how could I not? These were my fellow citizens and their pain was my pain as well.

Today, we hear politicians and Islamophobes using the tragic events of 9/11 to foster Islamophobia around the nation. Unfortunately, their tactics are working, as evidenced by the recent mosque attacks and Muslim witch hunts on Capitol Hill. But what these individuals don't consider (or choose to ignore) is the incredible disrespect they are displaying toward the victims of these horrific attacks. Their loss and the loss their families deal with every day is a mere pawn for their political gain.

I said a short prayer for the victims, their families, and even the pundits that were selfishly desecrating their memories before I left. The sounds coming from the construction were still faintly discernible as I headed back to my hotel. It was a meaningful reminder of the work that not only needs to be done at Ground Zero, but also within our society and political system as well. And that while life will go on, the memories of the lives lost 11 years ago will forever remain honored in our hearts.

Below are some photos from my visit to the 9/11 memorial: 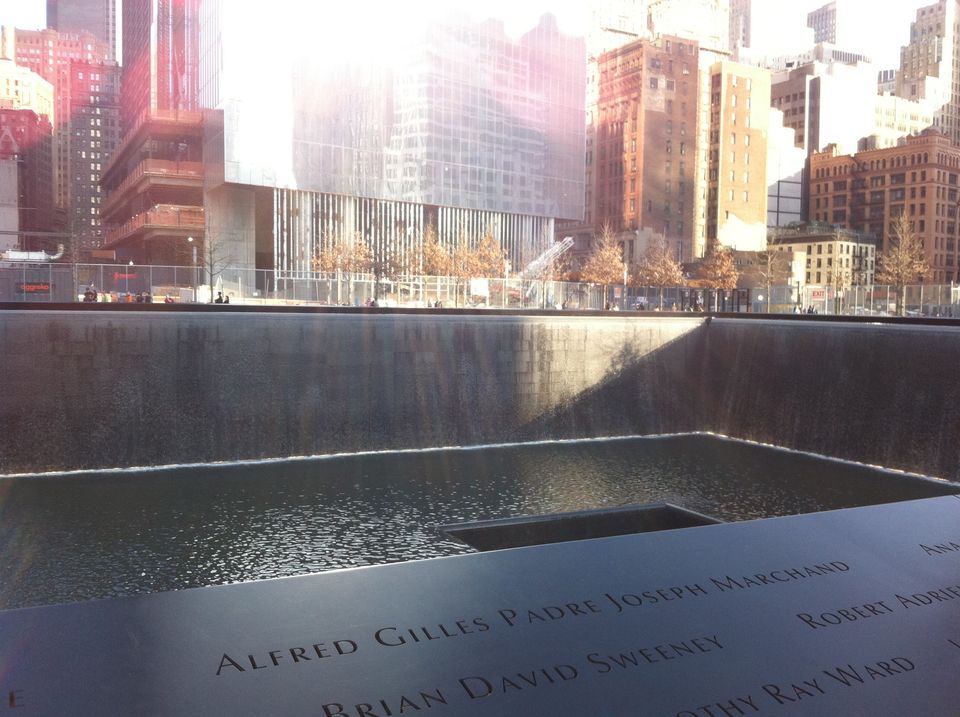