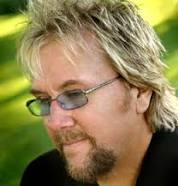 Q: You are best remembered for the song "Biggest Part of Me." What does that song mean to you?

A: A simpler time. It means a lot in more ways than I can possibly describe. That song has traveled beyond my wildest dreams. Mostly I love that it connects me to people around the world. Remember back in the day when stars had theme songs? Bob Hope had "Thanks for the Memories" etc. I guess you could say it's my personal theme song. You didn't know I am the love doctor?

Q: How did you come to write it?

A: 4th of July 1979, morning...family was packing up car to drive to Malibu for private celebration. Car was running... I went back to my studio guesthouse to shut off the gear, sat at piano for a moment, and the chords appeared under my fingers. I turned on the portable cassette recorder and laid it down in a couple of minutes. Then ran back to the car and we took off. The next day I played it back, and wrote the bridge and lyrics...very quickly. It was early summer. That's key. My favorite feeling of the year. I wanted Ambrosia to have a signature vocal group call and response song. So that had something to do with it as well. My previous hit "How Much I Feel" had that lead vocal and wall of group harmony thing happening. So I was in pursuit of a vocal sonic identity for us. This was back when radio and TV was all that we had. No internet, mobile phone, etc.

Q: Do you still tour with Ambrosia?

No. That ended about 14 years ago.

Q: A number of the artists are lead singers who have left their bands. That is a phenomenon that happens frequently. Has that happened with you? What is that like?

A: It's not necessarily lead singers that "have left, or abandoned" their bands, it can be growing in different directions. Or it can be a band no longer swimming in the same direction. It can be hard to admit it when a band has run its course. A band is also a complex social microcosm, believe me, and when it's a bunch of single guys making a run for the top, it's one thing; but with marriage, children, maturity, values change, and priorities change. If you are U2, you are one of the rare bands that can weather it all. For me, it was an emotionally difficult transition. Ambrosia had some great years, I'm gonna stick with that memory.

Q: You're identified with a certain sound-the late '70s early '80s West Coast/AOR pop scene. What do you love about that music? Do you see that music ever making a full comeback or do we hear it today?

A: I'm was and am still very into the art of the West Coast pop scene and it's supreme creators like the genius and beautiful heart of Brian Wilson dreaming up what he calls "pocket symphonies" in songs like "Good Vibrations" and "Surfs Up"... and fully orchestrated pop albums concept albums like Pet Sounds, that inspired the Beatles. I grew up 10 minutes from his house, so there's that local connection too. All music that is great music is what I love in whatever genre or form. You recognize it right away. It has that "thing" you can't explain. Certain artists are starting to hit it in today's generation. Ryan Tedder of One Republic is one of them. He's mixing quite a brew of irresistible elements and the world is rewarding him greatly for it. I'm close to his father Gary, who, by the way, will join me onstage (this is a news flash for Ryan Tedder fans!!) on Sept 7 in Huntington Beach! My friend Robert Coppola Schwartzman, formerly leader of Rooney, is a young man who draws a huge amount of inspiration from 70's and 80's music. I go to his Hollywood studio and he plays me songs I didn't even know from my own era. And then he uses that to infuse his own amazing music. So I have hope that our songs and our generation continues to inspire others.

Q: You've been working with Rick Warren, pastor of one of America's largest megachurches. How do you collaborate and what has the relationship meant to you?

A: I searched most of my adult life for a pastor and teacher I could relate to, and almost gave up. Then my wife Stacey and I read Rick's Purpose Driven Life book, while living in Redondo Beach, and just had to attend a service at Saddleback church to meet the man behind the book. Everything changed after that. We canceled our plans to move to Nashville, and 7 1/2 years ago moved to Orange County with our son who's now going on 9. It was the best decision of our lives. I've had the honor of helping Rick whenever and however I can. We've done things where he's asked for my assistance, such as bringing the Jonas Bros. to Angel Stadium for the 30th anniversary of Saddleback--that was amazing; I produced a CD for his PEACE initiative called "The Purpose Of Christmas" that raised almost $500,000 for his missions work; and I sing at the church when asked. I brought James Ingram there a few years ago and we did "Yah Mo B There"; brought Wynonna Judd for our first AIDS conference, etc. I presented him with a custom made "purpose driven" Taylor guitar on that occasion that he says he plays daily, I love that. He never ceases to amaze me especially because he is honest about his own shortcomings and his own physical challenges which are far greater than anybody knows. And as a musician who is 100% deaf in my left ear for 35 years, I relate. You realize there are more miracles going on around here than anyone really knows in this regard.

Q: Will he be coming to the festival?

A: I don't know. It is a Sunday and we are in a great new series about how to overcome being "Overwhelmed" so...? While Rick is a total music lover, and will grab a guitar and break into "Doo Wah Diddy" at a moment's notice, I'm not sure he'll have the time on a Sunday to be there. But I know he'll be there in sprit pumping his fist in the air with the best of 'em!

Q: What do you miss most about the era when you were most active with Ambrosia?

A: The fact that music WAS the real cultural center of our generation; there was no distractions competing for our attention. We are all overwhelmed by too many choices these days. I miss waiting for the new Beatles album, or Pink Floyd's new one. Genius on that level we may never know again. I miss the way music used to "sound" too. Crappy sounding MP3's, like Neil Young says, that cut out 70% of the sound we worked so hard to achieve is the prevailing sound. To me a lot of digital sounds like the "rrrrzzzzzzz" of an electric shaver, or gritting your teeth all the time. Analog distortion was cool, but digital distortion is real ugly. Digital done wrong and you have aliasing problems and interference with the natural harmonic overtone series, where you can feel something is just "not right" altogether sonically. I'm encouraged that vinyl record sales are up like 400% ...a good sign. I miss the innocence. I miss the friendliness all the artists mostly had for one another. The Doobie Brothers and Ambrosia toured. We had rented a bus. After the 1st couple of shows and hanging out, they said "get rid of the bus, save yourself 10,000 a month, and come on our private plane--the Doobie liner" ...we became a "road family" and best of friends. That spirit is what I miss. But I don't sit around thinking these things. I live in the present and I'm hopeful this generation will figure all this stuff out for themselves! '

Q: You're producing an event with some of the biggest rock acts in history. Tell me about that.

A: Huntington Beach Food Art Music Festival--on the beach on Sunday September 7th and I have put together 10 legends of pop/rock music to play their hits, with a supergroup backing them. We go on about 2:15 pm for a 3 1/2 hour beach party with 10 stars performing over 30 of pop music's most iconic hit songs. Artists performing are longtime friends: Al Stewart, Gary Wright, Bill Champlin/ Chicago, Mike Reno/Loverboy, John Elefante/Kansas, Jim Peterik/Survivor, Kelly Keagy/Night Ranger, Bobby Kimball/Toto, Dave Jenkins/Pablo Cruise, and I will perform. This is all under the banner: David Pack's Napa Crossroads Live Presents. Napa Crossroads is more than a CD, it's also a new brand that helps connect people in unique ways, including live events. It's the first time ever, or maybe ever again, these artists will appear on one stage. It's the real deal.

Q: What was your inspiration for the event?

A: I just "got the call" from one of my best friends Del Williams, CEO of Right Arm Entertainment and Beacon Audio, asking if I was interested in helping create this once-in-a-lifetime climax segment to a 3 day Food, Art and Music festival in my hometown of Orange County--so Del, myself and concert promoter Jay Freedman/nFuse marketing, just kept growing it from 3 artists to 5, then 6 artists to 8...then 10! My personal inspiration is wanting to have the spirit of "friendship and celebration" between my artist friends, in the tradition of "Mad Dogs and Englishman" type of tours...or Eric Clapton, George Harrison and friends where real artist-friends collaborated and had so much fun, the audience couldn't help but enjoy themselves too. It's the end of summer so it's creating a new memory for the boomers and for the next generation, all generations, too. And it's the beach...that's my turf! I grew up in South Bay of L.A. surfing Redondo, Hermosa, etc. near the Beach Boys hometown, so there are many elements all coming together for this moment.

Q: Which artists are you most looking forward to hearing?

A: That's a loaded question Mark. ALL of them, and I truly mean it. Because every song marks a place in our lives and in our hearts that we can recall, and I love that younger generations seem to love and really "feel" these songs too. When you hear them by the original artists, writers or singers there's an authenticity that makes it powerful.

Q: Tell Me About your New CD Napa Crossroads?

A: Five years of my life spent collaborating on songs in collaboration with 5 of Napa Valley's most prestigious wineries and their CEO's. I wrote 2 songs per winery, functioning almost like a song-catcher. Real life stories, a real concept CD, a once-in-a-lifetime project all done in the heavenly Napa Valley. I wrote a song for The Doors' Ray Manzarek who lived there called "Silverado Free" as he lived off of famous Silverado Trail. It turns out to be his last great performance before we lost him last year. Every Doors fan needs to hear this--he was at the top of his game, truly, and even narrated the ending--I remixed it and made it a tribute to him. Guest artist friends like Todd Rundgren participated; Alan Parsons, Bela Fleck, David Benoit, Larry Carlton, Robert Coppola Schwartzman, etc. These are some of the best songs of my entire life. Every song written and recorded in Napa... and yes I was there a week ago for the great earthquake, it was a monster...almost threw me out of bed. And I'm working on a benefit in Napa to help the un-insured as we speak. Napa is my secret place of solace, beauty, prayer, meditation, joy, and so many great friends there. I feel a little closer to heaven when I'm there!